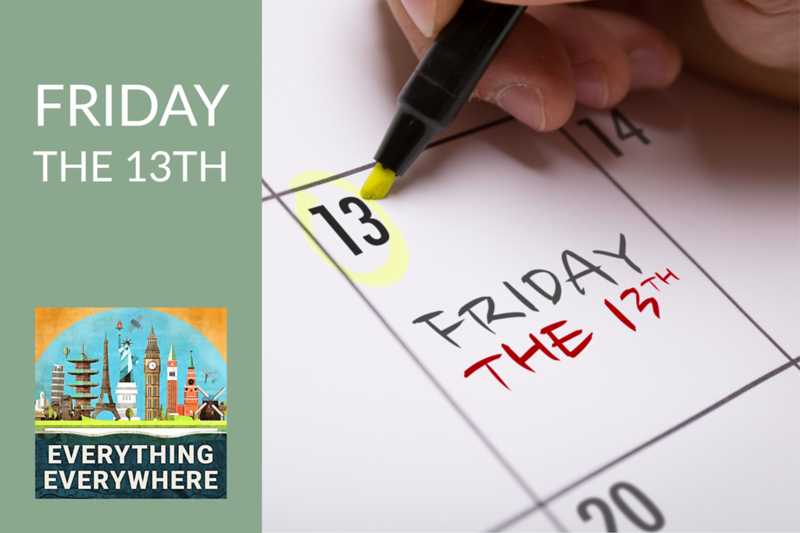 Friday the 13th is a day associated with bad luck and ill omens.

However, why is this particular combination of day of the week and day of the month considered bad luck?

If you think you know why Friday the 13th is considered unlucky, there is a good chance that the story you’ve heard is wrong.

Learn more about Friday the 13th and how it became associated with being unlucky on this episode of Everything Everywhere Daily.

Normally when I do episodes like this, I can start with some similar holiday from ancient history, which gradually morphed into the day we know today.

The funny thing is, this sounds like exactly the sort of superstition that would have some sort of ancient or at least mideavl origin.

There are two superstitions that do have ancient, or at least older origins, which did come together to form the Friday the 13th myth.

That has to do with the number 13 and, to a lesser extent, Fridays.

The superstition surrounding the number 13 being unlucky goes far back, and there are a whole bunch of different possible origins which might have arisen independently.

The reason why 13 is considered unlucky probably had to do with the number 12.

There are a bunch of theories surrounding this from many different sources.

One comes from ancient Norse legends.

According to legend, there were 12 guests at a dinner party in Valhalla when Loki, the god of mischief, showed up to be the 13th guest.

Loki then preceded to trick the blind god Hodr, the god of darkness and winter, to shoot his bow and kill his brother Balder, who was the god of light and joy.

Hence, 13 became an unlucky number. Remember that the Norse gods are where we get the names of the days of the week in English, so there were certainly Norse traditions that found their way to the speakers of Old English.

Another source has a very similar origin, and it comes from the New Testament. At the Last Supper, there were 13 people in attendance….not including cooks and wait staff, of course.

The 13th person was Judas Iscariot, who betrayed Jesus.

The Code of Hammurabi actually skipped the 13th law.

In the 19th century, there was an attempt to put aside the superstitions surrounding the number 13.

A civil war veteran named Captain William Fowler created the 13 Club in New York in 1881 with the express intent of thumbing their nose at the superstition.

There were over 400 members of the 13 Club in New York and it had five US Presidents as honorary members: Chester Arthur, Grover Cleveland, Benjamin Harrison, William McKinley, and Theodore Roosevelt.

There were similar 13 Clubs that sprang up all over the United States.

The attitude of the 13 Club was summed up by the American orator and lawyer Robert Green Ingersoll. At the meeting of the 13 Club on December 13, 1888, he ended his toast by saying:

We have had enough mediocrity, enough policy, enough superstition, enough prejudice, enough provincialism, and the time has come for the American citizen to say: “Hereafter I will be represented by men who are worthy, not only of the great Republic, but of the Nineteenth Century.

One thing which is of note, the 13 Club held their meetings on the 13th, but they didn’t go out of their way to hold them on Friday the 13th, which sort of indicates that the 13th falling on a Friday, didn’t hold any special meaning as least as far back as the late 19th century.

Of course, the 13 Club didn’t end superstitions surrounding the number 13.

As skyscrapers were built, they began to purposely avoid having floors with the number 13. Likewise, hotels and cruise ships will often avoid having rooms numbered 13.

A 2007 Gallop poll found that the number of Americans who would be bothered if they were given room number 13 is……13 percent.

You can’t make this stuff up.

The only failed Apollo mission was Apollo 13, and the disaster occurred on April 13th. The Space Shuttle program actually renumbered its missions to avoid a Space Shuttle mission 13.

The Space Shuttle mission, which would have been the 13th, actually landed on Friday the 13th, and the crew made an alternative mission patch with a black cat on it.

There is an actual clinical condition known as Triskaidekaphobia, which is a fear of the number 13. Supposedly Franklin Roosevelt and the author Stephen King were triskaidekaphobics.

The fear of 13 is very much cultural. In China and other East Asian countries, 4 is considered the unlucky number. Many new hotels in Las Vegas will not have a 4th floor and will even avoid all floors in the 40s.

In Italy, 17 is considered unlucky because, in Roman numbers, it is XVII, which can be rearragned as VIXI, which in Latin means “I have lived.”

In parts of Afghanistan, 39 is considered unlucky because it is three times 13.

Before I go on, I just have to note one major exception to 13 being unlucky…..Taylor Swift.

Yep, Taylor Swift’s lucky number is 13. She will often perform with the number 13 written on the back of her hand.

I supposed she would have Triskaidekaphillia.

The fact that 13 is unlucky is something that most of you are probably familiar with, but what does that have to do with Friday? Why not Monday the 13th or Saturday the 13th?

This has to do with another old tradition, which really isn’t that much of a thing anymore, which holds that Friday is the unluckiest day of the week.

No one really knows why Friday is considered unlucky, but it probably has something to do with Good Friday and Christ being killed on a Friday. There have also been stories about Noah’s flood starting on a Friday and Adam and Eve getting kicked out of the Garden of Eden on a Friday.

The fear of Fridays didn’t start to appear in writing until the mid-17th century.

There is a 17th-century poem that states, “Now Friday came, you old wives say, Of all the week’s the unluckiest day.”

The fear of Fridays didn’t really pick up until the 19th century.

In the Hone’s Year Book, which was like an almanac published in 1831, it said, “There are still a few respectable tradesmen and merchants who will not transact business, or be bled, or take physic, on a Friday, because it is an unlucky day.”

Shipbuilders would not lay the keel of a ship on a Friday, and farmers would try to avoid starting a harvest on a Friday. They would often go out on Thursday evening just to make a symbolic start, to avoid Friday.

So you had two unlucky things which were totally separate. Fridays and the number 13.

It was just a matter of time before someone put these two things together. If they were each individually unlucky, then together, then it must be really unlucky.

The first mention in print that anyone has found referencing Friday the 13th being unlucky was in 1868. It was an obituary for the composer Gioachino Rossini who died on Friday the 13th of November, 1868.

The obituary said, “Rossini was surrounded to the last by admiring friends; and if it be true that, like so many Italians, he regarded Fridays as an unlucky day and thirteen as an unlucky number, it is remarkable that on Friday 13th of November he passed away.”

This was just a casual mention, and it didn’t really reflect any broad-based fear of Friday the 13th, only the coincidence of the two things happening together.

What probably really kicked it off was a novel written in 1907 by Frederick W. Lawson titled: Friday, the Thirteenth. The novel tells the story of a man to takes advantage of the superstition to crash the stock market.

So the superstition must have existed before had for it to become a plot point in a novel, but the novel itself probably popularized it.

After that, references to Friday the 13th started popping up all over.

In 1908 a native American member of the Oklahoma legislature introduced 13 bills on Friday the 13th just to thumb his nose at the superstition.

In 1913 a pastor in Middletown, New York, offered to marry any couple for free who agreed to get married on Friday the 13th.

I should note that in Spain, Tuesday the 13th is considered bad luck. That is because, in Spanish, Tuesday is “martes” which is named after the Roman god Mars, who is the god of war, which is associated with death.

The clinical condition for someone who has a fear of Friday the 13th is known as para-skevi-deka-tria-phobia.

Now at this point, some of you might be wondering why I haven’t mentioned the thing that most people believe is the reason why Friday the 13th is unlucky: The Knights Templar.

The Knights Templar indeed ended as a religious order when King Philip IV arrested hundreds of knights and confiscated their property on Friday the 13th, 1307. That did happen.

However, the association of that event with Friday the 13th is a very modern invention that, by all accounts, can be attributed to….Dan Brown and his Da Vinci Code books.

The Knights Templar is a total retcon of the Friday the 13th story.

It has been a while since I’ve been able to rip on Dan Brown, but I’ll use this opportunity to do so again.

As for the date itself, there are some interesting facts about it.

Over a 400-year Gregorian Calendar cycle, the 13th of a month is more likely to land on a Friday than any other day of the week…..slightly. There will be 688 Friday the 13th’s as opposed to only 684 Thursdays or Saturdays.

There will be at least one Friday the 13th every year, and the most there can be in a single year is three. The next year with three will be in 2026.

In a year with three Friday the 13th, there will also be a pair which are only one month apart. This will always occur in March and April.

So, if you are listening to this on Friday the 13th, I wouldn’t worry too much about it. You are probably safe. And if by chance you happen to have paraskevidekatriaphobia, just switch over to the Julian calendar for one day, and everything will be alright.

Today’s review comes from listener BlondeNurseBarbie, from Apple Podcasts in the United States. They write:

I learned about this podcast from History Daily and have absolutely fallen in love with it. I can’t believe how much information is packed into each approximately 10-minute episode, with the flow of it being so on point. I feel as though I learn something continuously and am entertained at the same time. I’ve shared it with all of my friends and family. Good job, sir! Good job!

Thanks, Barbie! I’m glad you’ve told your friends about the show, which I assume includes Ken, Stacie, and all of your friends in the greater Barbiverse, and I hope you enjoy listening to the show at your Malibu beach house.