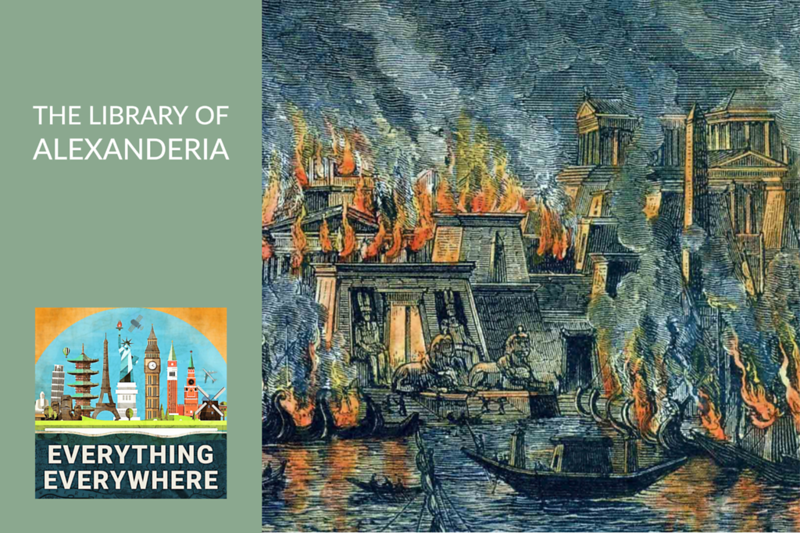 Sometime during the reign of Ptolemy I or Ptolemy II, the Egyptian state decided to build an institution dedicated to accumulating all human knowledge in the City of Alexandria.

As the city grew, this institution grew along with it to become the greatest knowledge repository in the ancient world.

…and then Julius Caesar burned it down. Maybe

Learn more about the Library of Alexander, how it was created, and how it ended on this episode of Everything Everywhere Daily.

The Library of Alexandria was the best-known library in the ancient world, but it certainly wasn’t the first.

We know of at least one collection of over cuniform Hittite tablets that were found in the modern-day Turkish city of Bo?azkale.

There was also a large library located at the Academy of Gondishapur in western Iran. It was an enormous collection of Persian, Indian, and Chinese texts which might have numbered as high as 400,000.

In fact, the Academy of Gondishapur was so important that I might do an episode on it in the future.

That being said, there weren’t a lot of libraries. The written word was still rare at this time. Everything had to be written or copied by hand. Literacy was relatively rare and limited to only a few people.

Despite how long its civilization was around and many of its great monuments, Egypt wasn’t really a great center of learning. Knowledge and literacy were the realms of a select priestly class who did the job of governing the country on behalf of the pharaoh.

This all changed when Alexander the Great conquered Egypt. Alexander established himself as the new Pharoah. He brought an infusion of Greek culture into the ruling of Egypt and a greater appreciation for knowledge, learning, and philosophy.

After all, Alexander was personally tutored as a child by Aristotle.

Alexander didn’t stick around and left to go conquer more lands, a story which I covered in my episodes about Alexandria and Alexander’s Tomb.

After his death, one of his top generals, Ptolemy, returned to Egypt with his corpse and began the last dynasty in ancient Egypt: the Ptolemic Dynasty.

It was probably during the reign of Ptolemy I that the idea was hatched to create a center of learning in Alexandria.

According to legend, the idea for creating a center of learning came from Demetrius of Phalerum, who, like Alexander, was a student of Aristotle. He was exiled from Athens and came to Alexandria to serve in the court of Ptolemy.

It was established sometime around the late 4th century or early 3rd century BC.

I am using the term “center of learning” instead of “library” for a good reason.  The library was just a part of a much larger institution known as the “Musaeum” or the “Mouseion.”

The Musaeum was named after the Greek Muses, the goddesses of literature, science, and the arts.

The Musaeum is the basis for our word “museum,” but it was really much more akin to a university. It was a community of thinkers and philosophers who studied all aspects of the world. The term philosopher at the time would have also included natural philosophy, which today we call science.

We don’t know how many scholars were part of the musaeum, but the best guess after it opened is that it hosted 30-50 scholars initially and as many as 100 later on.

However, we do know several other things about it. For starters, unlike other collections of scholars, the musaeum wasn’t associated with any particular philosophical school. The musaeum was philosophically agnostic and neutral.

The musaeum was run by a priest which was appointed by the king. All of the scholars who were part of the musaeum didn’t have to pay taxes, had their food and lodging covered, and were paid by the Egyptian state.

There were quite a few noteworthy things that were accomplished at the musaeum. They categorized Egyptian history into the 30 dynasties that we still use today. They translated the Hebrew Bible into Greek into a work known as the Septuagint. They also calculated the circumference of the Earth and also developed the first heliocentric theory of the solar system.

Archimedes may have come up with the idea of his Archimedes screw while studying at Alexandria.

There was also a great deal of translation of other texts, debates, lectures, literary criticism, and scientific experiments. There was also a medical school where students would dissect cadavers. This is noteworthy because it was hardly ever done, and there were major taboos against it up until and even through the Renaissance.

The Musaeum eventually included lecture halls, laboratories, gardens, an observatory, a dining hall, and even a zoo. It really was just like a university campus.

The library was so well known just because of how extensive it was and how aggressive Alexandria was about growing its collection.

The head librarian was not a member of the priesthood. He was a scholar who also had the honor of being the tutor to the son of the king.

The first known head librarian was Zenodotus of Ephesus. His specialty was Greek poems, and he also was known for creating a list of very rare and uncommon words. That list was the first time that we know of in history of someone putting something in alphabetical order.

Zenodotus also started the book collection at the library, and by book, I really mean mostly scrolls. From here on out, I’ll use books and scrolls interchangeably, but it was mostly scrolls.

Zenodotus actually organized the texts by alphabetical order based on the author. However, his alphabetical system only extended to the first letter of the word, not subsequent letters. That seemingly logical next step didn’t happen until the second century.

Each scroll would have a small tag that dangled off the end, which included information about the author, title, and subject.

Callimachus of Cyrene was a later head librarian who subdivided the scrolls into genres and then categorized everything by author underneath that. The categories were rhetoric, law, epics, tragedies, comedies, lyrics, poetry, history, medicine, mathematics, natural science, and miscellaneous.

The storage of scrolls was on shelves, and the shelves were kept half a meter from the walls to allow for airflow to keep the scrolls dry. A big concern was the growth of mold and mildew on damp papyrus.

The early Ptolemic kings were very aggressive about acquiring content for the library. They would purchase scrolls at the two major markets for texts at the time, Athens and Rhodes.

They also, famously, had a policy of searching any ship which entered the Alexandria harbor for books. If there were books on board, they would send them to the library to see if they had them, and if they didn’t, they would copy the book and return the copy to the ship and keep the original.

Alexandria simply had more resources to throw at acquiring their collection than Pergamum did.

One of the myths that most people believe about the Library of Alexandria is that it ended with the fire set by Julius Caesar. This is not true.

So the heyday of the Library was well before the Romans ever got to Alexandria.

In 48 BC, Julius Caesar went to Alexandria to chase down Pompey to finish off the Roman Civil War. The Egyptians killed Pompey as a gift to Caesar, one which angered him, and he stayed holed up in Alexandria in the royal palace.

He was besieged by Ptolemy XIV, the brother of Cleopatra. Caesar set fire to ships in the harbor to keep Ptolemy at bay which inadvertently spread to the city and then to the library.

There are no accounts indicating that the library was burned on purpose, and it is highly doubtful that would have been the case as there was no strategic reason to do so.

It also isn’t known how much of the library burned. One problem is that we really have no idea where the physical library was actually located.

Some people say that the fire totally destroyed the library. However, Roman historians like Cassius Dio seem to indicate that it was only partially damaged. Another theory is that the main library wasn’t actually burned at all, but rather it was just a storage facility near the harbor which the library used.

Just 15 years later, in 33 BC, Mark Antony seized all 200,000 scrolls in the Library of Pergamum and gave them as a gift to Cleopatra.

This has been interpreted in different ways by different historians. On the one hand, the library must still have existed if such a large gift had been made. On the other hand, it might have been given to replenish the works lost in Caesar’s fire.

Over the next three hundred years of Roman Imperial rule, we know that the library and the musaeum still existed, but we don’t know that much about it. We know Emperor Claudius expanded the musaeum as he himself was a historian.

Under Roman rule, it seems that the library suffered a long decay. The Romans weren’t scholars like the Greeks were. It never reached the same heights it did under the early Ptolemaic rulers.

We do know that another branch of the Library opened in the city at the Temple of Serapis. We know this only because Emperor Theodosius I ordered the closure of all pagan temples, and the library at the Temple Serapis was one of them.

What we do know is that one of the last major scholars to teach at the Serapis was a woman by the name of Hypatia of Alexandria. Hypatia was by all accounts popular and well respected in the city, but she was eventually killed during a Christian riot in the year 415.

It is entirely possible that most or all of the pagan works were destroyed by Christians. We don’t know.

The last we really hear about anything was when the Caliph Omar conquered Alexandria in 642.

Omar ordered the destruction of all the books in the city. He is reported to have said, “If those books are in agreement with the Quran, we have no need of them; and if these are opposed to the Quran, destroy them.”

Oddly enough, something almost every caliph immediately after Omar wouldn’t have done.

There was a movement to create a new Library of Alexandria in the 20th Century, and this project came to fruition in 2002 with the opening of the Bibelotechia Alexandria.

I actually visited the new library back in 2009. It is a very modern building which has a very prominent place near the Alexandria coast. It is basically the equivalent of a nice, relatively new college library.

While the fire of Julius Caesar did capture much of the attention in history, the truth is that the library was on the decline before the fire ever occurred, and subsequent rulers of Alexandria over the centuries finished off whatever the fire didn’t due to a lack of concern with learning and knowledge.

Nonetheless, for at least several centuries, the Library of Alexandria was unquestionably the greatest repository of knowledge in the ancient world.

Today’s review comes from listener Paul Stephen over on Facebook he writes.

Thanks, Gary for your dedication to your fantastic podcast.

You seem to pack just the right amount of information and knowledge into each and every episode.

Thank you, Paul. It is a lot of work every day, but I enjoy doing it, and the more people who listen, the more it makes the work worthwhile.