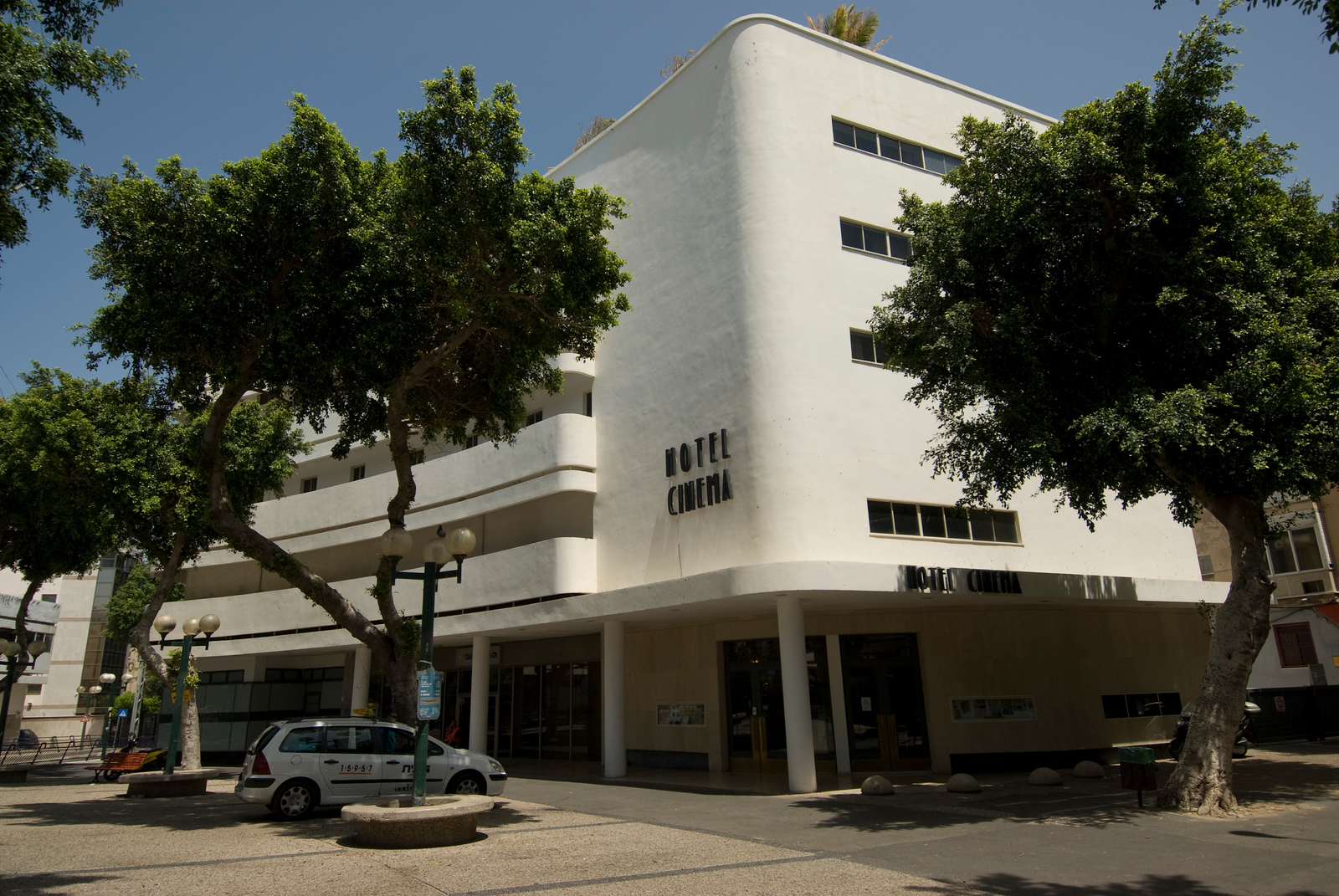 From the World Heritage inscription for the White City of Tel-Aviv:

The city of Tel Aviv was founded in 1909 to the immediate north of the walled port city of Jaffa, on the hills along the eastern coast of the Mediterranean Sea. During the era of British rule in Palestine (1917-1948), it developed into a thriving urban center, becoming Israel’s foremost economic and metropolitan nucleus.

The White City of Tel Aviv can be seen as an outstanding example in a large scale of the innovative town-planning ideas of the first part of the 20th century. The architecture is a synthetic representation of some of the most significant trends of Modern Movement in architecture, as it developed in Europe. The White City is also an outstanding example of the implementation of these trends taking into account local cultural traditions and climatic conditions.

Tel Aviv was founded in 1909 and developed rapidly under the British Mandate in Palestine. The area of the White City forms its central part and is based on the urban master plan by Sir Patrick Geddes (1925-27), one of the foremost theorists in the early modern period. Tel Aviv is his only large-scale urban realization, not a ‘garden city’, but an urban entity of physical, economic, social and human needs based on an environmental approach. He developed such innovative notions as ‘conurbation’ and ‘environment’ and was a pioneer in his insight into the nature of the city as an organism constantly changing in time and space, as a homogeneous urban and rural evolving landscape. His scientific principles in town planning, based on a new vision of a ‘site’ and ‘region’, influenced urban planning in the 20th century internationally. These are issues that are reflected in his master plan of Tel Aviv.

I try to take at least one representative photo of each World Heritage site I visit. I had a difficult time even knowing what I should be taking a photo of for the White City of Tel-Aviv. It is by far the most ambitious World Heritage site I’ve visited. There is nothing that jumps out at you. There is no one single building or even collection of buildings that says “this is what we are talking about”. I searched online and the one building people mentioned as an example of modern architecture in Tel Aviv was the Cinema Hotel which wasn’t too far from where I was staying.

The White City of Tel Aviv now holds the position of the latest World Heritage site I have ever visited.

Tel Aviv is an Israeli city in the eastern coast of the Mediterranean Sea. The city was founded in the early 20th century and quickly became a bustling metropolitan city during the time of British Mandate in the Palestine region. Today, the White City of Tel Aviv – The Modernist Movement is a collection of properties recognized by UNESCO as an important cultural site. It was recognized as a UNESCO World Heritage Site in 2003.

The White City of Tel Aviv – the Modernist Movement is the term used to describe multiple properties within the city. These properties exhibit the architectural trends and planning that coincide with the modern movement in the city.

About the White City of Tel Aviv

The original plan for what is now the White City of Tel Aviv was supposed to be a ‘garden city’ with an urban character. The idea was to establish a free-standing building on its own lot surrounded by a garden. The Central White City is located at the highest point of Israel. Meanwhile, there are several other notable buildings that are part of this Modernist Movement that includes the Habima Theatre, Mann Auditorium, and the Circus of Zina Dizengoff, among others.

The White City of Tel Aviv – the Modernist Movement is divided into three separate zones. The central zone is where the White City is located. In this city, you will find buildings and structures that were inspired by the works of Le Corbusier, Erich Mendelssohn, and Bauhaus. The different zones were established at different time periods, which also reflect the movement within the architectural landscape during that time. Both Zone A and Zone B were established in the early 1930s, Zone C was established in the 1920s. Zone C represents the Bialik District and this is where you will find a lot of eclecticism and Art Deco architectural styles.

About the Modernist Movement

The White City of Tel Aviv – the Modernist Movement earned the nod from UNESCO due to its implementation of modernist ideas into the architectural landscape of the city. At the same time, the various traditional and climatic conditions of the land were also taken into account in creating these architectural designs. This approach to architecture provided more relevance to the culture of Israel and the city of Tel Aviv.

The architects that worked on the design of the buildings tried to adapt to the unique conditions of the desert and the Mediterranean region. The use of white and light colors helped to reflect the heat off of the building. In addition, the use of glass walls was a principle of Bauhaus architecture that was evident in many buildings in Europe, was replaced with small and recessed windows. Rather than letting the light in with the large glass walls, the new design limited the amount of heat and glare that enters into the building.

Since then, this new approach to architecture and construction methods was adopted throughout the city. Concrete was the number one choice of material used for construction. In 1912 forward, reinforced concrete was the most commonly used material in construction. Over time, it helped to define the character of the city of Tel Aviv. But it is more than the architectural design and look of the city that shaped its character, but also the town planning.

Now that the city of Tel Aviv and its modernist architectural features have been listed as a cultural site by UNESCO, there are now efforts being done to preserve them. Many of these so-called architectural classics have been left to ruin and some were even demolished. Some of these buildings were refurbished in order to aid in the restoration process. About 1,000 Bauhaus structures were protected as part of legislation passed in Tel Aviv in 2009.