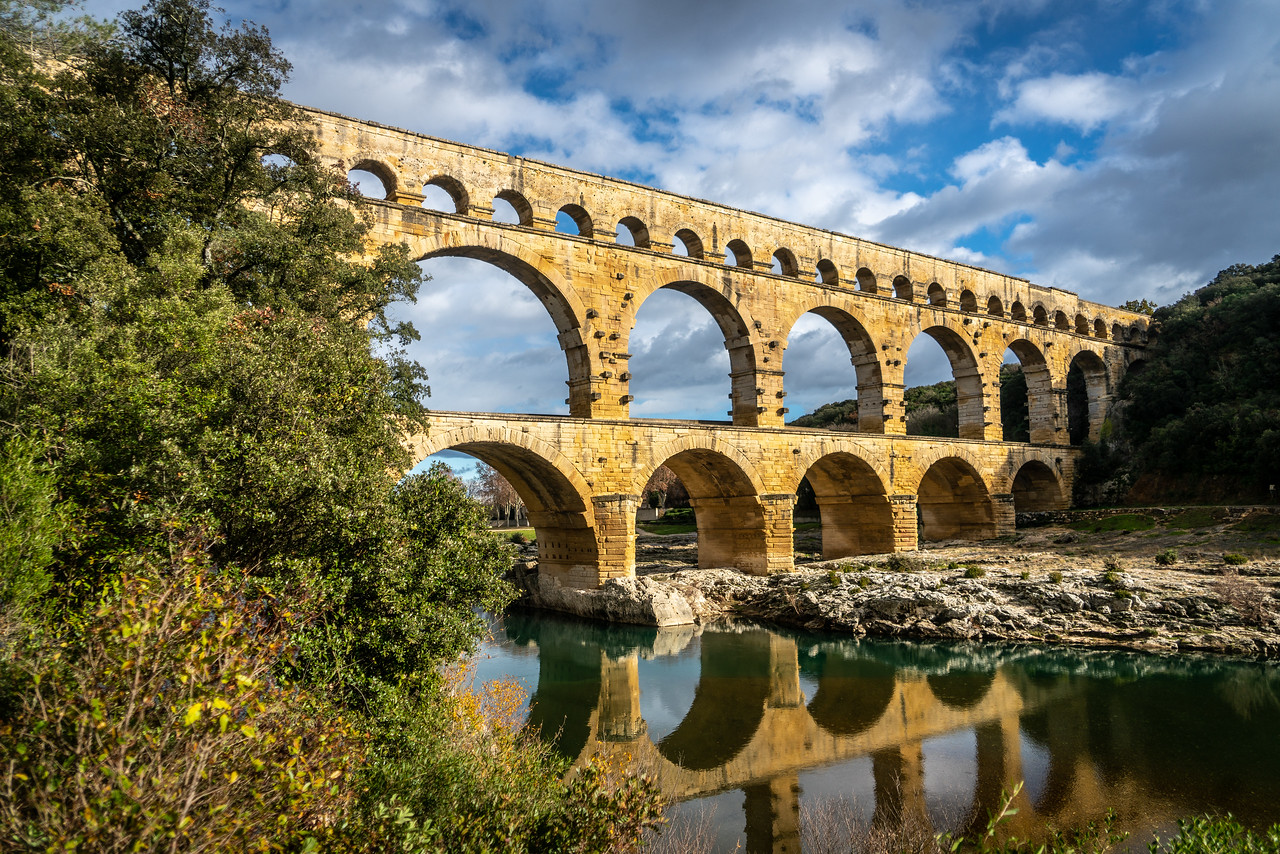 The Pont-du-Gard is the remains of a Roman aqueduct that delivered water over 30km to the Roman colony of Nemausus, what is today called the modern city of Nimes. It also holds the distinction of being the highest surviving Roman aqueduct in the world.

The aqueduct was used as a bridge across the river for centuries. Part of the columns supporting the upper parts of the aqueduct was carved out to allow for cattle, carts, and foot traffic to cross more easily.

In the 18th century, a bridge was built alongside to aqueduct to better facilitate traffic crossing the river. The bridge is still in place, and the damage done to the aqueduct when used as a bridge was repaired.

Over the 30km course of the entire aqueduct, the water only drops 12.6 m, and the difference in height between one end of the bridge and the other is only  2.5 cm.

The fact that the bridge is still standing is a testament to the talent of the Roman engineers that built it. The river Gard is subject to periodic flooding. There is a video in the museum which shows how high the water can get during its flooding, rising almost to the base of the bridge, totally covering the first arches.

The fact that it is able to withstand the force of such flooding, and that it has done this repeatedly over 2,000 years, in amazing.

The obvious draw is the main span that crosses the Gard river. This is what the site is best known for, and this the photo which everyone comes to take.

However, there is more to the site than just the span which crosses the river. On the north/left bank, make sure to take the path to the very top of the aqueduct. This is interesting in itself as it is the entrance to the actual water channel. It is currently locked off, but it used to be open to the public in the 19th century.

If you then take the path away from the river you will start to see dilapidated sections of the aqueduct (see photo above).

One thing to look out for what appears to be large stones that are resting against the aqueduct. You might wonder what they are doing there and why such a large stone would be placed there? They are not in fact stones. They are the remnants of wooden structures that were encased in calcium over time. Over the centuries the calcium kept accreting until today it looks like a giant stone that is resting against the aqueduct.

The museum is located on the left/north bank visitors center. It provides a great overview of the history of the site, a glimpse into ancient Roman life, as well as explaining how the aqueduct was built, and why it was necessary.

Entrance to the museum is included with the entrance fee to the site.

Memories of the Garrigue

This is an open-air exhibit on the grounds which will show how agriculture was developed in the Mediterranean region. You can see orchards and grazing animals that were used in Roman-era agriculture. This trail is also one of the best ways to see the ruins of the aqueduct which do not cross the river.

There are a few things to keep in mind when shooting the main bridge section of the aqueduct.

First, be aware of where the sun is. Depending on the time of day and year of your visit, one side of the bridge will be illuminated by the sun, and one will be in shadows.

Make sure to walk down as far as you can to the river to get a low angle shot of the aqueduct. Depending on the time of year and water flow, the water level might be high or low.

Likewise, don’t forget to climb the banks on either side of the river to higher angle shots as well.

The aqueduct isn’t just the main bridge section, although that is the most well-known part of the site. The aqueduct extends into the woods on either side of the river, albeit in a more ruined state. Take the time to walk inland a bit, away from the river, to see more of the ruined aqueduct.

There are many places to eat in neighboring communities. There are, however, a few on-site dining options.

Les Terrasses is situated on the river with a clear view of the Pont-du-Gard and outdoor seating. It is located in an inn which was opened in 1865.

There is also “Snack” which is located on the north/left bank of the river and is open year-round.

Le Bistrot is located on the south/right bank of the river and is open seasonally in the summer.

The facility opens at 9 am every day, and closing time will vary throughout the year. The site closes as early as 8 pm in January-March, and as late as midnight in July-August.

Most people visiting will probably be coming from one of the larger cities nearby, including Nimes, Arles, or Marseille.

If you are getting a guided tour, make sure to specify which side of the river you are meeting at. It can take 10-15 minutes to drive from one side to the other. You can also just walk across regardless of which side you arrived.

Drive time from Marseille, Nimes, Avignon, or Montpellier is all under one hour.

You can easily get directions by using Google Maps. However, be aware that there are two parking lots and two entrances on either side of the river, although you can walk from one side to the other.

The closest train station is the Nîmes Pont-du-Gard station, which is actually located about 25km from the site. The station has only recently opened in 2019, and there may be not regular bus services from there to Pont-du-Gard.

The train station in Avignon, slightly farther away, does have a local bus that will take you to a roundabout just outside the entrance on the left bank on the river.

Please check the times for departures for when you will be visiting.

The cost for adults is €9.50. Children under 18 are admitted for free.

You can purchase tickets in advance at the official Pont-du-Gard website.

The weather in the area is mild year-round. Even in winter it seldom snows and temperatures can range around 5-15C (40-60F).