I visited Namibia for the first time in November 2013. What I experienced was far beyond my expectations. I found it to be a land of contradictions. It is a place where you can experience daily fog in the desert. Where you may have to wear a coat in the tropics. It has some of the oldest land and human artifacts on Earth, yet it is one of the youngest countries in the world.

It is also a spectacular place for photography. You could almost throw your camera in the air and be guaranteed a great photo.

This collection is the result of a five day trip I took into the Namib Desert and a shorter two day trip to Damaraland to visit the ancient rock carvings of Twyfelfontein. Both are UNESCO World Heritage Sites. 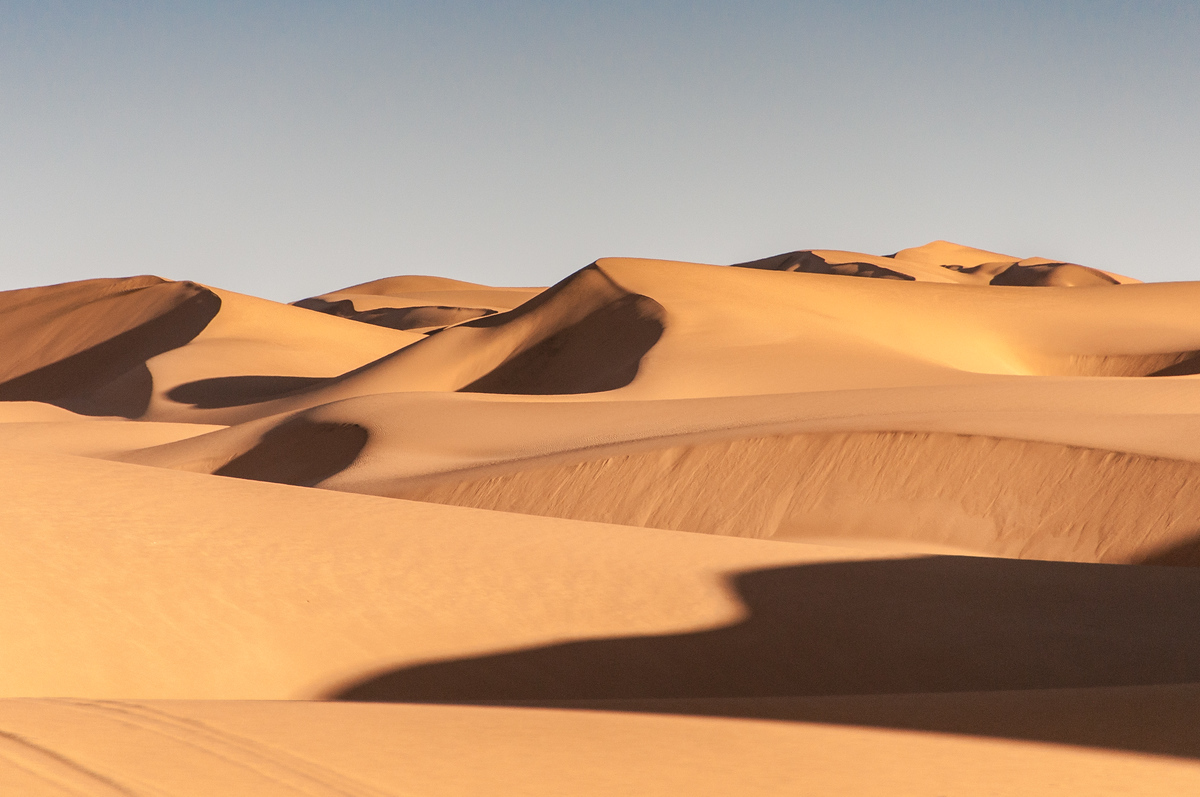 1 Without question, the most defining thing about Namibia are the dunes of the Namib desert. Recently declared a UNESCO World Heritage Site, the Namib is unique among the deserts of Earth for the size and scope of its dunes.

2 To the north, the Namib ends abruptly at the Kuiseb River. Dry most of the year, the river bottom holds enough mositure to support trees and plants all year round. The dunes only extend as far as the river. To the north, it is bare rock. 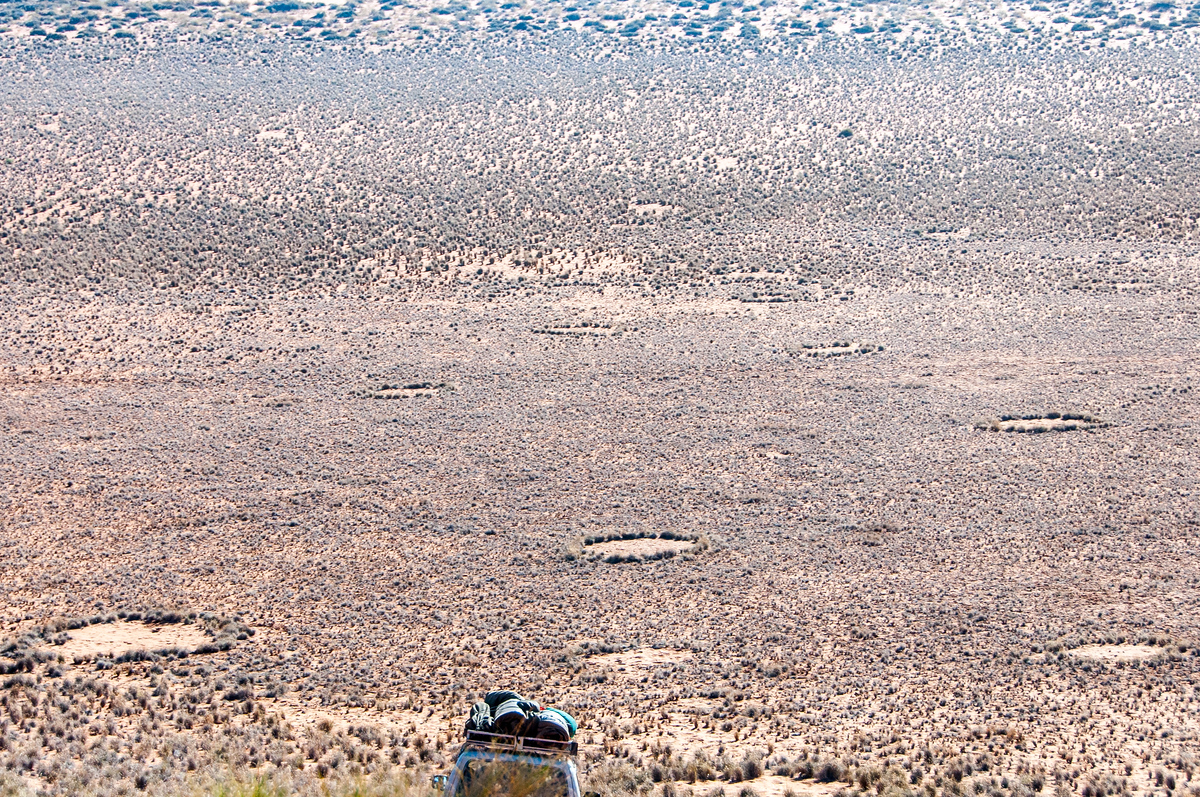 3 Throughout parts of the desert you will find rings known as ‘fairy circles’. For decades, no one knew how or why fairy circles formed. The answer was found to be termite colonies below the surface which take up moisture and prevent plant life from appearing inside the circle. 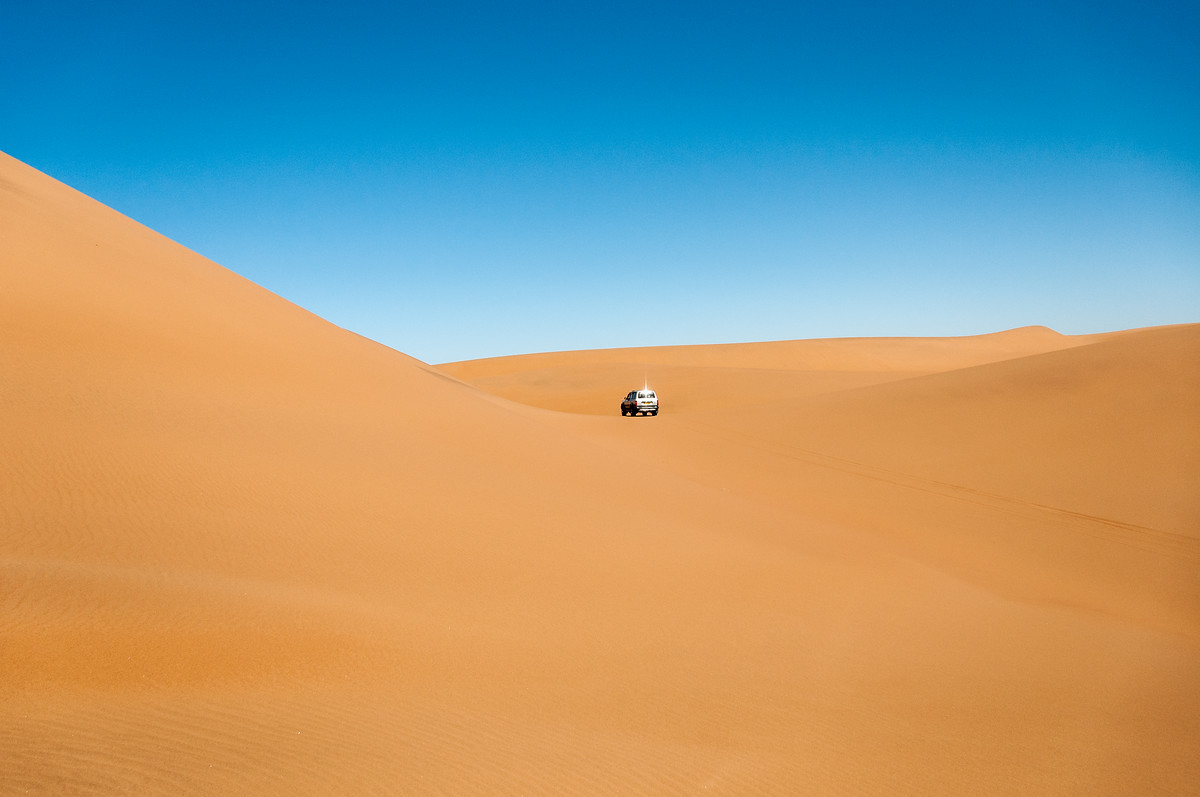 4 The only real way to navigate the dunes of the Namib is by 4×4 truck. In a land with no vegetation, the appearance of a vehicle stands out in contrast to the desolate surroundings. 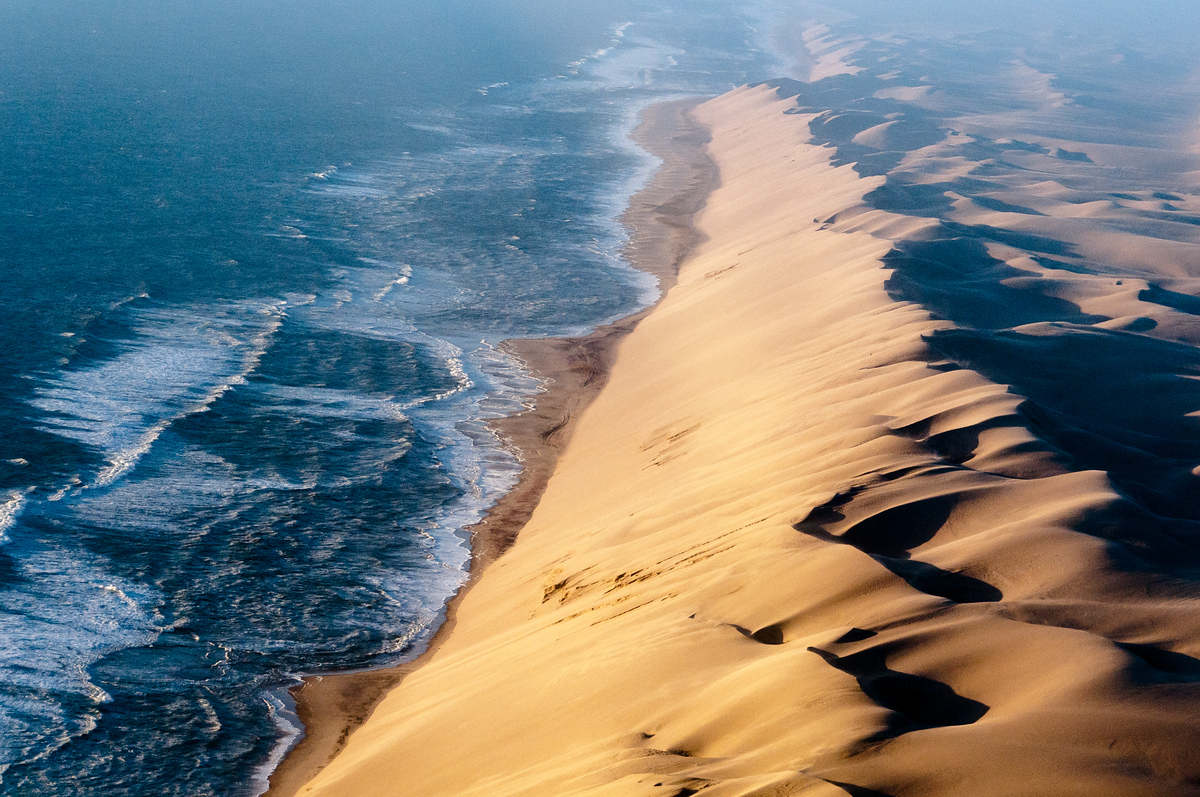 5 The “Long Wall”, sometimes called “the Wall of Death”, is a 100m high stretch of sand dune which runs parallel to the Atlantic coast. You can drive along the beach at the base of the wall during low tide. At high tide, all vehicles would be submerged.

6 We got to the coast by driving straight down the Long Wall! As it was later explained to me, regardless the size of the dune, they all basically have the same slope. Other than the perception of looking down, there is little technical difference in driving down dunes of different sizes. 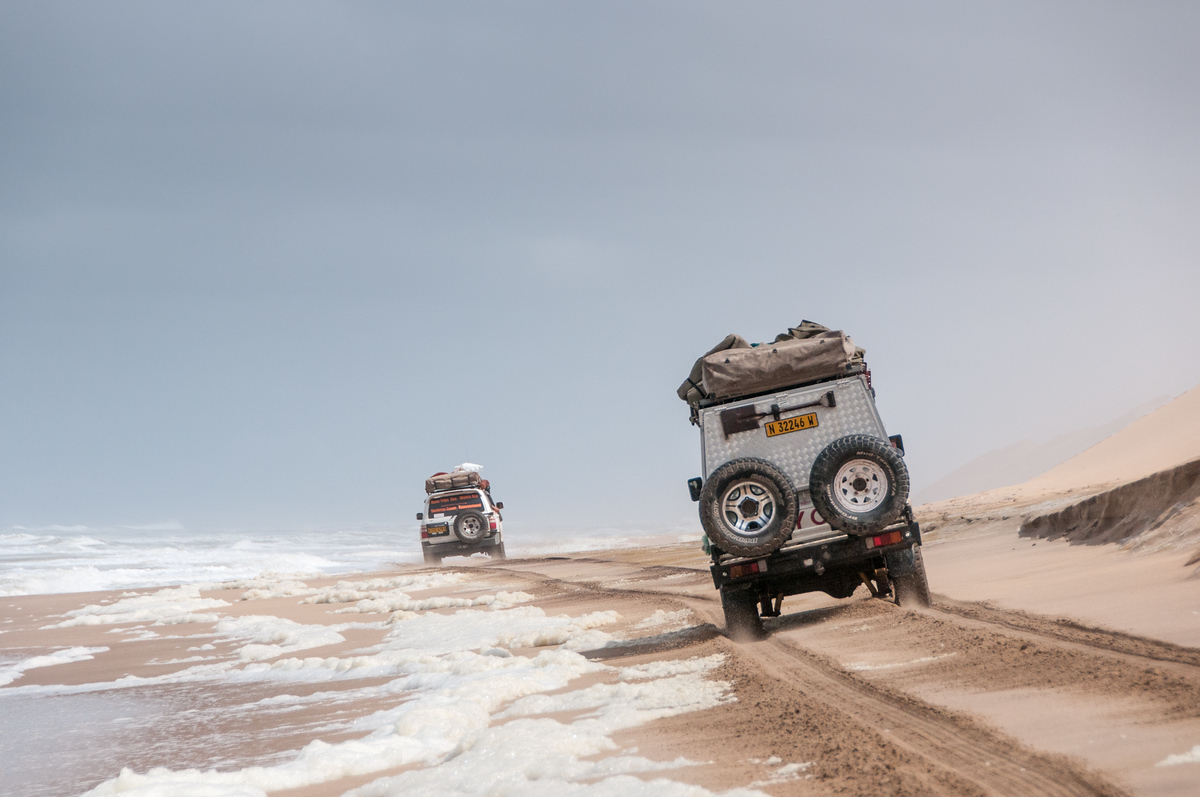 7 Driving along the Skeleton Coast is a completely different experience than driving along the dunes of the Namib. The foam which is seen up and down the coast is a result of the nutrient rich waters which flow up the coast from Antarctica. 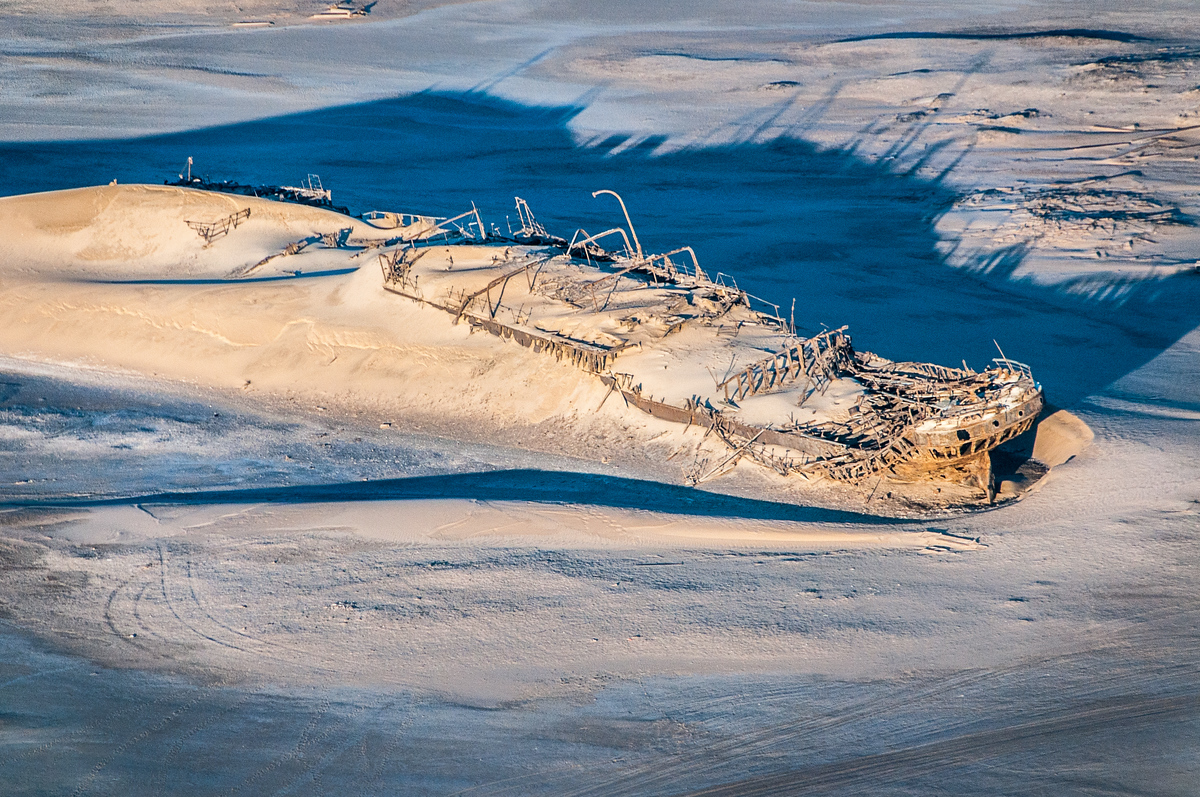 8 The Skeleton Coast of Namibia has been a graveyard for ships for centuries. On September 5, 1909 the S.S. Eduard Bohlen ran aground in a thick fog on the Skeleton Coast. In the 100 years since, the desert has slowly encroached upon the sea. Today the Eduard Bohlen is full 400m from the coast, oddly surrounded by sand dunes.

9 I found the Damara people to be very positive and cheerful. This photo of a young Damara man perfectly captures that spirit. 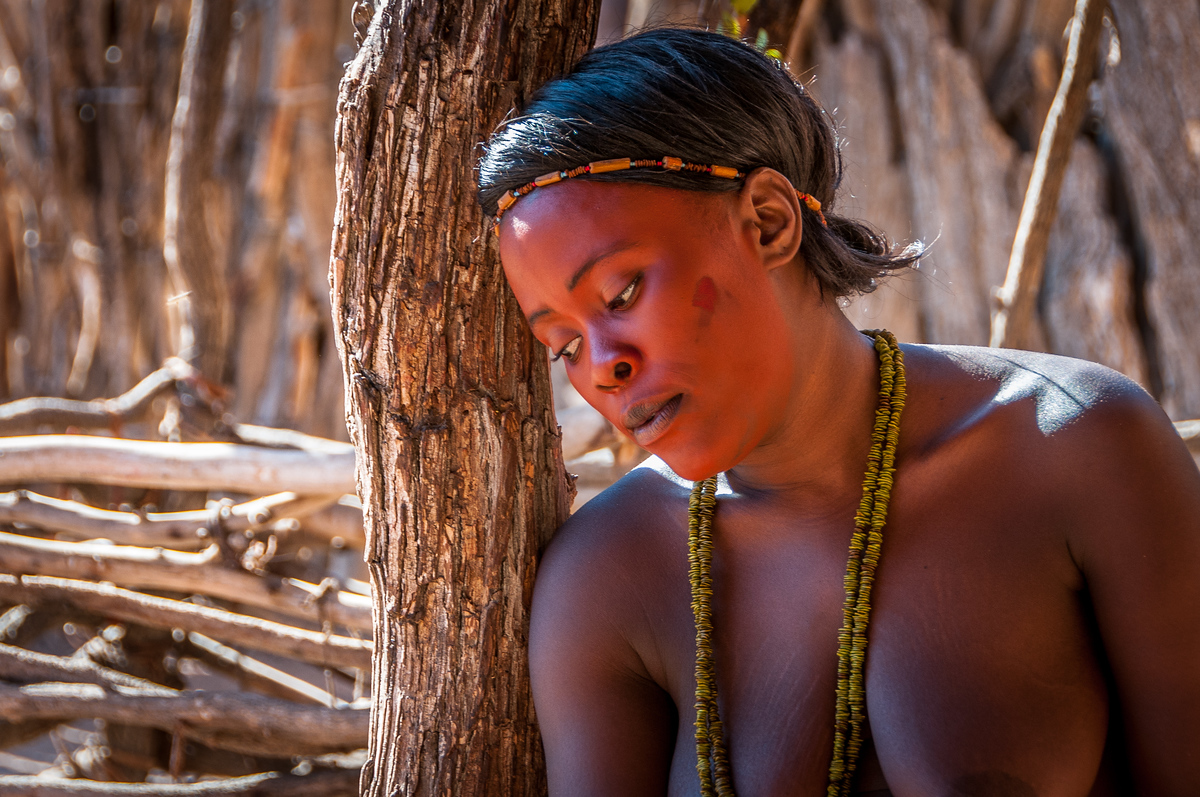 10 Unlike the women on the Himba tribe in Namibia, who use heavily use ocher on their bodies and hair, Damara women use ocher and makeup much more sparingly. 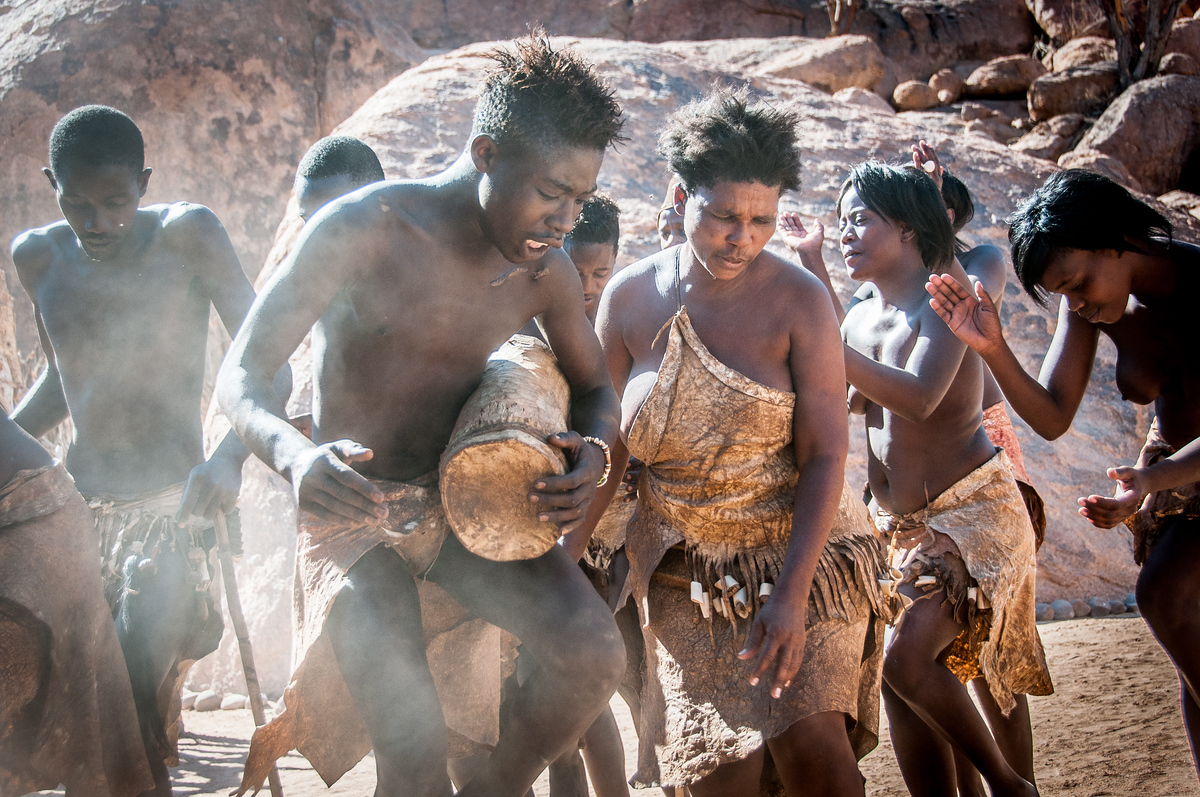 11 The Damara people are also enthusiastic dancers. Their movement and music was impressive. 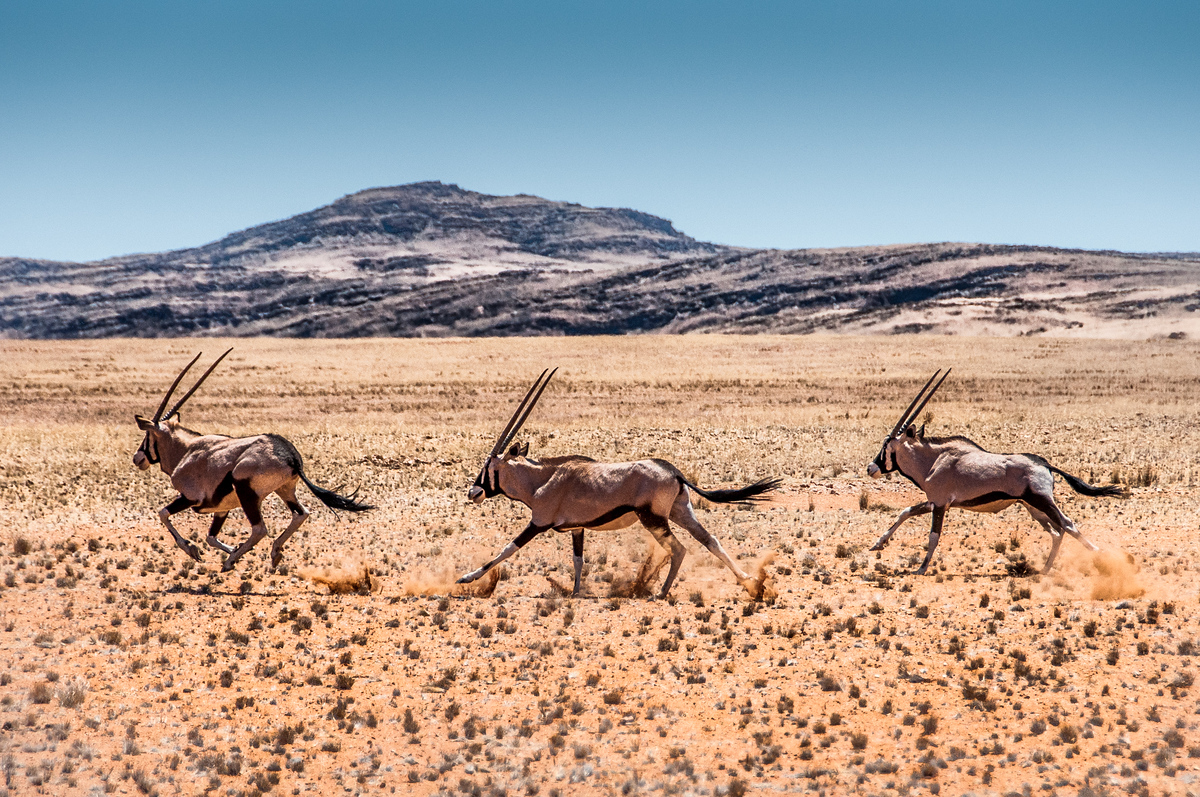 12 Even in the desert, you can find wildlife in Namibia. This small herd of oryx was running along side our vehicle. I took this shot from the open window of our car after the heard crossed our path. 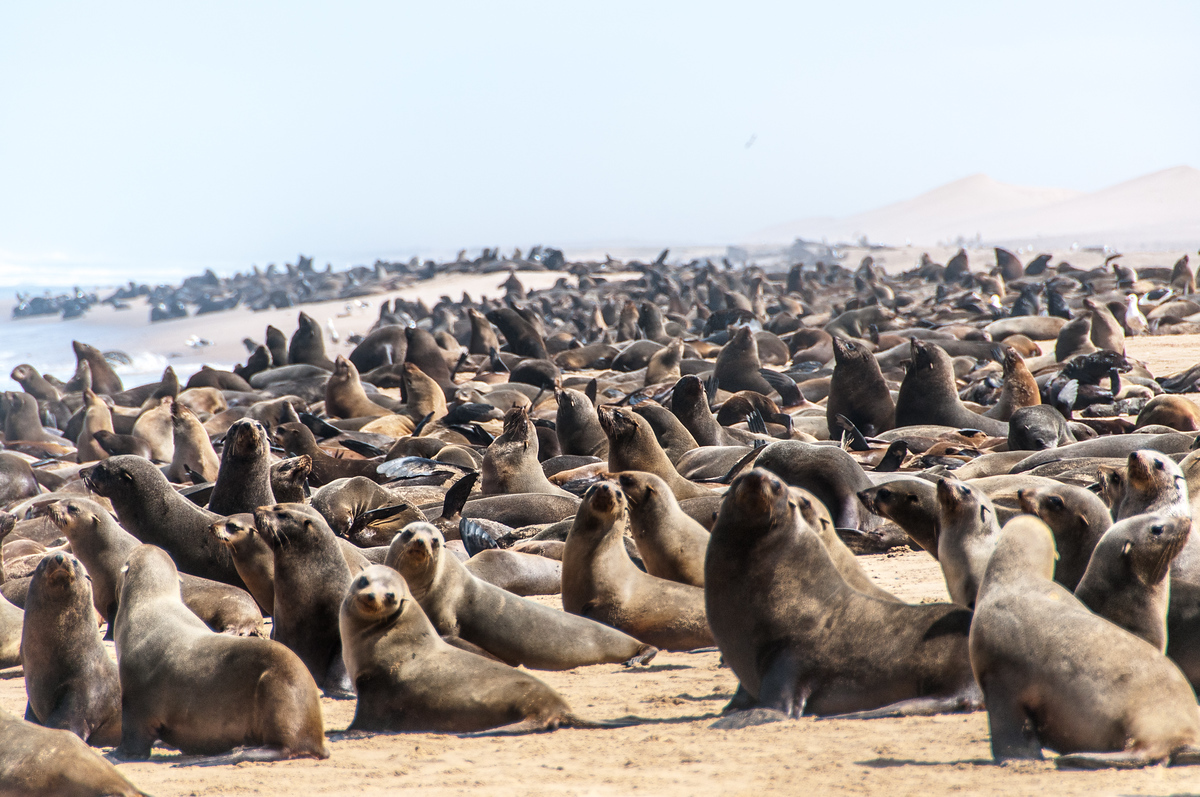 13 The nutrient rich waters result in an incredible number of seals along the coast.

14 The rich waters also attrack birds. Here is a squadron of pelicans in Sandwich Harbor, south of Walvis Bay.

15 Flamingos are a truly global species which can be found on five different continents. This is the third continent I’ve had the pleasures of witnessing flamingos in the wild.

16 The Sociable Weaver is a tiny bird that creates some of the largest nests in the world. 100’s of birds live inside the collective nests which often look like a haystack in a tree. Not only are the nests large, but they have been known to last as long as 100 years. 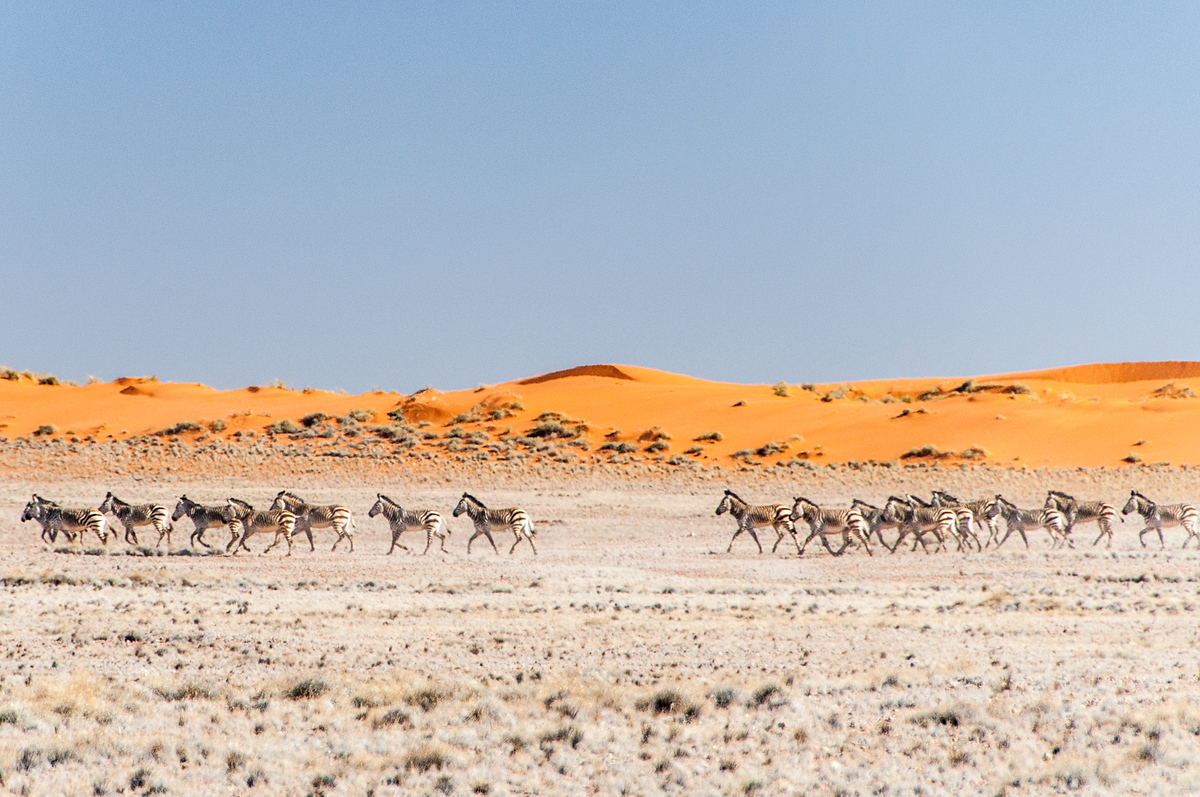 17 Zebras can also be found along the edges of the Namib desert. 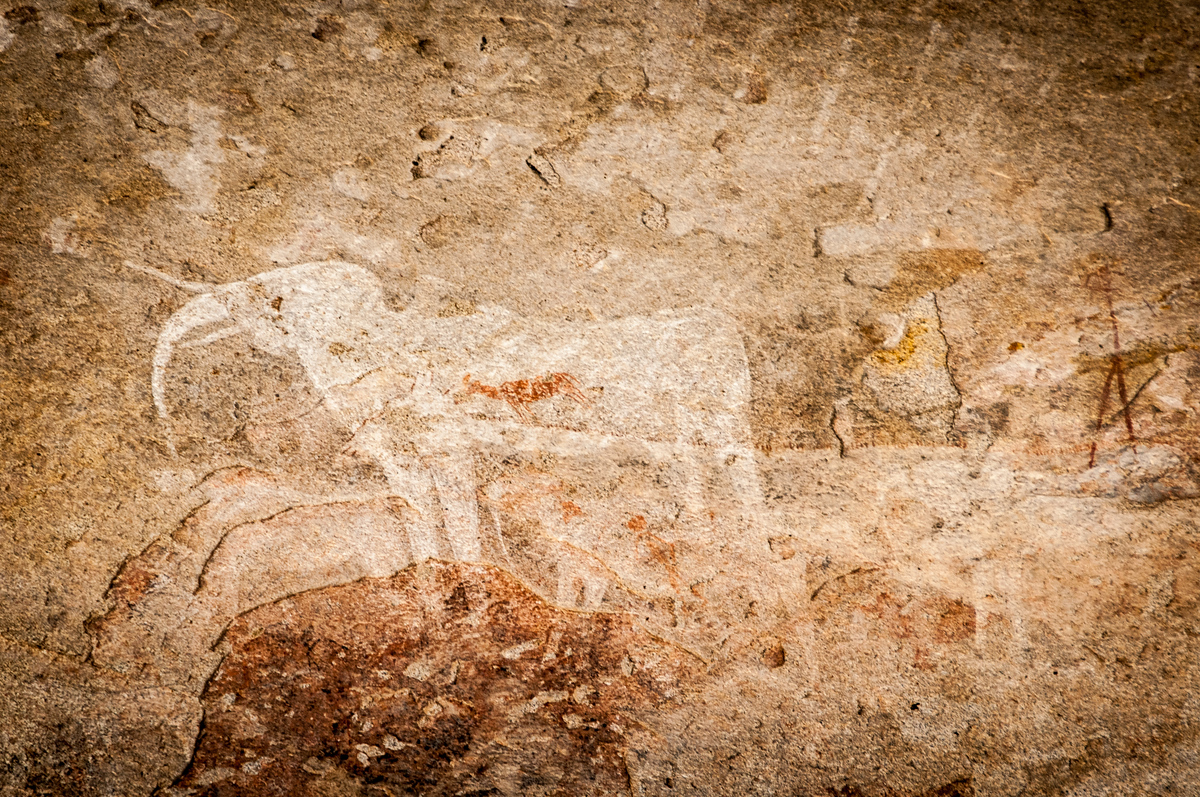 18 Located on the Philips Cave Ranch, the White Elephant is one of the most famous Bushman paintings in Namibia. Tools found in the cave has been dated to 3,500 BC. 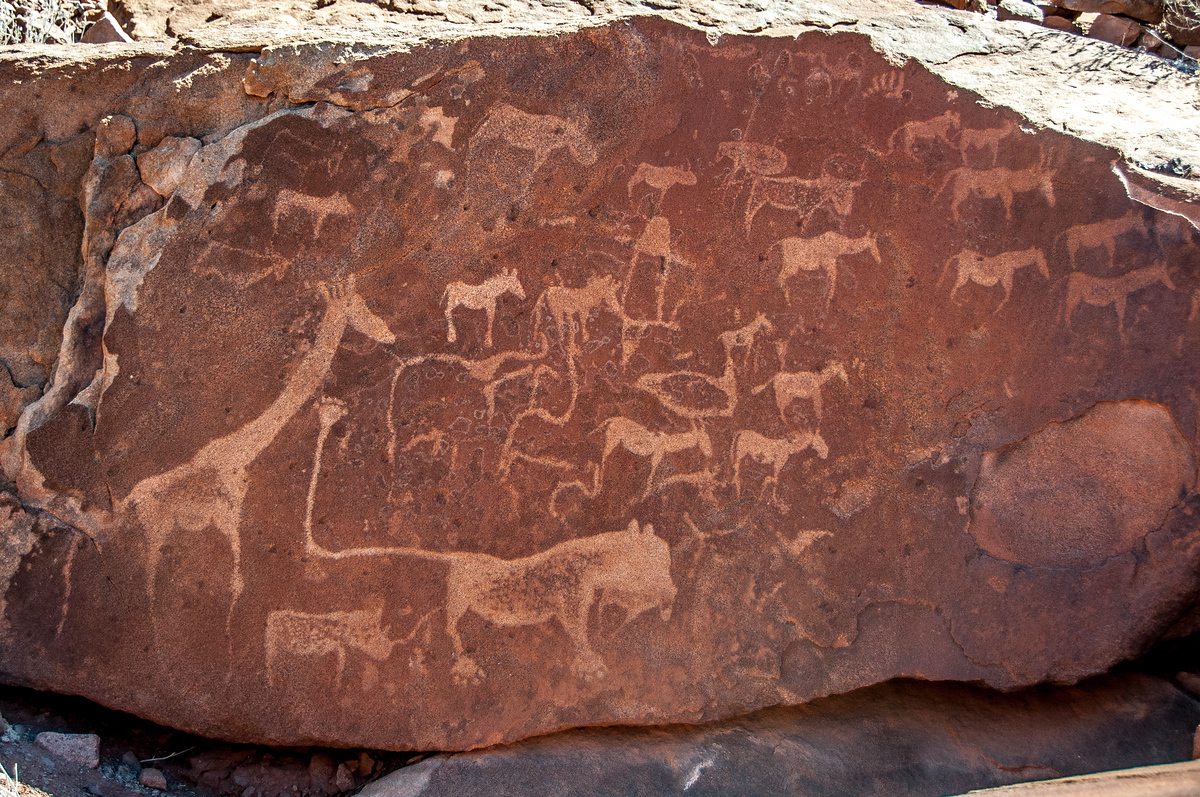 19 The 2,500 rock engravings at Twyfelfontain date back 6,000 years and are some of the oldest examples of rock art in all of Africa. It was declared a UNESCO World Heritage Site in 2007, the first ever in Namibia.

20 This tree was the only tree visible at our campsite above the Kusib river. At sunset it provided a stark contrast to the desolation of the Namib Desert.

24 thoughts on “Visions of Namibia”