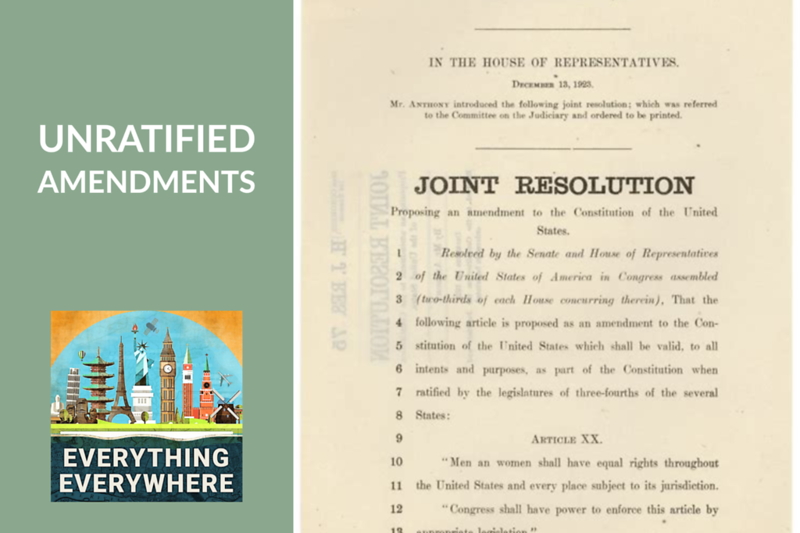 The United States Constitution spells out a very specific process for how to amend the document.

First, Congress must vote to approve the amendment. Then the amendment is sent to the state legislatures for ratification.

Learn more about unratified amendments, and how some of them have become immortal, on this episode of Everything Everywhere Daily.

I’ve told you many times before about CuriosityStream and how they have some of the best educational programming and documentaries of any streaming service.

I’ve also told you how affordable it is as it normally costs only $20 per year to subscribe to the service.

Well, it just got even cheaper. Curiosity Stream is celebrating their 6th anniversary. Now through April 21st, annual plans have been discounted by 40%!

That means a full year of high definition programming can now be had for only $11.99!! That’s one dollar a month!

To take advantage of this limited-time offer, go to Everything-Everywhere.com/CuriosityStream.

Or just click on the link in the show notes.

As I noted in the introduction, the constitution has a very set procedure for how to amend it..

It is actually really hard to do, and that is by design.

To date, the constitution has been amended 27 times. 10 of those were done in one fell swoop with the passage of the Bill of Rights.

To put that into perspective, it has been estimated that about 11,000 amendments have been proposed to congress since the constitution was established in 1788.

Two-thirds of both houses of Congress must approve the amendment, and then three-quarters of the state legislatures must approve it. That is a pretty high hurdle to overcome. It is designed to ensure that if the constitution is changed, then almost everyone will be in agreement on the need for a change.

But what happens when an amendment jumps over the first hurdle of congress but doesn’t make it over the second hurdle of approval by the states?

Then you have what’s known as an unratified amendment.

For most of the amendments which have passed Congress, there was no stipulation as to when the states had to approve the amendment. This has lead to some very odd situations where states ratified constitutional amendments decades or even centuries after they were first approved by congress.

The classic example of this is the 27th amendment. This is the most recent amendment to the constitution.

The text of the amendment is as follows:

No law, varying the compensation for the services of the Senators and Representatives, shall take effect, until an election of Representatives shall have intervened.

Basically, a sitting congress cannot give itself a pay raise. They can only give the next congress, which sits after the next election a pay raise.

This amendment was passed by Congress on September 25, 1789, as part of a package of 12 amendments, 10 of which became the Bill of Rights.

At the time of passage by Congress, there were only 13 states, so they needed 10 to approve the amendment. By 1792, only 7 states had passed it, and the 7th was Kentucky which was the 15th state. As more states were added, the number of states required to pass it kept growing.

After this, it picked up momentum and the National Archivist declared the amendment to have been passed on May 18, 1992, when Michigan ratified the amendment.

It took 202 years, 7 months, and 10 days for the amendment to get ratified, from the passage in Congress to the final state.

I mentioned that this was one of the 12 original amendments. The 27th amendment and the Bill of Rights make 11. What happened to the 12th?

It is called the Congressional Apportionment Amendment. The text of it reads as follows:

So, if this amendment were to have been passed, then the house of representatives today would have about 6,600 members instead of 435.

Believe it or not, this almost passed. It was one state away from ratification when Kentucky ratified it in 1792. They were the 11th state to ratify, but they needed 12 at the time.

No state has ratified it since 1792, but it is still theoretically possible that states could ratify it. Although, realistically, given the population of the country today, this would be a bad idea, and the house can set its own size.

In 1810, congress passed the Titles of Nobility Amendment and sent it to the states. The text of this amendment reads:

If any citizen of the United States shall accept, claim, receive or retain, any title of nobility or honour, or shall, without the consent of Congress, accept and retain any present, pension, office or emolument of any kind whatever, from any emperor, king, prince or foreign power, such person shall cease to be a citizen of the United States, and shall be incapable of holding any office of trust or profit under them, or either of them.

This amendment was created in direct response to Napoleon’s younger brother who’s first wife was American. They wanted their son, Jerome Napoleon Bonaparte, to have French aristocratic titles, but still be an American citizen.

This has been ratified by 12 states so far, none since 1812. I don’t think most people care about this at the moment, but if at some point in the future, some American gets some title from a foreign country, this could make a revival. Currently, 26 more states would have to ratify it for passage.

The other 19th-century unratified amendment is a doozy. It is called the Corwin Amendment. It reads:

No amendment shall be made to the Constitution which will authorize or give to Congress the power to abolish or interfere, within any State, with the domestic institutions thereof, including that of persons held to labor or service by the laws of said State.

Of course “domestic institutions” was a reference to slavery.

The amendment was passed by Congress on March 2, 1861, just a month before the civil war started. It was a last-minute attempt to prevent war.

Had this been passed, it would have blocked passage of the 13th and 14th amendments. This would have had to have been overturned to get those amendments passed.

The Corwin Amendment is a good reason why we shouldn’t have open-ended amendments. This vestige of slavery is technically still floating around. While the odds of it ever being ratified are zero, it is still sort of annoying that it’s still there.

Congress eventually wised up to this problem.

Starting in 1917, with the 18th Amendment which ushered in prohibition, congress put a timer on amendment ratification. The third section of the amendment said:

This article shall be inoperative unless it shall have been ratified as an amendment to the Constitution by the legislatures of the several States, as provided in the Constitution, within seven years from the date of the submission hereof to the States by the Congress.

This solved the problem of having things like the Corwin Amendment floating around forever. States had seven years to ratify the amendment, and if they didn’t, then the amendment would die.

However, they didn’t do this with every amendment. There was one more amendment that passed congress without a timer. The Child Labor Amendment, which gave congress the power to regulate or ban labor by people under the age of 18.

In 1939 there was a Supreme Court case, Coleman v. Miller, that dealt with the amendment. The court flat out said that if Congress didn’t specify a time in which the amendment had to be ratified, then it would remain an open issue. The fact that they did such a thing for past amendments, aka the 18th amendment, indicated that they knew it was an option and could have done that if they had chosen to do so.

The Child Labor Amendment has become sort of moot because the federal government just went ahead and started to regulate it anyhow during the New Deal.

There have been two amendments that were passed by congress with deadlines for ratification, which weren’t ratified in time by the states. The Equal Rights Amendment and the District of Columbia Voting Rights Amendment.

The other amendment, the District of Columbia Voting Rights Amendment, would give Washington DC the same representation in Congress and rights as if it were a state. It would also have repealed the 23rd amendment, which would have become unnecessary.

The deadline for this amendment was August 22, 1985, and by that time only 16 states had ratified it.

That means there are still four amendments floating around which could in theory still be ratified. The Congressional apportionment amendment, the Titles of Nobility Amendment, the Corwin Amendment, and the Child Labor Amendment.

While none of the amendments have any real chance of ever being ratified, it also isn’t above zero.

If there are any members of Congress out there listening, it might be worthwhile to propose the Amendment Cleanup bill, which would formally rescind congressional approval for the outstanding amendments which are now over a century old.