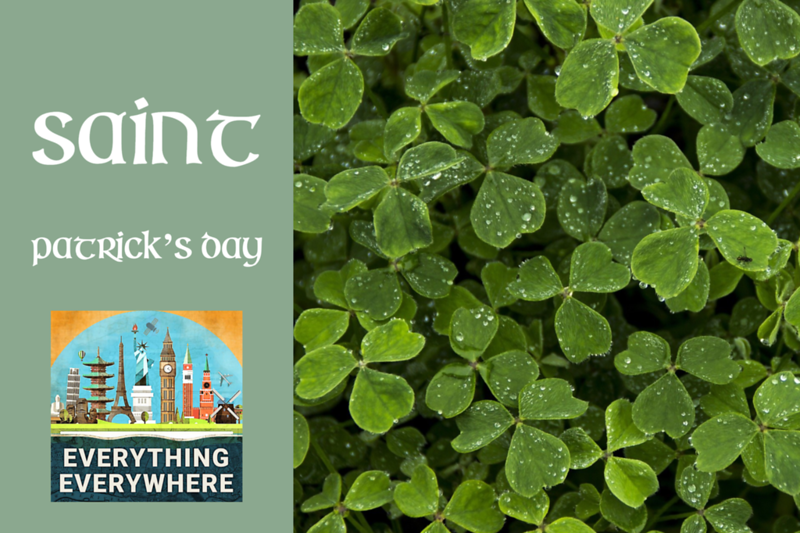 Every March 17th, St. Patrick’s Day is celebrated. Everyone wears a lot of green, there are parades, shamrocks, and a whole lot of drinking.

But who exactly was St. Patrick? Why do we celebrate his day? And what does any of this have to do with shamrocks, drinking, and wearing green?

Learn more about St. Patrick’s Day and why we celebrate it on this episode of Everything Everywhere Daily.

My audiobook recommendation today is St. Patrick of Ireland: A Biography by Philip Freeman.

Ireland’s patron saint has long been shrouded in legend: he drove the snakes out of Ireland; he triumphed over Druids and their supernatural powers; he used a shamrock to explain the Christian mystery of the Trinity. But his true story is more fascinating than the myths.

The Patrick who emerges from this book is even more extraordinary than the patron saint of legend, a passionate, courageous, and very human figure who exerted an incalculable impact on the course of Irish history.

We also have to recognize that many of the people who are considered saints from the early Christian church might not have even existed.

So did St. Patrick even exist and if so, who was he?

St. Patrick probably did exist, but many of the things attributed to him might not have happened, or they might have been confused with tales attributed to other people.

Much of what we know about St. Patrick comes from the fact that he wrote an autobiography that survived.

He was born sometime in the late 4th century in Roman Britain. The date of birth often given for him is 386, but there is a lot of doubt about that date.

His birth name was P?tricius, which is a Roman name. Patrick is an anglicization and in Irish, his name is Pádraig. Hence, if you want to shorten the name of the day it should be St. Paddy’s Day, with a D, not Patty, spelled the same as a hamburger patty.

The big story out of Patrick’s childhood was his abduction by pirates. Supposedly he was taken to Ireland where he was enslaved for six years. During his captivity, he converted to Christianity from paganism.

After six years, he escaped and traveled 200 miles to an Irish port, convinced the captain to let him on board, and then walked for 28 days to get back to his family.

When he returned to his family he continued his study of Christianity and eventually became a priest.

In the year 432, he was ordained as a bishop and was sent to Ireland to convert the pagans on the island.

His mission to convert the Irish was largely successful. He established missions, created an organization of priests and deacons for the island, and baptized thousands of people. He did run up against resistance from many of the tribal rulers on the island, especially because he was a foreigner.

The use of the shamrock as the symbol of Ireland supposedly comes from St. Patrick. He used the shamrock, which is a three-leaf clover, to explain the trinity to the people he was preaching to. There aren’t many mentions of the prior to the 18th century, so it might be a legend.

Likewise, the story most people know of St. Patrick is that he supposedly drove all the snakes out of Ireland. According to the legend, he was fasting for 40 days on the top of a hill when he was attacked by snakes. He then chased them all into the sea.

There were many other miracles that were attributed to him including turning his walking stick into a living tree.

His feast day of March 17 is supposedly the day he died. His burial site is believed to be at Down Cathedral in Downpatrick, Ireland.

St. Patrick’s Day was mostly just a normal religious feast day in Ireland with added significance because St. Patrick was the patron saint of Ireland.

Most of the modern traditions we associate with St. Patrick’s Day, oddly enough, didn’t come from Ireland. They came from the Irish diaspora, primarily the Irish living in the United States.

The first St. Patrick’s Day parade was recorded as having taken place in 1601 in the Spanish colony of Florida, in the city of St. Augustine.

Boston held its first parade in 1737 and in 1772, Irish soldiers in the British Army celebrated St. Patrick’s Day with a parade and festivities in New York City.

These celebrations were a way for Irish people who were away from home to celebrate their Irish culture with other Irishmen.

After the American Revolutionary War, the celebrations spread to other cities with large Irish populations.

In the early 19th century, Irish aid societies such as the Sons of St. Patrick and the Hibernian Society began sponsoring more St. Patrick’s Day parades and festivities.

In 1848, the various Irish societies in New York joined together to create the New York City St. Patrick’s Day Parade, which is still celebrated today.

The popularity of the St. Patrick’s Day festivities in the mid 19th century coincided with the surge in Irish Immigration to America due to the Irish potato famine. Prior to this, most Irish immigrants to the US were protestant, but after 1845, the vast majority were Catholic.

If you are wondering why protestants were celebrating St. Patrick’s Day before that, St. Patrick is also recognized as a saint in the Anglican Church.

There was a great deal of anti-Irish sentiment in American during the 19th century, and the St. Patrick’s Day celebrations were a way of showing unity and fighting back.

The association of the color green with Ireland only dates back to the 11th century and The Book of the Taking of Ireland. This was further solidified with the green harp flag which was adopted by the Irish Catholic confederation in the 17th century.

Oddly enough, the color associated with St. Patrick himself was usually blue, not green. In 1783 the Order of St. Patrick adopted blue as its color, but the Irish green eventually won out over the St. Patrick blue as the day became more associated with Irish identity than it did the saint.

The City of Chicago famously dyes the Chicago River green on St. Patrick’s Day. This tradition started in 1962 and actually started with sewage workers who used the dye as a way to determine the source of leaks. The total amount of dye used is only 40 pounds.

Leprechauns have decidedly have nothing to do with St. Patrick. They come from ancient Celtic traditions. Supposedly they are solitary fairies who are often engaged in cobbling and have magical powers. They are neither good nor evil, but would often play tricks.

The traditional food of corned beef and cabbage is, not surprisingly, an American invention, not an Irish one. It was a staple of poor Irish immigrants in the 19th century who often would get corned beef from Jewish butchers in major cities.

Today, St. Patrick’s Day is celebrated all over the world, especially in Irish pubs, which are truly a global institution.

In Ireland, there is now a three-day St Patrick’s Festival and the Irish government now uses the global celebration of St. Patrick’s Day as their primary means of Irish cultural promotion.

So, the modern St. Patrick’s Day celebration involves a day named after a saint born in Britain, celebrating Ireland, with traditions that actually started in America.

I enjoy the brief, but, educational information!

Thank you very much, Jill. If you manage to learn at least one thing new in every episode, I think I’ve done my job.

Thanks to all of you who have left reviews and support the show over on Patereon.com. Rember, if you leave a five-star review, you too can have your review read on the show.