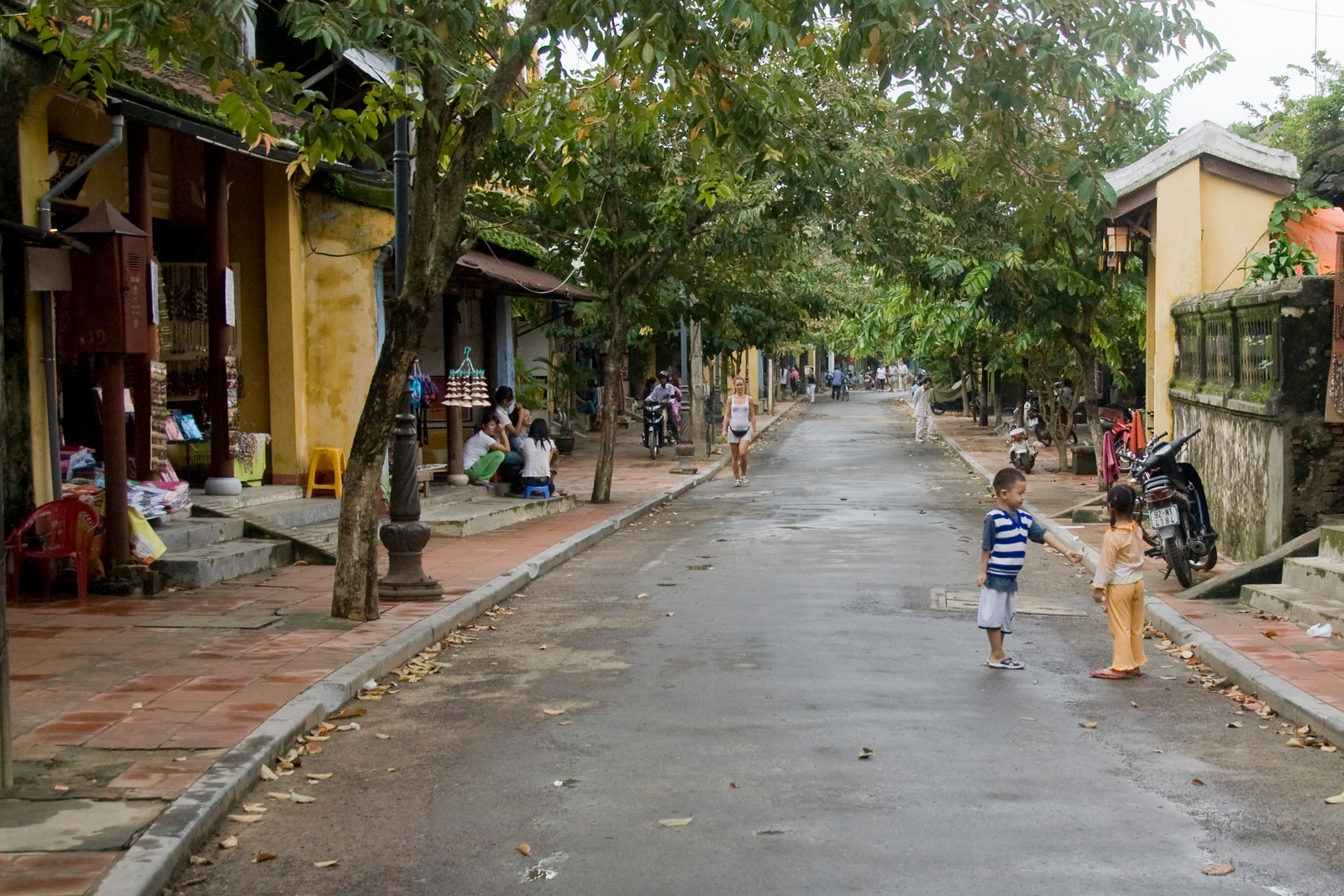 From the World Heritage inscription for Hoi An Ancient Town:

Hoi An Ancient town is located in Viet Nam’s central Quang Nam Province, on the north bank near the mouth of the Thu Bon River. The inscribed property comprises 30 ha and it has a buffer zone of 280 ha. It is an exceptionally well-preserved example of a small-scale trading port active the 15th to 19th centuries which traded widely, both with the countries of Southeast and East Asia and with the rest of the world. Its decline in the later 19th century ensured that it has retained its traditional urban tissue to a remarkable degree.

The town reflects a fusion of indigenous and foreign cultures (principally Chinese and Japanese with later European influences) that combined to produce this unique survival.
The town comprises a well-preserved complex of 1,107 timber frame buildings, with brick or wooden walls, which include architectural monuments, commercial and domestic vernacular structures, notably an open market and a ferry quay, and religious buildings such as pagodas and family cult houses. The houses are tiled and the wooden components are carved with traditional motifs. They are arranged side-by-side in tight, unbroken rows along narrow pedestrian streets. There is also the fine wooden Japanese bridge, with a pagoda on it, dating from the 18th century. The original street plan, which developed as the town became a port, remains. It comprises a grid of streets with one axis parallel to the river and the other axis of streets and alleys set at right angles to it. Typically, the buildings front the streets for convenient customer access while the backs of the buildings open to the river allowing easy loading and off-loading of goods from boats.

The surviving wooden structures and street plan are original and intact and together present a traditional townscape of the 17th and 18th centuries, the survival of which is unique in the region. The town continues to this day to be occupied and function as a trading port and center of commerce. The living heritage reflecting the diverse communities of the indigenous inhabitants of the town, as well as foreigners, has also been preserved and continues to be passed on. Hoi An Ancient Town remains an exceptionally well-preserved example of a Far Eastern port.

Hoi An is one of the stops on the typical tourist route from Saigon to Hanoi. A very small town near the sea, it was a trading port for hundreds of years. It has an architectural style unlike what you will find in the rest of Vietnam.

It isn’t the flashiest of sites, but it is a nice city and a worthwhile place to visit if you are in central Vietnam.

Hoi An Ancient Town is a UNESCO World Heritage Site located in the Quang Nam province of Vietnam. It was inscribed into the list in 1999. The city currently has about 120,000 in population. The historic district is one of the best-preserved examples of the Southeast Asian trading ports from the 16th and 17th centuries. From the buildings to the street plans, the unique blend of indigenous and foreign influences is evident in Hoi An. The Japanese Bridge in the old town district of Hoi An is one of the most distinctive landmarks in the area. It was built in the 16th or 17th century.

Today, the trading activity had long moved elsewhere. However, the historical heritage of the Hoi An Ancient Town is strongly preserved.

The Old Town in Hoi An is where the highest concentration of preserved buildings and structures are during the time of the city being a major trading port. It is small enough to explore on foot. Plus, it is not as heavily populated so traffic is not an issue just like the bigger cities in Vietnam. There are some streets in the Old Town that only allow motorbikes and there are also those dedicated only for pedestrians. For this reason, a lot of tourists like to visit Hoi An as it provides a nice change of pace from Saigon or Ho Chi Minh City.

Several of the buildings and other structures within the Old Town in Hoi An were constructed more than a century ago. They also exhibit a strong Chinese influence particularly from the provinces of Guangzhou, Hainan, and Fujian. The buildings, especially those from merchants, bear the company names in a carved out board that depicts Chinese characters. This is evidence of a strong Chinese presence in Hoi An during the prosperous times of the Old Town.

As mentioned above, the Japanese Bridge is the most distinctive landmark within Hoi An Ancient Town. But there are several other notable tourist attractions such as the Guan Yin Temple and the Chinese assembly halls.

There are many ways to travel to Hoi An Ancient Town. If you are coming from outside Vietnam, you can take a flight to Hanoi, Hue or Ho Chi Minh City. There are several flights to Vietnam from Bangkok, Siem Reap, Singapore, Cambodia, or Hong Kong. From the airport, you can take a metered taxi or the Hoi An airport transfer (which is recommended). There are also minibus taxis that you can take. All forms of transportation take about 45 minutes to reach Hoi An.

You can also via train to Hoi An. However, the nearest train station is in Da Nang. There are several train routes traveling within a day to Hanoi, Ho Chi Minh City, or Hue. You can book your train ticket to Da Nang via your hotel or travel agent. From the train station, you can take the bus to Hoi An.

The Japanese Covered Bridge is the most iconic landmark in Hoi An Ancient Town. The bridge is the best example of historical Japanese architecture in Vietnam. According to historians, it was built for by the Japanese in order to cross the Chinese quarters that was located on the other side of the town. The official opening of the bridge was in 1719; three Chinese symbols were also carved out above the door to the bridge to commemorate this momentous occasion.

Over the years, there have been restorations and renovations done to preserve the bridge. The most recent renovation was done in 1986. The bridge currently stands as a symbol of Hoi An.

13 thoughts on “Hoi An Ancient Town”