The Taj Mahal is located on the right bank of the Yamuna River in a vast Mughal garden that encompasses nearly 17 hectares, in the Agra District in Uttar Pradesh. It was built by Mughal Emperor Shah Jahan in memory of his wife Mumtaz Mahal with construction starting in 1632 AD and completed in 1648 AD, with the mosque, the guest house and the main gateway on the south, the outer courtyard, and its cloisters were added subsequently and completed in 1653 AD. The existence of several historical and Quranic inscriptions in Arabic script have facilitated setting the chronology of Taj Mahal. For its construction, masons, stonecutters, inlayers, carvers, painters, calligraphers, dome-builders and other artisans were requisitioned from the whole of the empire and also from Central Asia and Iran. Ustad-Ahmad Lahori was the main architect of the Taj Mahal.

The Taj Mahal is considered to be the greatest architectural achievement in the whole range of Indo-Islamic architecture. Its recognized architectonic beauty has a rhythmic combination of solids and voids, concave and convex and light shadow; such as arches and domes further increases the aesthetic aspect. The color combination of lush green scape reddish pathway and blue sky over it showcases the monument in ever-changing tints and moods. The relief work in marble and inlay with precious and semi-precious stones make it a monument apart.

There isn’t much to say about the Taj Mahal. It is one of the best-known structures on Earth. During the recent selection of the New Seven Wonders of the World, it was put on the list.

It is without question the single most identifiable thing associated with India. There are numerous Indian restaurants which use it as their name, and you can find a picture of it hanging in many others. If you are playing a video game like Civilization, the Taj Majal is almost always associated with India in some form.

Visiting the Taj Majal and seeing it in person, will convince you that all the attention and notoriety is well deserved.

There is nothing quite like it in scale or quality. If you visit other Mogul tombs before visiting the Taj (such as Humayun’s Tomb in Delhi or the nearby Little Taj in Agra) you will have a much greater appreciation just how magnificent it is. The earlier tombs can almost be considered beta versions of the Taj Mahal both in terms of size and quality.

If you visit the Taj Mahal, I highly recommend arriving as early as possible. The gates open at 7 am. I arrived at 5:50 am and was first in line. Being there first gives you an opportunity to take some photos without any people. Even 15 minutes after the gates open, the area will be filled with people. To do this you will have to stay overnight in Agra and not just take a day tour from Delhi.

Taj Mahal is a cultural UNESCO World Heritage Site in India. This is an ivory white marble mausoleum located in Agra, India. Before it was inscribed in the UNESCO list in 1983, it is already recognized as one of the top tourist attractions in India. In fact, there are up to 8 million visitors who come to see Taj Mahal every year (as of 2014).

The mausoleum is one of the grandest of its kind in the world. It has a height of 73 meters and was built from 1632 to 1653. It features Mughal architectural style and is a work of Architect Ustad Ahmad Lahauri. 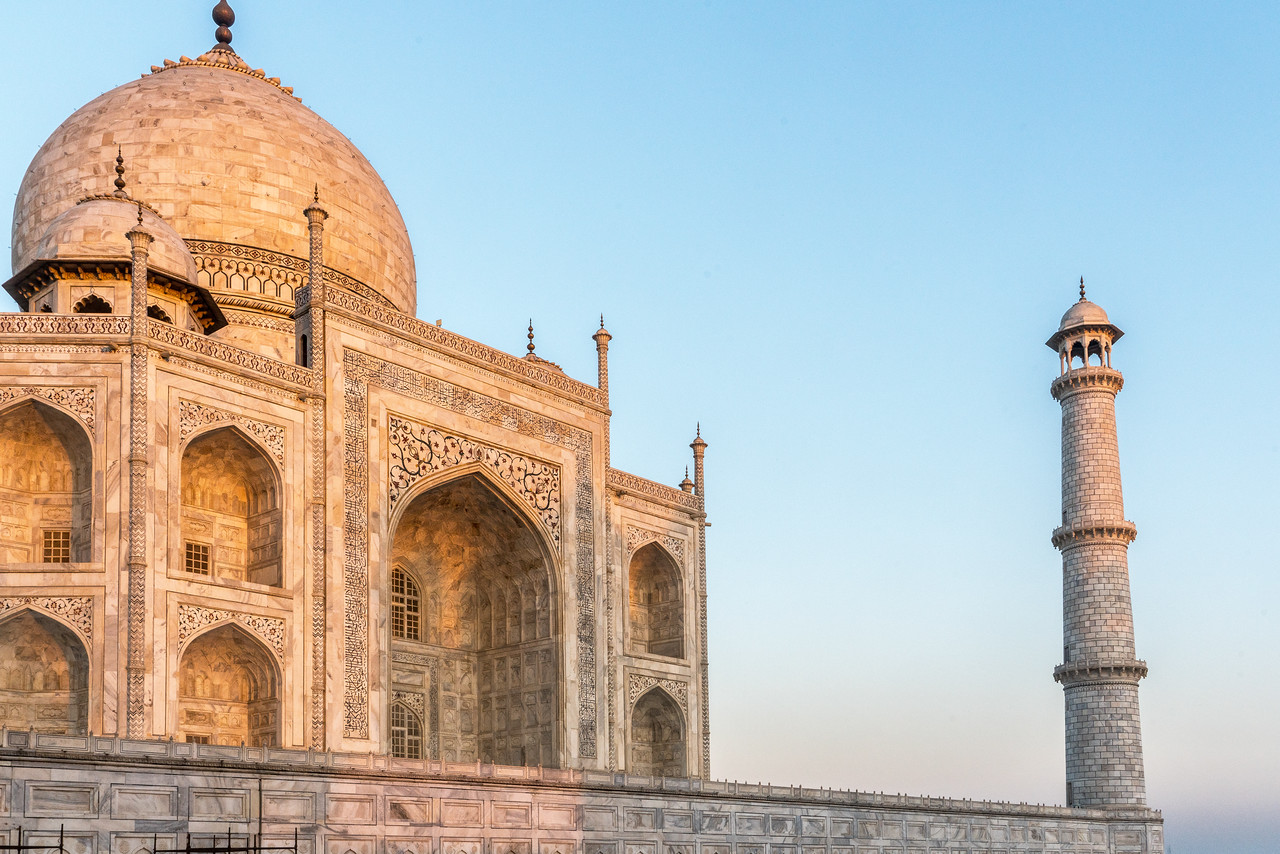 Taj Mahal is a mausoleum located along the southern bank of the Yamuna River. It was commissioned for by Mughal Emperor Shah Jahan (who reigned until 1658) in 1632. This UNESCO site has become a symbol of love and romance. In fact, it is referred to as the most extravagant profession of love. The name ‘Taj Mahal’ was coined after the wife of Shah Jahan – Mumtaz Mahal. The term also literally translates to ‘Crown Palace’

Emperor Shah Jahan intended for the mausoleum to house the tomb of his wife. The tomb is the focal point in the 17-hectare complex in Agra. Aside from the tomb, there is also a mosque and guest house. This exquisite white marble mausoleum is set in the middle of formal gardens that consist of a crenellated wall on all three sides.

The tomb is made up of white marble that stands on a square plinth. It is a symmetrical building that is accented by an arch-shaped doorway, which is completed by a finial and large dome. As with any other Mughal tombs, this one was also of Persian origin. The surmounting marble dome is the most exquisite detail about the tomb. Meanwhile, the tomb is about 35 meters high.

Even though this mausoleum was completed in 1643, more than 10 years since it was started, the work on the structure continued for another 10 years to finish other phases of the said project. The entire cost of building the mausoleum reached 32 million Rupees. There were over 20,000 artisans that were tapped to help with its construction.

When Taj Mahal was named a UNESCO site, it cited that this architectural piece served as the “jewel of Muslim art in India”. In addition, it is one of the few buildings that were also universally admired and recognized. To this day, it remains as one of the best showcases of Mughal architecture in history, as well as the symbol of the rich history and culture of India. It was named as one of the New7Wonders of the World in 2007. 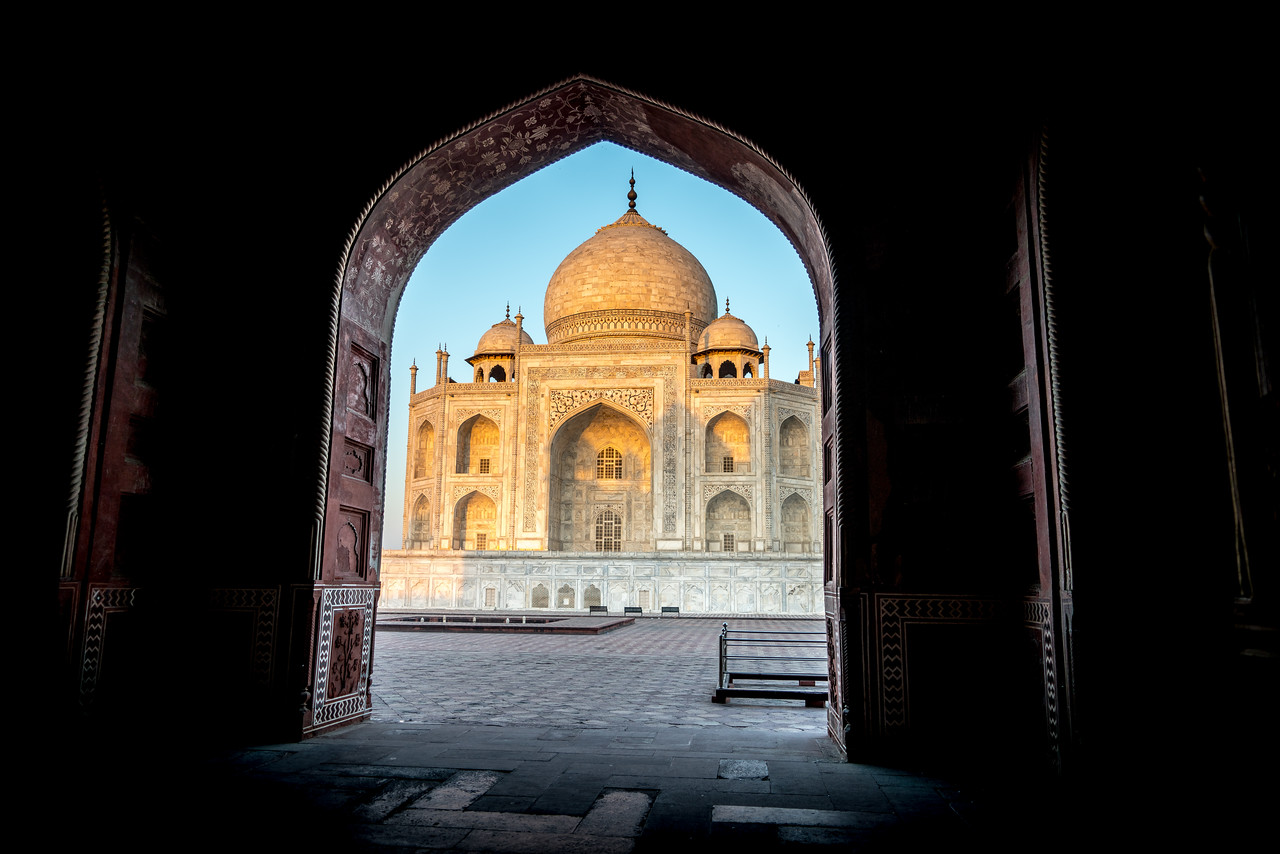 It is without a doubt that the Taj Mahal is one of the most visited tourist attractions in the world, not just in India. The number of tourists that visit this UNESCO site also grows with each year. In 2001, there was only an average of 2 million tourist visitors per year (which is no mean feat). By 2014, this number rose to as much as 8 million tourists annually.

The grounds of the Taj Mahal open from 6 AM to 7 PM on weekdays (except Friday wherein it is open only from 12 PM to 2 PM). For those who wish to visit the Taj Mahal, visitors are only allowed to bring 5 items with them when they enter the complex – transparent water bottles, small video cameras, mobile phones, purses for women, and still cameras. 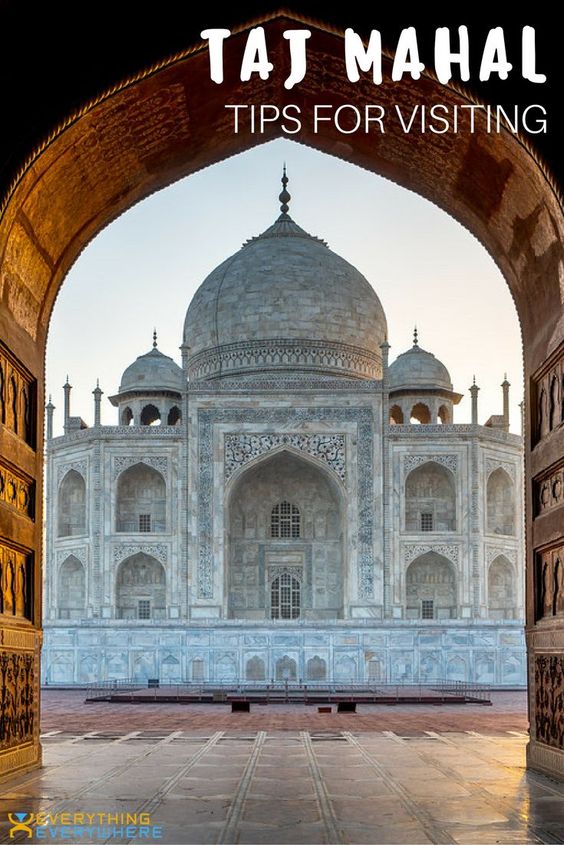