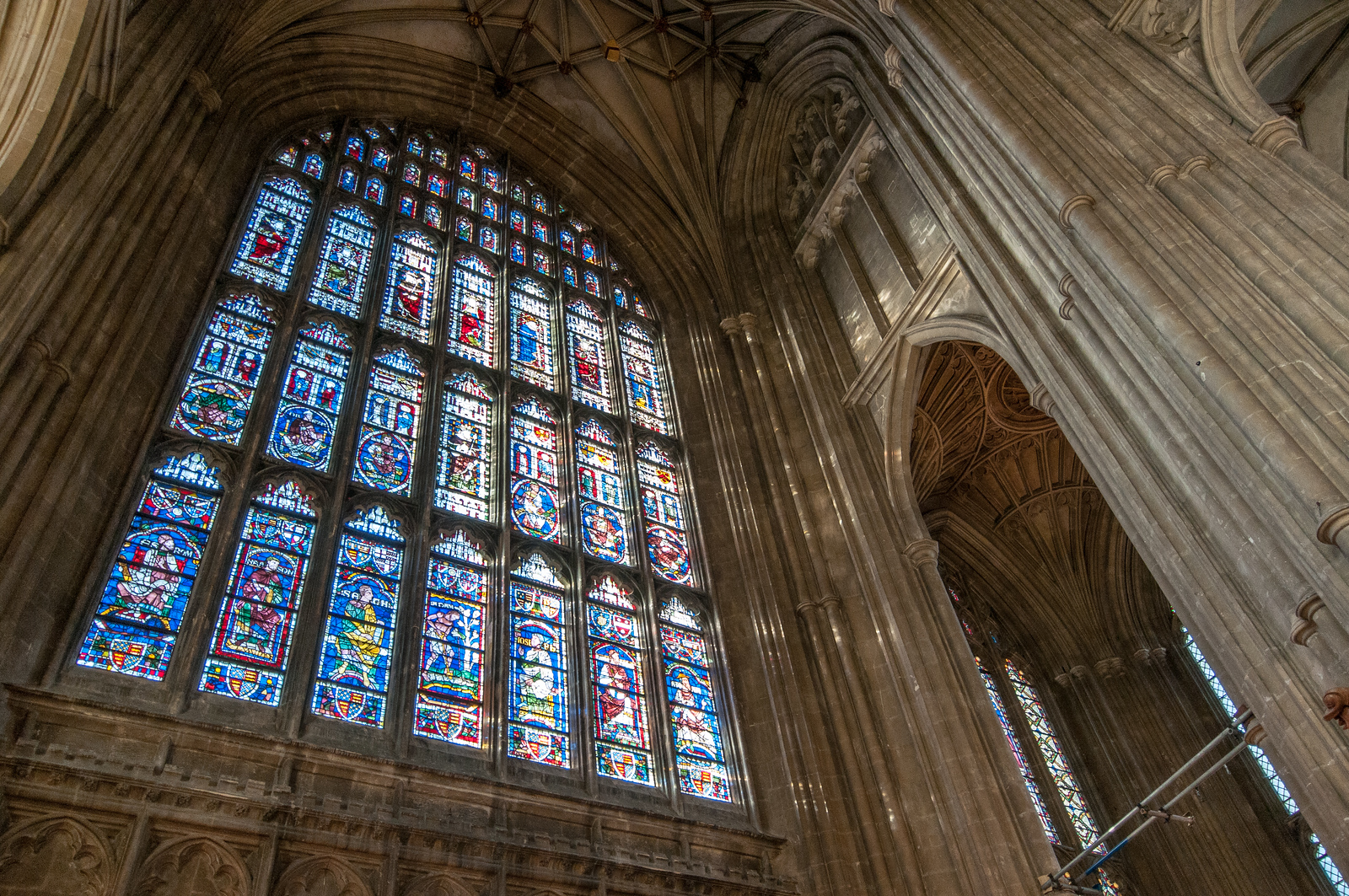 Canterbury, in Kent, has been the seat of the spiritual head of the Church of England for almost five centuries. St Martin’s Church, St Augustine’s Abbey and the cathedral are directly and tangibly associated with the history of the introduction of Christianity to the Anglo-Saxon kingdoms. The influence of the Benedictine abbey of St Augustine was decisive throughout the high Middle Ages in England. The influence of this monastic center and its scriptorium extended far beyond the boundaries of Kent and Northumbria. Christ Church Cathedral, especially the east sections, is a unique artistic creation. The beauty of its architecture is enhanced by a set of exceptional stained glass windows which constitute the richest collection in the United Kingdom.

Within the urban perimeter of Canterbury, three distinct cultural properties are on the World Heritage List: the modest St Martin’s Church; the ruins of St Augustine’s Abbey; and the superb Christ Church Cathedral, a breathtaking mixture of Romanesque and Perpendicular Gothic, where Archbishop Thomas Becket was murdered in 1170. These three monuments are milestones in the religious history of the regions of Great Britain before the Reformation.

St Martin’s Church, to the east, located outside the walls of Roman Durovernum, existed in 597 when the monk Augustine was sent from Rome by Gregory the Great to bring Christianity to the Saxon kingdom of Kent. The church was built for the most part before the 8th century. It undoubtedly includes a Roman structure from the 4th century. Of the church located within the city walls, which St Augustine made his cathedral (probably at the very spot where Christ Church now stands) nothing has been conserved. However, ruins of the abbey are still visible, halfway between St Martin’s Church and the cathedral. The abbey was dedicated to the Apostles Peter and Paul. In 978 the primitive institution, a veritable cradle of Benedictine monasticism in England, was restored following the Scandinavian invasions. The abbey buildings virtually disappeared in their entirety following the dissolution of the Community by Henry VIII in 1538. The Royal Palace that stood in their place was located against the northern side aisle of the nave. It included the gutter wall and a few old portions, but this structure, too, has disappeared.

I’m guessing that most people in the western world have at least heard of Canterbury Cathedral. It was the subject of one of the most well-known works of Middle English: The Canterbury Tales by Geoffrey Chaucer. It was the site of the assassination of Thomas Beckett, who was later sainted. It was the location where St. Augustine established the first cathedral in England and it was also a key location in the English Reformation.

I had been to London probably a dozen times and never bothered to take the hour-long train trip to Canterbury. I finally got around to visiting, and I am glad I did. Not only is the cathedral worth visiting for its history and architecture, but the town of Canterbury itself is one of the nicest towns in England which I’ve visited. Despite how well known the cathedral is, I never got the impression that the town was touristy.

There are regular trains that run to Canterbury from Paddington and Victoria Stations in London. The trip is approximately 60-90 minutes.

The Canterbury Cathedral, St Augustine’s Abbey, and St Martin’s Church are a cultural UNESCO World Heritage Site in the United Kingdom. It is a Christian religious structure consisting of several historical monuments. Located in Canterbury, Kent, this World Heritage Site was inscribed in 1988.

All of these monuments serve as the perfect representation of Christianity among the Anglo-Saxon kingdoms. These monuments and religious structures are located within the seat of the spiritual head of the Church of England.

The Canterbury Cathedral, St Augustine’s Abbey, and St Martin’s Church is a collective site consisting of three of the most important religious monuments in Canterbury, England. Each of the sites represents a different type of significance. Therefore, it is important to take a closer look at each monument.

The Canterbury Cathedral, also known as Christ Church Cathedral, was founded by Augustine. It was founded in the early 7th century. But when Archbishop Thomas Becket was killed here, it has been known as a popular pilgrimage site. In fact, thousands of pilgrims flock here on an annual basis. It is now known as the cathedral for the Archbishop of Canterbury. In addition to its historical significance, the cathedral is regarded for its architectural beauty and stained glass windows.

It is also one of the most popular monuments in the World Heritage Site Canterbury Cathedral, St Augustine’s Abbey, and St Martin’s Church.

Saint Augustine’s Abbey was founded by Benedictine monk Saint Augustine in 598. This abbey had a major influence during the High Middle Ages in England. For many centuries, this abbey underwent several rebuilding processes. However, it fell into a state of disrepair during the 16th century. Today, only ruins are left of this abbey after Henry VIII dissolved all Catholic monasteries in England.

This is the final component of the UNESCO site Canterbury Cathedral, St Augustine’s Abbey, and St Martin’s Church. This is the oldest parish church in England that is still in use today. During the 6th century, it served as the private chapel of Queen Bertha. This was prior to the arrival of Augustine in Rome.

All of these three monuments represented the history of Christianity in England in tangible form. The architecture was also a symbol of how the Christian religion coincided with the development of Anglo-Saxon. Hence, these buildings were mostly constructed using Gothic and Romanesque architectural styles.

View my complete list of UNESCO World Heritage Sites in the United Kingdom.