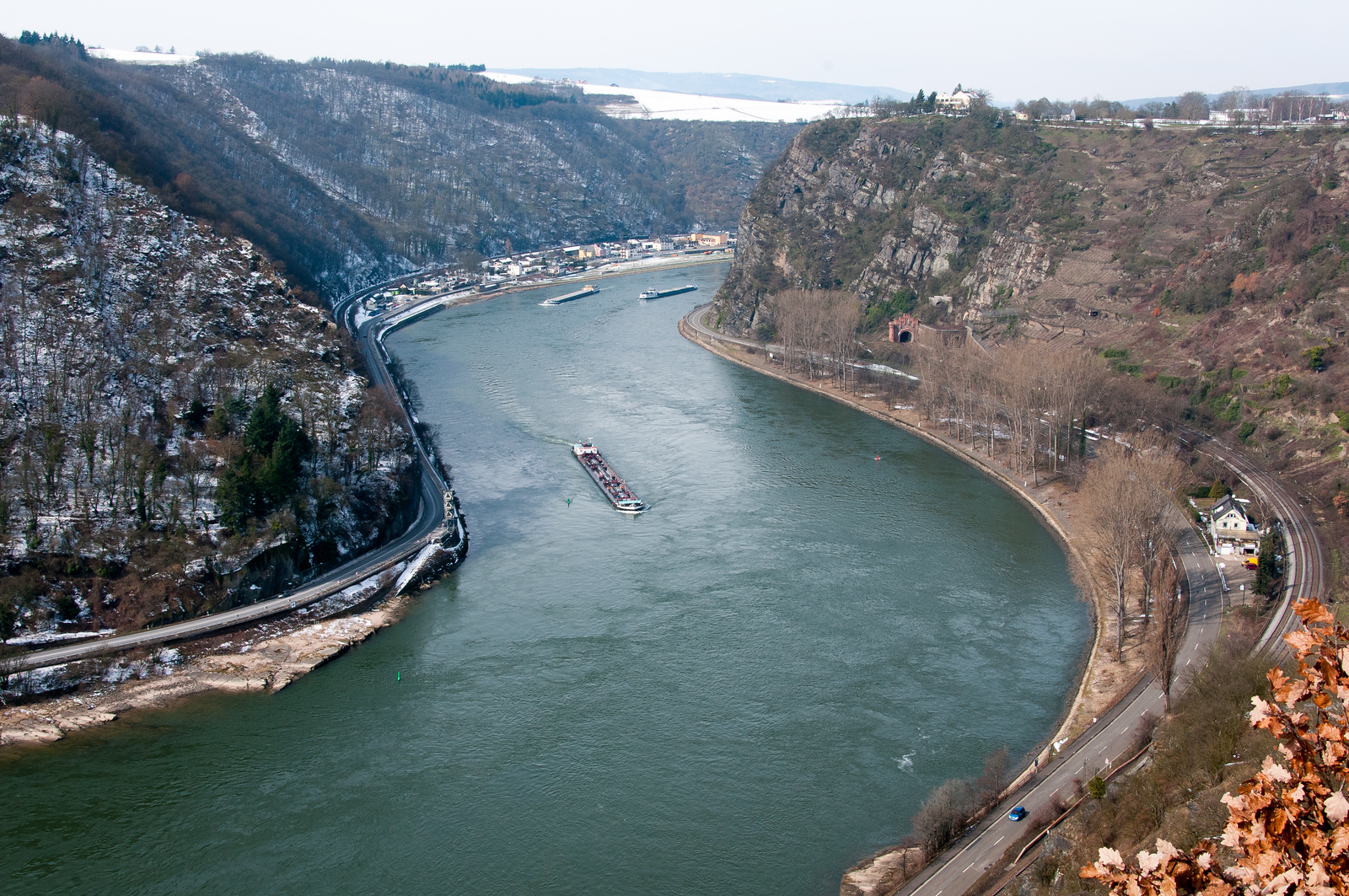 The strategic location of the dramatic 65km stretch of the Middle Rhine Valley between Bingen, Rüdesheim und Koblenz as a transport artery and the prosperity that this engendered is reflected in its sixty small towns, the extensive terraced vineyards and the ruins of castles that once defended its trade.

The river breaks through the Rhenish Slate Mountains, connecting the broad floodplain of the Oberrheingraben with the lowland basin of the Lower Rhine. The property extends from the Bingen Gate (Binger Pforte), where the River Rhine flows into the deeply gorged, canyon section of the Rhine Valley, through the 15km long Bacharach valley, with smaller V-shaped side valleys, to Oberwesel where the transition from soft clay-slates to hard sandstone, results. In a series of narrows, the most famous of which is the Loreley, no more than 130m wide (and at 20m the deepest section of the Middle Rhine), and then up to the Lahnstein Gate (Lahnsteiner Pforte), where the river widens again into the Neuwied Valley. The property also includes the adjoining middle and upper Rhine terraces (Upper Valley) which bear witness to the course taken by the river in ancient times.

As a transport route, the Rhine has served as a link between the southern and northern halves of the continent since prehistoric times, enabling trade and cultural exchange, which in turn led to the establishment of settlements. Condensed into a very small area, these subsequently joined up to form chains of villages and small towns. For over a 1,000 years the steep valley sides have been terraced for vineyards.

The landscape is punctuated by some 40 hill top castles and fortresses erected over a period of around 1,000 years. Abandonment and later the wars of the 17th century left most as picturesque ruins. The later 18th century saw the growth of sensibility towards the beauties of nature, and the often dramatic physical scenery of the Middle Rhine Valley, coupled with the many ruined castles on prominent hilltops, made it appeal strongly to the Romantic movement, which in turn influenced the form of much 19th century restoration and reconstruction.

The Upper Middle Rhine Valley is by far the largest cultural world heritage site in Germany. It covers a 65km stretch of the Rhine river from Koblenz to Bingen.

Within that stretch of river, you will find 40 forts and castles, one of Germany’s greatest wine producing regions as well and one of Europe’s most important transportation routes with barges, trains, and cars going up and down both banks of the river.

The Rhine was also the border of the Roman Empire and has also been fought over for the last two thousand years by countless armies, lords, and kings.

I was in the Rhine Valley for less than a day, which is really not enough to experience the region properly. I’d plan at least 2-3 days if not more.

The Upper Middle Rhine Valley is a cultural UNESCO World Heritage Site. It is a 65-kilometer section of the Rhine that is right in the middle of Bingen and Koblenz. It was recognized by UNESCO as a World Heritage Site in 2002. According to UNESCO, the site features a combination of cultural, historical, geological, and industrial significance.

The area draws thousands of tourist visits on an annual basis. In fact, the popularity of this region as a tourist destination goes back to the 19th century. The travelers loved coming here to marvel at the romantic ambiance of the Rhine.

The following towns and cities are comprised within the protected area of the Upper Middle Rhine Valley UNESCO site:

The Upper Middle Rhine Valley is flocked by tourists for a number of reasons. One of the most significant natural features in the region are the sedimentary slate rocks that are abundant in the area. These rocks were formed out of a phenomenon known as folding, which dates back to the Carboniferous period. Over the years, the gorge was carved out to form steep walls with some as high as 200 meters.

Because of the unique natural feature and formation, the Upper Middle Rhine Valley also has its own microclimate. This unique climatic condition has facilitated in the survival of various species found within the region. Meanwhile, the terraces are known to be a site for agricultural activity and then later for viticulture. You can find plenty of vineyards in the Upper Middle Rhine Valley region particularly in Mittelrhein.

In addition to the agricultural and viticulture activity, the region is also known as an important trade route, thanks to its proximity to the river. This trade activity was traced back to the prehistoric times. In fact, there were several small settlements along the river basin that took advantage of the booming trade activity within Central Europe.

Due to the fact that the towns and cities that make up this UNESCO area are small in size, they have mostly remained intact and their historical past is evident today. In fact, many of the castles that were built during the height of this region’s wealth are still standing. Today, the river cruises along the Upper Middle Rhine Valley take full advantage of these castle ruins as tourists are given the opportunity to explore them.