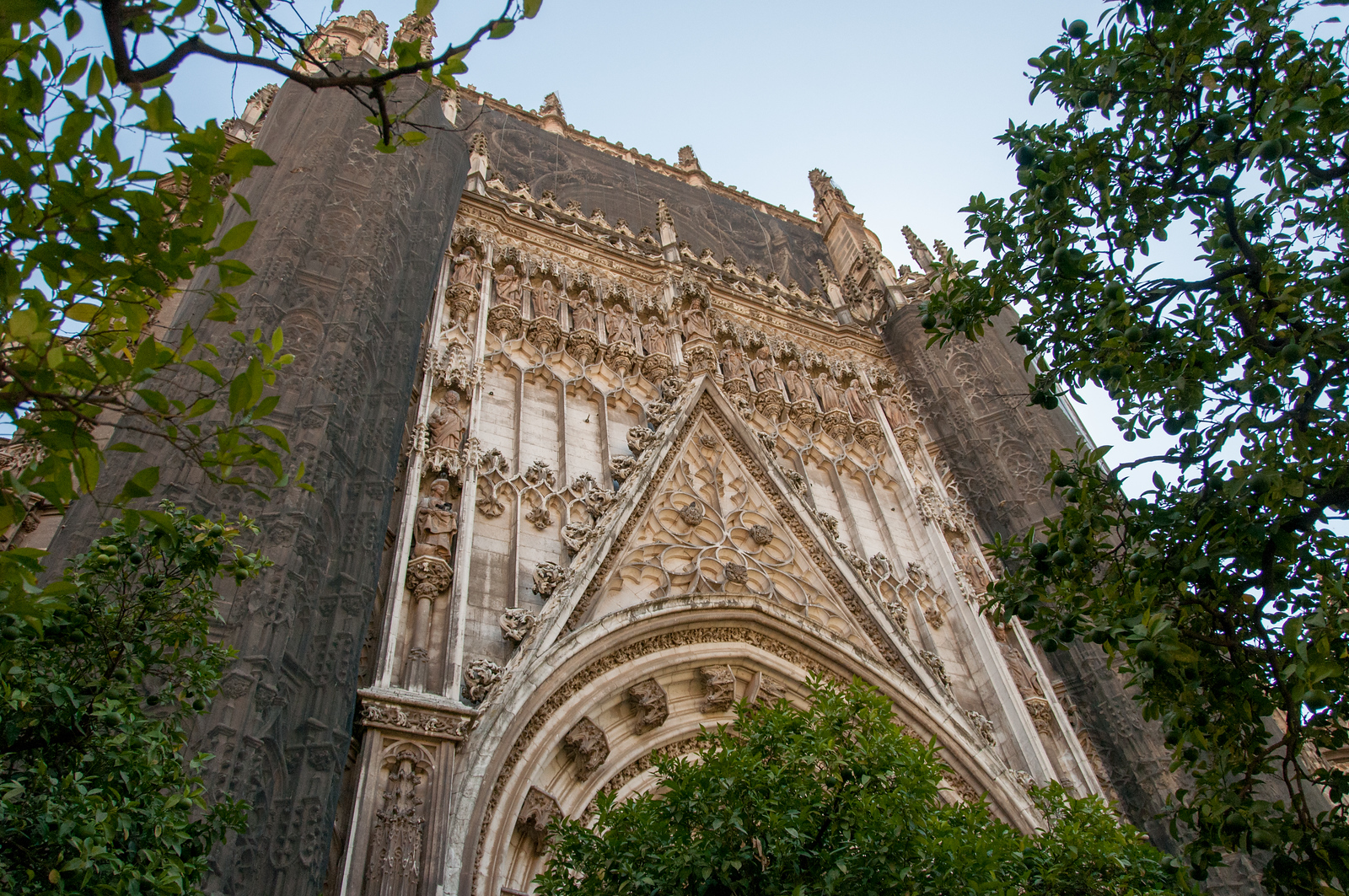 Together, the Cathedral, Alcázar and Archivo de Indias as a series, form a remarkable monumental complex in the heart of Seville. They perfectly epitomize the Spanish “Golden Age”, incorporating vestiges of Islamic culture, centuries of ecclesiastical power, royal sovereignty, and the trading power that Spain acquired through its colonies in the New World.

Founded in 1403 on the site of a former mosque, the Cathedral, built in Gothic and Renaissance style, covers seven centuries of history. With its five naves, it is the largest Gothic building in Europe. Its bell tower, the Giralda, was the former minaret of the mosque, a masterpiece of Almohad architecture and now is an important example of the cultural syncretism thanks to the top section of the tower, designed in the Renaissance period by Hernán Ruiz. Its “chapter house” is the first known example of the use of the elliptical floor plan in the western world. Ever since its creation, the Cathedral has continued to be used for religious purposes.

The cathedral in Seville is the largest Gothic cathedral in the world and the third largest church overall. It took over the title of the largest church in the world from the Hagia Sophia in Istanbul which held the title for over 700 years. It is also the burial site for Christopher Columbus who’s body was interred there in the early 20th Century. The bell tower was built to resemble the Koutoubia Mosque in Morocco.

Seville should be a high priority for any trip to Spain. The high-speed train makes it very accessible from Madrid.

The Cathedral, Alcázar and Archivo de Indias in Seville is a UNESCO World Heritage Site in Spain. It is a cultural UNESCO site that was inscribed in 1987. Prior to that, it has already been named as a Spanish Property of Cultural Interest since 1928. Hence, this is an important monument that is also known for its global significance.

About Cathedral, Alcázar and Archivo de Indias in Seville

According to UNESCO, these three sites form a remarkable monumental complex that represents the culture and history of Seville. Both the Alcazar and the Cathedral date back to the 13th century to the 16th century, wherein there is a deep Moorish influence on the culture and shown tremendous development for civilization.

If you are planning to visit any of these 3 sites, it is important to know what to expect before you go:

Archivo de Indias: This 16th-century building is a haven for the cultural buff as it houses maps, documents, and other related artifacts that refer to the voyages of the New World. These documents cover a span of three centuries so there are plenty of them! It is truly an extraordinary research resource for the culture and history folks!

Catedral de Sevilla: This is the most significant landmark that is part of this monumental complex that forms Cathedral, Alcázar and Archivo de Indias in Seville. The groundbreaking for this cathedral took place in 1401 but it was completed in 1528. It features Gothic architectural style and is still active until today. This is an important and historically significant cathedral as this is the site of the baptism of Infante Juan of Aragon in the late 15th century. Meanwhile, the royal chapel of Seville Cathedral is where the remains of conqueror Ferdinand III of Castile is stored in. Meanwhile, Christopher Columbus and his son are also buried in the cathedral.

Reales Alcazares: This is the final site that makes up Cathedral, Alcázar and Archivo de Indias in Seville. This particular site is composed of a wide range of architectural styles that were influenced throughout various periods in history. It is also composed of different types of structures including courtyards, lush gardens, pools, baths, and more. There are concerts and various exhibitions held on the site throughout the summer.