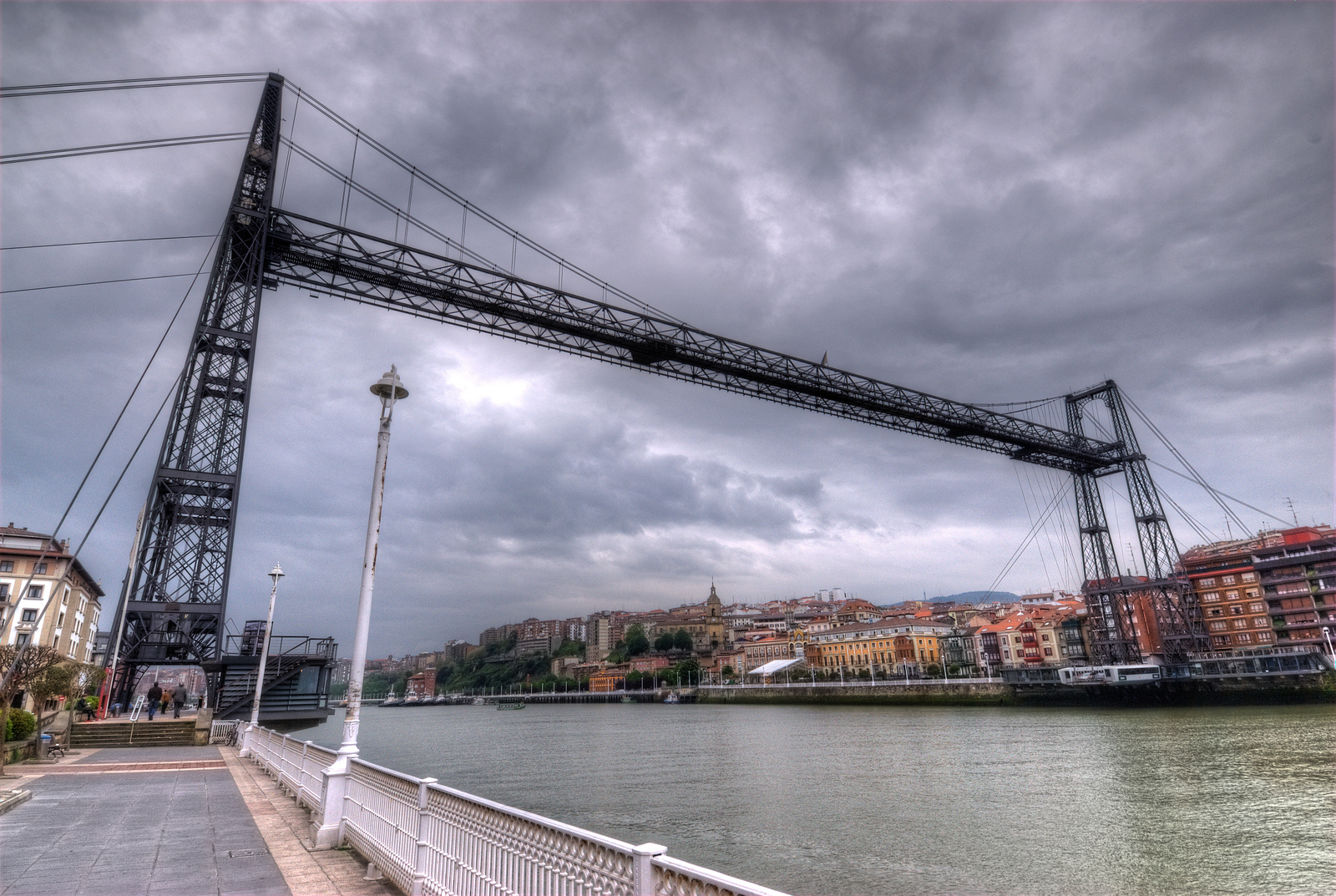 From the World Heritage inscription for the Vizcaya Bridge:

Vizcaya Bridge straddles the mouth of the Ibaizabal estuary, west of Bilbao. It was designed by the Basque architect Alberto de Palacio and completed in 1893. The 45-m-high bridge with its span of 160 m, merges 19th-century ironworking traditions with the then-new lightweight technology of twisted steel ropes. It was the first bridge in the world to carry people and traffic on a high suspended gondola and was used as a model for many similar bridges in Europe, Africa, and America only a few of which survive. With its innovative use of lightweight twisted steel cables, it is regarded as one of the outstanding architectural iron constructions of the Industrial Revolution.

I had no idea what this was until I visited Bilbao. I thought visiting a bridge would be sort of lame, but it turned out to be really interesting. The bridge is still functioning and carries cars and passengers every day. It can carry six cars every time the gondola goes across the river. If you visit, you can climb the bridge and cross it by foot on the top.

Vizcaya Bridge is one of the most unique UNESCO World Heritage Sites in Spain. This is the only site listed under the Industrial category. It was inscribed by UNESCO in 2006 for its innovative use of engineering that depicts the advancement of the construction industry during the Industrial Revolution era.

The Vizcaya Bridge links the Ibaizabal estuary from one side to the other. It is located in Bilbao, Spain and is designed by Basque architect Alberto de Palacio. The bridge was completed in 1893 and rises 45 meters high with a span of 160 meters. This was the first bridge to transport people and traffic using a high suspended gondola. A few years after it was completed, many other bridges in Europe adopted the same architectural and engineering techniques that Vizcaya Bridge innovated.

Vizcaya Bridge is also known among its locals as Puente Colgante, which literally translates to “hanging bridge”. The transporter bridge is made out of iron materials. Architect Alberto de Palacio worked with Engineer Ferdinand Arnodin throughout its construction process. The bridge started to open to the public in the same year it was completed, which is 1893. Thus, this makes this bridge as the oldest transporter bridge in the world.

The bridge was constructed to solve an issue when it comes to connecting the towns of Getxo and Portugalete in Bilbao. The engineers had to devise a way to make transport between these two towns possible without disrupting the Port of Bilbao’s already busy maritime traffic. When Palacio designed this bridge, he wanted to be able to transport not just people but also cargo, while still enabling ships to pass under the bridge.

To this day, the Vizcaya Bridge is still in use. This also makes it one of the oldest bridges that are still operational today after being built in the late 19th century. With the bridge earning its distinction as the only Industrial site in the list of UNESCO sites in Spain, it is considered to be the perfect example of beauty and functionality melding as one. It is also the first construction project to combine the use of new steel cables and iron technology. The bridge’s structure is made up of four 61-meter towers that serve as pillars on the river bank. Meanwhile, the bridge has its own gondola responsible for transporting vehicles, people, and cargo from one side of the bank to the other. The gondola moves through a horizontal crossbeam to facilitate transport.