Before I get too far into Europe, I figure I should go back and do a quick review of my time in the Czech Republic, Austria, Slovakia and Slovenia. It was only a quick trip of 10 days, but I was able to get a taste of the region and see some of the things which I’ve wanted to see. Here are some of my thoughts from the trip: 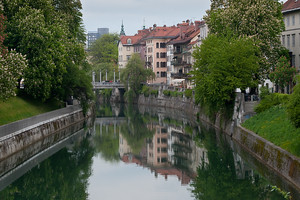 Ljubljana, Slovenia. I had no idea was I was in store for when I visited Ljubljana. When I arrived I couldn’t even pronounce it and I didn’t know much about it other than it was formerly in Yugoslavia. It is a charming city, very walkable, affordable by European standards and is one of the smallest capitol cities in Europe. The only downside to the city is that it has a pretty bad graffiti problem. I’m surprised that Ljubljana doesn’t get more of the backpacker crowd considering how cheap it is and how close it is to Vienna and Venice. 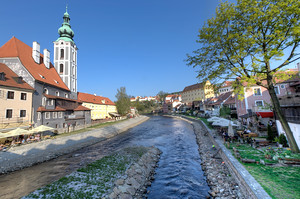 Cesky Krumlov My friend Jason told me about Cesky Krumlov so I changed my route to Vienna to go through here rather than through Brno. It was a good decision. I knew next to nothing about this town before I arrived and it turned out to be one of the high points of the trip. Cesky Krumlov is one of the most picturesque villages I’ve ever visited. The castle and walled town is straight out of central casting. It is a place I high recommend to anyone who is going to visit the Czech Republic.

Vienna, Austria. Maybe it was because I was there over the Easter weekend, but I felt that Vienna was really…..boring. The blocks of buildings seemed extremely uniform. Beyond St. Stephen’s Cathedral, there didn’t seem to be as much historic as I found in other European capitols. I’d certainly be willing to go back and give it another shot, but my first experience wasn’t much.

Bratislava, Slovakia I was only in Bratislava for one day and it was raining the whole time, so I’m not going to rip on it too much . That being said, what I saw while I was there wasn’t anything special. From the research I’ve done I think there are a lot of great things to see in Slovakia, I’m just not sure they are in Bratislava.

Slavic Languages Czech, Slovakian and Slovenian use a western alphabet, but that is about the only thing I can figure out about their languages. I can usually muddle my way around in French, Italian, Spanish or German speaking cities, but with Slavic languages I have nothing to fall back on. When I go to countries that use the Cyrillic alphabet, it might as well be Chinese for me.

Where I Most Want to Return

Prague, Czech Republic There is a lot to see in Prague and there was no way I could see it all in three days. It really is a rich cultural center and is deserving of much of the attention it gets. I hope to be back in Prague in November for the TBEX Europe conference. Now having been there I hope to be able to better plan some of my photos and the things I wish to visit.

My trip through Central Europe gave me a good tase of the region. I’m looking forward to going back exploring more of the region outside of the capitol cities.

16 thoughts on “Thoughts on my Central Europe Trip”