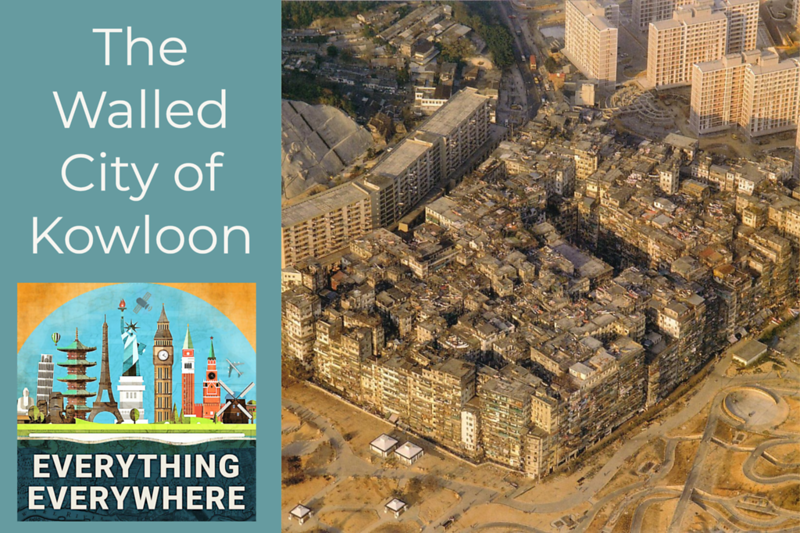 Not only was it packed with people, but it also had a unique political status. No government controlled it, which made it lawless, which in turn made it a magnet for organized crime.

Learn more about the Walled City of Kowloon, one of the most dangerous and densely populated places in history, on this episode of Everything Everywhere Daily.

To understand what the Walled City of Kowloon was, it is necessary to understand the history of Hong Kong because the two are intimately tied to each other.

The Walled City began its life almost 1,000 years ago as a fort built during the Song Dynasty.

The fort and the Hong Kong harbor were used for trading salt with neighboring countries.

It was a minor outpost in Imperial China for centuries and never warranted much attention until the 19th century.

The 19th century saw the arrival of Europeans who wanted access to the large Chinese market for trade. The Chinese, who for centuries had been isolated from the rest of the world, found themselves at an extreme disadvantage in firepower when it came to negotiating with the Europeans.

The Europeans were able to strongarm the Imperial Chinese government to sign several unequal treaties, including the Treaty of Nanking in 1848, which ceded control of Hong Kong to the British.

In 1898, another treaty was signed, the Convention for the Extension of Hong Kong Territory, which ceded the territory of Hong Kong and more territory to the north, known as the New Territories, for 99 years.

The one thing the Chinese were able to get was an exemption for the fort, which was located on the Kowloon side of the harbor.

This fort was known as the Walled City. At the time of the handover, it had a population of 700 people, was 2.6 hectares or 6.4 acres or 0.00969 square miles in area, and was the sovereign territory of China.

So, the walled city was, when modern Hong Kong was established, an old fort that was a Chinese-controlled exclave totally surrounded by British Hong Kong.

In 1899 the British invaded the walled city over concerns that the viceroy installed there was planning to destabilize British rule. When they entered, without resistance, they found almost everyone gone except for 150 civilians.

The British claimed control over the walled city, not that it really meant much in the big scheme of things.

In 1912, the Qing dynasty fell, which was the beginning of several decades of political upheaval in China. No one in China was really too concerned about a couple of acres in Hong Kong when there were far bigger issues to worry about.

The Walled City was mostly a tourist attraction in the first part of the 20th century. It was also known as “the Chinese City.”

The British announced that they were going to demolish the dilapidated buildings in the Walled City in 1933 and move the residences to new housing, but the Nationalist Government in China objected, claiming their rights under the 1898 treaty which ceded Hong Kong to the British.

Demolitions went ahead and by 1940 there was nothing left but a school and the old walls.

When the Japanese occupied Hong Kong, they tore down the walls, leaving next to nothing of the original structure.

After the war, the Chinese government again, very emphatically, reestablished their claim over the walled city. In a 1948 letter sent to the British Ambassador, they said, “The Ministry of Foreign Affairs now formally declare to the British Embassy that, in accordance with the provisions of the said Convention, the Chinese Government enjoys jurisdiction over the City of Kowloon and that they have no intention whatsoever of renouncing this jurisdiction.”

Around the same time, the Nationalist Government which was making these claims, they were losing a civil war to the communists. This resulted in a flood of refugees entering Hong Kong, many of whom settled in the walled city, which of course, now did not have any walls at all.

The British were fine with the Chinese Nationalist government administering the walled city, but they encouraged them to send a Consul General so they could administer it properly.

Given the Chinese jurisdictional concerns, the British took a hands-off approach to the walled city. That meant they were going to do anything inside the area, including enforcing any Hong Kong laws there.

With the British unwilling to administer the Walled City, and the Chinese unable to do so, organized crime stepped into the vacuum. The Chinese triads.

By 1950, the Walled City was getting quite crowded. There were at least 17,000 people living there when a massive fire broke out. The fire destroyed at least 2,500 wooden huts.  Many people suspect the fire was intentionally set so new construction could take place.

The Triads used the walled city as a haven for prostitution, gambling, and the drug trade.

In the 1960s a construction boom began in the walled city. As there was effectively no government there, there were no building, fire, or electrical codes as well.

Over 300, 10 to 14-story buildings were crammed into the tiny area which constituted the Walled City. It was during this period from the late 60s through the 90s that the Walled City developed the look it was famous for.

It appeared to be one giant structure like something from an even more dystopian version of Blade Runner.

Life there was unique, to say the least. The crime rate was quite high through the early 1970s, but eventually, the Hong Kong police had enough and began a series of raids into the Walled City. While criminals did find a sanctuary there, the vast majority of the people in the Walled City had nothing to do with crime.

The residents of the Walled City mostly supported the police raids, and by 1983, the Hong Kong police claimed that crime there was under control.

The Walled City was on the flight path of the airport, which meant jets were flying overhead all the time, making it quite noisy.

There were only eight water pipes servicing the Walled City, and the entire area was serviced by a single postal worker.

There were numerous unlicensed doctors and dentists who worked in the Walled City, and there were rows of dentists on the ground floor of the buildings which faced out.

While it would certainly be considered a slum, it also worked in its own way. The people who lived there had to work together to make the water and electrical systems work. Pipes and wires could be seen everywhere.

In the alleys between the buildings, there was almost always water dripping, which caused many residents to take an umbrella everywhere.

The Walled City had schools, medical clinics, child care, and other services.

By the early 80s, the Communist government in China, despite continuing to claim jurisdiction, really didn’t want anything to do with this mess.

In 1983, the British and Chinese established their intent to tear down the walled city, and they announced the plan in 1987. The new plan was to build a park on the site.

However, this was easier said than done. They basically had to forcefully remove everyone who lived there. Compensation was given to residents to let the resettle, but not everyone was happy with the situation.

It took nine months between November 1991 and July 1992 to evict everyone. As people began leaving, and before demolition took place, architects went in to study how the Walled City managed to function.

They were amazing at the ingenuity used to provide services to their residents.

“I was fascinated — it was like a piece of machinery that worked very well. The demolition was like taking the machine apart — the first time, you could see what was inside.

“It was a really humbling process for me as a designer — when we met this Walled City, we started to see that people could be more intelligent than us, the designers — that they could think of ways to solve problems that are outside the traditional academic world.”

The demolition took place over the course of a year from March 1993 to April 1994.

Today, the Kowloon Walled City Park is located in the former location of the site. If you visit, you’d never know what was once there unless someone told you.

On July 01, 1997, Hong Kong was handed over from the British to the Chinese, and the whole issue of jurisdiction over the land became moot.

The Walled City of Kowloon is long gone, but you can at least get a taste of what it was like if you visit the Chungking Mansion on Nathan Road in Kowloon. It is a far cry from the Walled City, but it is one enormous building that has a motley collection of guesthouses, restaurants, residences, and shops.

I’ve actually stayed at the Chungking Mansion twice, and despite its low-cost reputation, you can find some of the best South Asian and Middle Eastern restaurants in Hong Kong there….but it is no Walled City.

Even in densely populated urban areas in developing countries such as Sao Palo, Mumbai, or Lagos, you are unlikely to ever find something like the Walled City again.