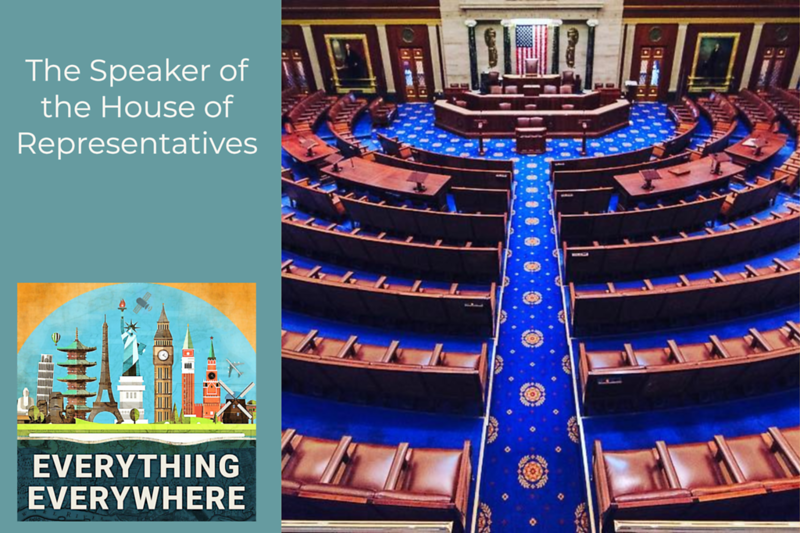 The United States Congres is divided into two houses. The larger of the two houses, the House of Representatives, is led by a single representative known as the Speaker of the House.

The duties and powers of the Speaker of the House have changed since the office was established in 1789 as they are entirely determined by the members of the House of Representatives itself.

Learn more about the Speaker of the House, the duties of the position, and its history on this episode of Everything Everywhere Daily.

The history of the Speaker of the House begins with Article 1 of the constitution, which says,” The House of Representatives shall chuse their Speaker and other Officers…”

The only other mention of the Speaker of the House is in the 25th Amendment, which is dedicated to presidential succession.

The reason why a speaker was specifically mentioned in the constitution is that the position was based on the role of speaker in the British parliament.

The role of speaker in the British Parliament is that of an impartial and apolitical officer whose job is to oversee the proceedings. It is distinct from the political roles of Prime Minister.

Despite being an impartial role, the Speaker of the house of Commons is always selected from its ranks.

The duties of the president of the Continental Congress were like those of the speaker of the House of Commons in that it was mostly ceremonial and procedural.

When the United States Constitution was written, the position of speaker was just sort of assumed as a given for the House of Representatives.

What isn’t known, and what has been debated, is what exactly the role of speaker was supposed to be. Because there are no roles or functions for the Speaker outlined in the constitution, it isn’t certain if the writers of the constitution intended for the speaker to be an impartial, neutral role similar to the Speaker in the House of Commons or if it was intended to be a more active, partisan position, which it later became.

For the first eleven congresses, there were six different Speakers of the House. These early speakers mostly held ceremonial roles and focused on order and procedure. They also tended to have regional alliances and promoted regional agendas.

The person who changed the role of Speaker was Henry Clay of Kentucky. Clay had quickly risen to national prominence before he was elected to the House. He served as Speaker of the Kentucky Legislature and also became a senator when one of the sitting senators from Kentucky resigned.

He was elected to the House in 1810 and was elected as speaker when the House convened in 1811. He was the youngest Speaker of the House at the time, having been elected at the age of 34.

Clay was much more aggressive than his predecessors about giving committee chairs to his political allies. Unlike previous speakers, he took part in floor debates.

He was responsible for increasing the power of the speaker, which was largely facilitated by President James Madison, who was happy to defer to congress on many matters.

Of special note is the speaker elected to the 24th congress in 1835, James Knox Polk, who later became President. He is the only person ever to have served as both Speaker of the House and President of the United States.

The selection of speaker is usually a straightforward affair, with the majority party selecting one of their own.

However, there have been periods where the election of speaker have not been straightforward at all.

As with pretty much everything dealing with national politics in the 1850s, the main issue was slavery.

There was no party in the house that had a majority. The result was 133 ballots to elect a speaker. The eventual winner was Nathaniel Banks who was a member of both the Know Nothing and Free Soil parties.

After the Civil War, the role of speaker became increasingly more political and the office was used to control what legislation came to the floor.

In the late 19th and early 20th centuries, there were a series of strong speakers who shaped the office and used it to promote the agenda of their party.

Until 1911, the speaker had the power to make all appointments to all house standing committees, and the speaker was also the chair of the House Rules Committee. This allowed the speaker to have almost absolute control over what came to the floor.

One of the most powerful speakers was Thomas Brackett Reed of Maine who excelled at using the House rules in the 1890s.

Perhaps the most powerful speaker in the history of the House of Representattives was Joseph Cannon of Illinois who served as speaker from 1903 to 1911. He was considered to have a dictitorial control over the house. He used his power as speaker to keep the Republican party in line by controlling committee appointments.

By 1910, there were growing splits inside the Republican delegation which led to a revolt by the membership of the house. The Republicans were split into the “old guard” which were the majority in the party, and the “progressives” who supported President Theodore Roosevelt.

On March 17, 1910, a legislative revolt took place on the floor of the house. 46 of the progressive Republicans joined with the entire Democrat delegation to vote on rules which took power away from the speaker to appoint members of standing committees.

Many of Cannon’s allies were not present, and the rebels had enough members to have a quorum. There was a point of order filibuster that Canon’s allies initiated which went on for 26 hours, but in the end, his power was dramatical reduced and the speaker was no longer the chair of the rules committee and could no longer make committee assignments.

Since the Cannon revolt, the power of the speaker has ebbed and flowed. Political party structures have become more powerful, and they are responsible for appointing members to committees. It is the party caucuses that determine much of how the house operates.

The longest-serving speaker in house history was Sam Rayburn of Texas, who served three different terms for a total of 17 years. His term as speaker was after the post-Cannon reforms, which put more power in the hands of committee chairs. He had to rule more through persuasion than with an iron fist as his predecessors could.

The election of the speaker, as determined by the house rules, requires a majority of votes cast by name.

Since the founding of congress, there have been 127 elections for Speaker of the House. Only 15 of those have required multiple ballots. 54 men and women have served as speakers of the house since 1789.

Due to the strong nature of party caucuses, the election is usually perfunctory. Each party will nominate someone, and the majority party usually wins.

There have been minor cases of party defections. In 2001, Democrat Representative James Traficant voted for the Republican Dennis Hastert for speaker.

When a new congress sits for the first time every two years, the very first order of business is always the election of a speaker.

The election of a speaker is necessary because the speaker administers the oath of office to all the incoming representatives. Until the issue of the speaker is resolved nothing else can happen.

When the speaker is chosen they are administered the oath of office by the Dean of the House of Representatives.

The Dean is a ceremonial position which is held by whoever is the longest continuously serving member of the house, regardless of party.

While the speaker isn’t as powerful as they were in the past they still have significant powers. The Speaker gets to nominate 9 of the 13 members of the Rules Committee.

They oversee the administration of the house, including the sergeant at arms, clerk, chaplain, parliamentarian, historian, general counsel, and inspector general.

They also, in theory, serve as the actual presiding officer on the floor of the house, managing debates and parliamentary procedures. However, in reality, other representatives often stand in unless it is a very important vote.

They also, of course, sever the role of being the leader of the majority party.

After the election of a speaker, by rule, they are to provide the clerk of the House a confidential list of names who would perform the duties of speaker in the event that the speaker is incapacitated.

Should a speaker die in office, resign, or be removed from office, then the house would just elect a new speaker.

I should also note that there is no constitutional requirement that the speaker actually be a member of Congress. It simply says that congress must select someone to be speaker, but it puts no limits on who.

While the actual management of the House isn’t specified in the constitution and is subject to rules created by congress, there are constitutional roles and duties of the speaker.

So the Speaker of the House is an important position, one of the most important in the federal government. However, over almost 250 years the nature of the position has changed as has the power wielded by the speaker, which is substantially less than it was over a century ago.