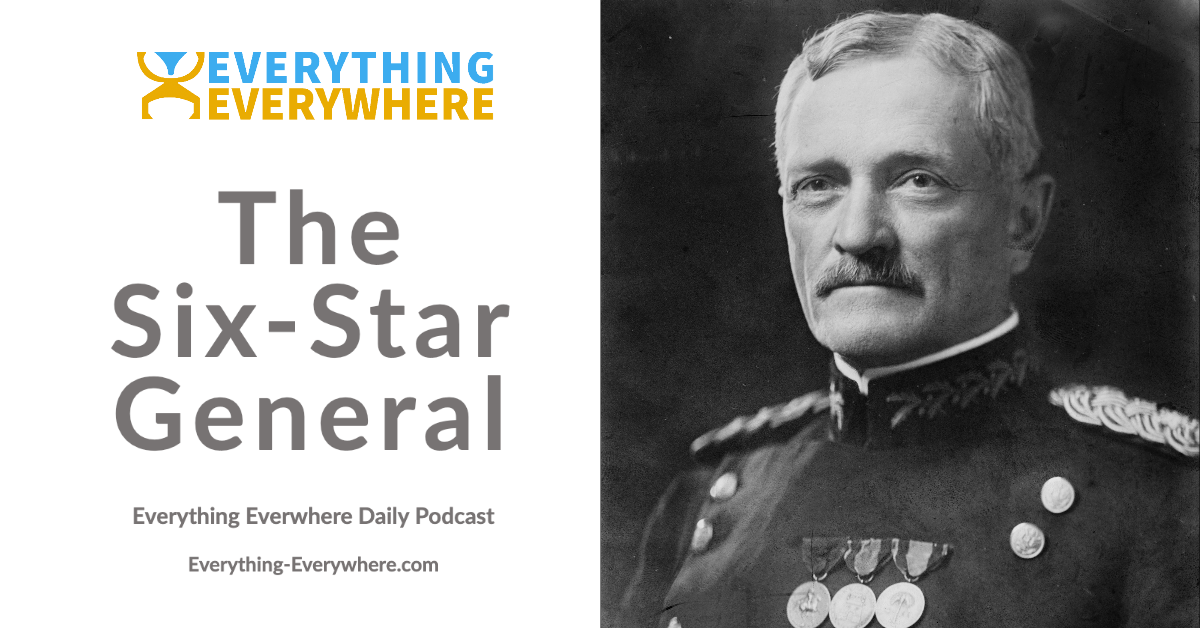 If you look at the list of officer ranks in the United States armed forces, there are 10 ranks listed which are held today They go from Second Lieutenant all the way up to the rank of General, which is the four-star variant of the rank.

There is a rank above general, a five-star general, which hasn’t been awarded in 70 years. Most people are familiar with these generals as having served in WWII.

However, there is still one more rank above that of five-star general in the United States Military.

Find out more about this rank and the two men have been awarded it on this episode of Everything Everywhere Daily.

The upper ranks of the American military have changed over time and according to the military’s needs. For most of the history of the United States, its military has been quite small compared to European countries, and there wasn’t a need for a large and complicated system for organizing the top commanders in the armed forces.

For example, the highest rank ever obtained by Geroge Washington during his lifetime was that of Lieutenant General, which today would be a three-star general. He never attained a higher rank because there wasn’t any.

In fact, after Washington, there were no Lieutenant Generals in the American Army until 1855 when Winfield Scott, the longest-serving soldier in American history, was given a brevet promotion to the rank.

After the Civil War, Congress authorized the newly created rank of General of the Army and awarded it to Ulysses S. Grant.

Here is where I have to start splitting hairs and being nitpicky.

There is a difference between rank and insignia. Today we can say the rank of a general by the number of stars they have, but stars are just the insignia of the rank.

The reason I bring this up is that Grant was the first person in US history to hold the rank of General of the Army, and there was no established insignia for it. Grant used four silver stars to denote his rank.

After Grant, three other men held the rank of General of the Army in the 19th century. William Tecumseh Sherman was appointed to the rank after Grant, and he changed the insignia to two silver stars with an American Eagle between them. The final holder was Philip Sheridan who held the rank briefly before his death.

After the death of Sheridan in 1888, there were no more generals higher than the rank of Major General, aka a two-star general.

At the start of WWI, the US once again created general ranks above two stars, and the system they created is pretty much the one we have today.

Let me give a quick overview as to how General officers in the US military are ranked today:

A Brigadier General is a one-star general.

A Major General is a two-star general.

A Lieutenant General is a three-star general.

A General is a four-star general. (The rank is just called a plain old General.)

These are currently the only four ranks of Generals used in the United States military today, and the only four which were used in WWI.

Tasker H. Bliss and John J. Pershing were both appointed to the four-star rank of General in WWI.

Here is where I have to make note that the WWI rank of General had an insignia of four stars, which was the same as the insignia used by US Grant after the Civil War, but his rank wasn’t the rank of General, but General of the Army.

This is a distinction that will soon become important. Just because their insignia had the same number of stars doesn’t mean they held the same rank.

This four-level system for general officers held until WWII, when we suddenly had a problem.

However, allies like Britain had a rank in their military above that of a four-star general. The rank of Field Marshall.

This put the Americans in an awkward position of having commanders with a lower official rank than the people underneath them.

The solution to this was to create a new rank for the very top level commanders which was on a par with the rank of Field Marshall.

Their solution was to bring back the 19th-century rank held by Grant, Sherman, and Sheridan: General of the Army. The biggest difference is that this time, the insignia of the rank would be five-stars instead of four.

Again, more hair-splitting. The rank of General of the Army remained the same, albeit unfilled since 1888. What happened is that another rank, that of plain old General, was inserted between Lieutenant General and General of the Army, and the new rank was given the insignia of four-stars.

The military also created an equivalent five star rank for the navy, creating the rank of Fleet Admiral.

During WWII, there were four men raised to the rank of General of the Army. They were:

There were also four admirals raised to the of Fleet Admiral.

All eight admirals and generals were advanced in rank one day apart from each other between December 15 to December 21, 1944. They were given their promotions one day apart so there was clear seniority between them.

There was one other person who was given the five-star rank of General of the Army, and that was Omar Bradley in 1950. He received the rank as a political move because he was the Chairman of the Joint Chiefs of Staff during the Korean War, and he would be in the awkward position of having had a higher ranking Douglas MacArthur underneath him.  Since then, no one has been advanced to the rank.

Why didn’t the United States just create the rank of Field Marshall to put it on the same level as other countries? The story which is told is that when the idea of creating a five-star rank was floated, Field Marshall was the original name, but then George Marshall would have been called Field Marshal Marshall, and that didn’t sound dignified, so they just went with General of the Army.

The only real attempt since WWII to revive the rank occurred in the 1990s when Senator Robert Kasten of Wisconsin lobbied to have four-star Generals Norman Schwartzkopf and Colin Powell promoted during the Gulf War. The movement stalled and the promotions were never given.

Likewise, there was an effort to automatically have the Chairman of the Joint Chiefs of Staff elevated to a five-star rank, but that too went nowhere.

The title of this episode is the Six Star General, and you are probably wondering when the sixth star is going to come into play.

Here is where it gets interesting.

This rank was given to then four-star General John Pershing. He created his own insignia, like General Grant in the 19th century, and he selected four gold stars, to distinguish it from the four-star rank of General, which had four silver stars.

When the new five-star ranks were announced in 1944, the Secretary of War Henry Stimson was asked if these new ranks were the same or different than the rank was was given to General Pershing. He said, and I quote:

As Pershing was still alive when the five-star appointment was made, it wasn’t a totally trivial issue.

That means the United States does have a rank on the books, although almost never discussed, above that of the five-star General of the Army.

This isn’t unprecedented in the world. There are some countries which do have a rank above Field Marshall. It is usually called Generalissimo or Grand Marshall. The rank is mostly given by dictators to themselves, or as an honor to some great General.

In 1976, congress decided to posthumously promote George Washington to the rank of General of the Armies of the United States and declared by statute that no one else could ever by higher ranked than Washington.

The only other attempt to elevate someone living to the rank was Douglas MacArthur.

In preparation for the invasion of Japan, MacArthur was going to be given supreme command. As there would be several five-star generals and admirals involved, the idea was floated of promoting MacArthur to the rank of General of the Armies, and explicitly making it a six-star rank, with a six-star insignia.

The idea was dropped a few weeks later after Japan surrendered and his service record notes that the promotion didn’t occur due to the  “lack of necessity for such a rank”.

However, there was a movement to promote MacArthur to the six-star rank for the next 20 years, up to and after his death, however, nothing ever became of it.

After he died there was a movement for a posthumous promotion. The Institute of Hearldy even created a mock-up of a six-star insignia. In the end, the problems of advancing MacArthur above his WWII contemporaries, some of whom were still alive, were too complex and political, so the proposal was dropped.

So yes, there is an equivalent of a six-star general rank on the books in the US Military, but it has only been given to two people in history: John J. Pershing and George Washington, Generals of the Armies of the United States of America.