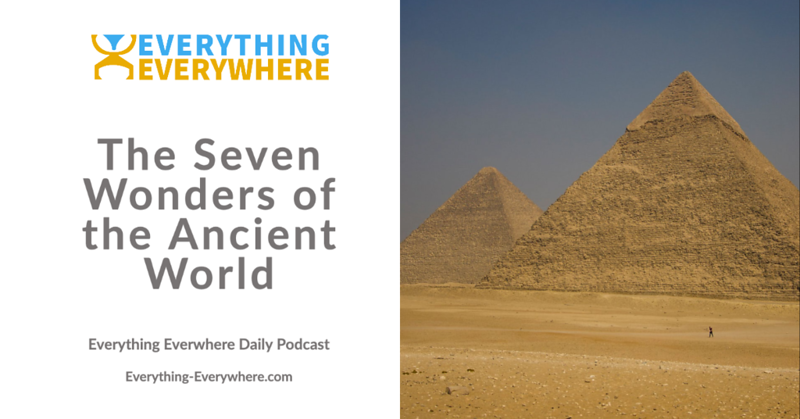 People didn’t travel much in the ancient world. But, for those who did they developed the ancient equivalent of guidebooks. These were often lists of manmade sites and attractions which any traveler should take the time to see.

Over time, one such Greek list was written down and it became known to us as the Seven Wonders of the Ancient World.

Learn more about the Seven wonders, how they were built and how they were destroyed, on this episode of Everything Everywhere Daily.

This episode is sponsored by Audibe.com.

Of all the Ancient Wonders, the one we know the least about is the Hanging Gardens of Babylon. If you want to learn more, the audiobook I’d recommend is The Mystery of the Hanging Garden of Babylon: An Elusive World Wonder Traced  by Stephanie Dalley. She goes through the ancient texts and archeological evidence to piece together the puzzle of this wonder of the world.

The earliest known reference to the Seven Wonders of the World came from Philo of Byzantium in 225 BCE. However, earlier mentions by other authors have been referenced, even though we don’t have the original documents. The Greek historian Herodotus is often attributed with the creation of the Seven Wonders of the Ancient world, who was around 2 centuries before Philo.   There were many other authors who referenced seven ancient wonders including Diodorus Siculus, Antipater of Sidon, and Callimachus of Cyrene.

The Greeks originally used the term theamata which meant “sights”, and that gradually morphed into thaumata which became the words for “wonder”.

Without any further ado, there are the Seven Wonders of The Ancient World, in order of when they were last around.

The Great Pyramid is of course the only one of the remaining wonders which still exists, and it was also the first of the wonders to be created. The pyramids are so old that Queen Cleopatria, the last pharaoh of Egypt, is closer to us in time than she was to the creation of the pyramid.

What many people don’t realize is that the Great Pyramid looked very different than what it does today. The surfaces of the pyramid used to be rather smooth as they were covered in limestone. Most of these cladding stones have been looted, but you can still get an idea of what it looked like near the top, where they were too difficult to take.

The Great Pyramid was the tallest human built structure on Earth for over 3,800 years, until the creation of the spire of the Lincoln Cathedral in England in 1311. In fact, it is still the 13th tallest structure in the nation of Egypt today.

When they created the list of the New 7 Wonders back in 2007, the Egyptians were upset that the pyramids should even be put up to a vote, so it was named an honorary wonder, having been on the original ancient list.

There is a lot to say about the pyramid, and I will save that for a future episode.

The mausoleum was the tomb of the ruler Mausolus, a satrap of the Persian Empire. The name mausoleum comes from Mausolus. In fact, the generic term for an above ground tomb is now mausoleum, which got its name from this wonder of the world.

The tomb was built around the year 350 BC in Halicarnassus, in what is today Bodrum, Turkey. The tomb was a highly ornate structure which looked like an elevated temple.

It lasted until the 12th century, when a series of earthquakes destroyed it over the next several hundred years. Visitors in 1404 reported that only the base of the monument was visible by that time.

The Knights of St John of Rhodes built a castle near the site and used the stones from the ruins of the tomb to build it.

You can still see the ruins of where it once stood today, but there is little beyond broken pillars and stones.

Built during the reign of Ptolemy II Philadelphus from 280–247 BC, the lighthouse cemented the position of Alexandria as the most important city on the Mediterrean.

Originally believed to be at least 100m tall with later reports putting it as high as 162m. It was probably second only to the Great Pyramid in terms of the height of man-made structures.

The lighthouse was built in three tiers. The bottom tier was a large rectangular section, the middle was an octagon, and the top part was circular.

The lighthouse was built on the island of Pharos, which was responsible for many wrecks of ships which came into the port of Alexandria. A fire was lit every night at the top of the lighthouse, with a bronze mirror pointing out to sea to enhance the light.

The Lighthouse of Alexandria lasted far longer than most people realize. As with most of the ancient wonders on this list, it met its demise from earthquakes.  Earthquakes in 796 and 951 did extensive damage, with quakes in 1303 and 1323. Finally, in 1480 the Sultan of Egypt tore down the remaining ruins to build Fort Qaitbay, which sits on the site today.

You can actually see the ruins of the lighthouse if you can SCUBA dive. I did the dive there back in 2009 and I saw the stones which were used in the lighthouse on the sea floor surrounding the island.

Statue of Zeus at Olympia

This was the most important site in the Ancient Greek religion. Mount Olympus was the home of the gods and Zeus was the principal god in the Greek pantheon.

The statue was built by the Greek sculptor Phidias around 435 BC. It was a sitting representation of Zeus made out of ivory and gold, on a throne made of wood.

The statue lasted through the entire pagan era. Eventually the Roman Emperor Theodosius I banned paganism, and the temple fell into disrepair.

The final fate of the statue isn’t known for sure. One legend has that it was disassembled and taken to Constantinople where it was later destroyed in a fire.

Temple of Artemis at Ephesus

It is believed that there were three different versions of the temple, with it having been totally rebuilt twice.

The first temple was built back in the Bronze Age in prehistory. It was eventually destroyed by a flood in the 7th century BC.

The next temple, built in 550 BC,  was the one which was immortalized as a world wonder, was built by King Croesus, who was, according to legend, one of the richest men in the ancient world.

It was famously destroyed by arson by Herostratus, which I detailed in my previous episode on Damnatio Memoriae. Supposedly, it was burned on the day Alexander the Great was born.

The final version was built after the death of Alexander in 323 BC. It survived about 600 years until it was finally destroyed during an invasion of the Goths in 268 CE. The site of the temple was rediscovered in 1869, where excavations showed evidence of all three temples. The site of the temple can be visited today, although there is little to see.

I personally think this would have been the wonder I would have liked to have seen. It was a giant statue of the Greek god Helios built on the harbor of the island of Rhodes.

The statue was built with iron bars inside, and brass plates which made up the exterior. The height was approximately 33 metres or 108 feet, which is about the same size as the Statue of Liberty.

The statue only lasted for 50 years and it was destroyed in an earthquake in  226 BC. Surprisingly, the ruins remained in place for almost 800 years until they were melted down by an invading Arab army. The ruins were a great attraction for years.

The Colossus of Rhodes was the inspiration for a colossus statue of the Emperor Nero in Rome. The location of the colossus was where the colosseum is today, and that is how it got its name.

It was also the inspiration for the Titan of Braavos in the Game of Thrones. Unlike the Titan, the Colossus of Rhodes didn’t straddle the harbor entrance, and ships didn’t sail between its legs.

I saved this one for last for one simple reason: we aren’t really sure if it actually existed. If it did exist, we have no real idea where it was located.

There are no ruins which we can point to, to say “this was the hanging gardens”.  There are also no Bablyonian texts which have been found which ever reference the Hanging Gardens. Moreover, the ancient sources which do mention it, all seem to be second hand accounts. First person accounts of people who visited Babylon, never mentioned it.

If you look at a map of the Ancient Wonders, it isn’t located anywhere near the rest of them, which are all around the Mediterrean. An ancient Greek trader might very well have seen all of the other six wonders, but getting to Babylon would have been way out of their way.

There has been work done to try and pin down a location, most notably by Stephanie Dalley who’s audiobook I recommended up in the ad.

The impact of the number seven and world wonders have continued to this day. There have been many lists created which list seven wonders of engineering, the natural world, and of course the famous New 7 Wonders Competition, which really was nothing more than a big money grab.

There has been talk about rebuilding some of the ancient wonders, in particular the Lighthouse of Alexandria and the Colossus of Rhodes, but nothing had been done to date.