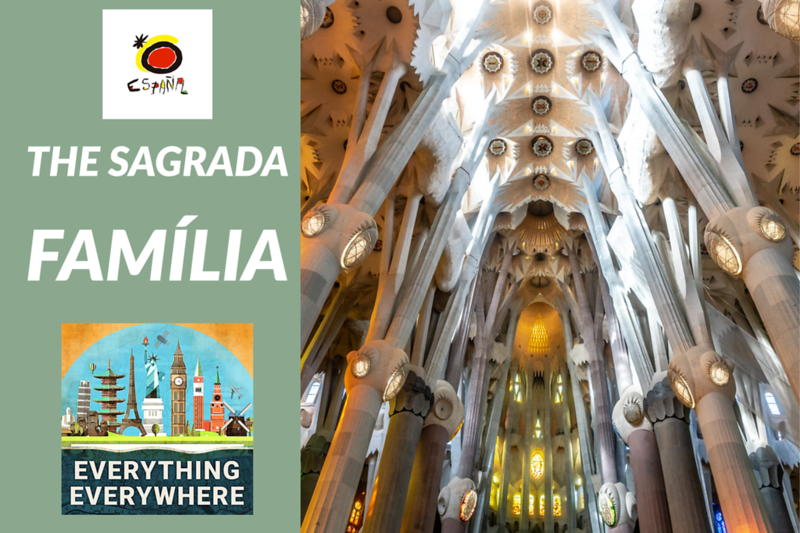 Every year, more than three million visitors will line up and buy a ticket to visit the most popular attraction in all of Spain: The Sagrada Familia. It is a stunning modernist architectural achievement and the crowning design of local architect Antoni Gaudí.

Even though it gets millions of visitors, the church has been under construction for almost 150 years and still isn’t finished.

Learn more about the Basilica of the Holy Family, aka the Sagrada Familia, on this episode of Everything Everywhere Daily.

The Sagrada Familia is undoubtedly one of the architectural wonders of Spain, but it is far from being the only one.

The Frank Gehry designed Guggenheim Museum in Bilbao is a signature example of postmodern architecture.

In Seville, you can find one of the largest cathedrals in the world.

In Granada, you can experience the masterpiece of Moorish Islamic design in the Alhambra.

In Merida, you can see the ancient designs of the Roman Empire.

And just blocks away from the Sagrada Familia you can find the Art Nouveau classic, the Hospital de Sant Pau.

Spain has architecture for every taste.

The genesis of the Sagrada Familia began back in 1872 with a bookkeeper named Josep Maria Bocabella. He took a trip to Italy and became enamored with the basilica of Loreto. He wanted Barcelona to have a great church too.

He began fundraising and in 1882 construction began on the church with a design by architect Francisco de Paula del Villar. The original design was to be a neo-gothic church, pretty similar to what the vast majority of cathedrals in Europe look like.

Only part of the crypt had been completed when in the next year del Villar quit the project. He had disagreements with Bocabella about the direction of the project and decided to quit rather than continue.

Bocabella then offered the job to his advisor  Joan Martorell, who declined. Martorell, however, recommends a local architect for the job, Antoni Gaudí.

When Gaudi took over, the entire design of the church went in a totally different direction.

Born in 1852, Gaudi was only 30 years old when he began work on the church. Gaudi was a practitioner of a style known as Modernisme, which was a unique Catalan take on other modern art movements that were happening around Europe, such as Art Nouveau.

While the Modernisme was found in other arts such as painting and literature, its greatest manifestation was in architecture, and in particular the architecture of Gaudi.

Not only was the style modern, but it was a unique Catalan style and was highly intertwined with Catalan nationalism, which sought to place Catalan culture on a par with the other great cultures of Europe.

When you see the church, it clearly looks nothing like any other church in the world. There design elements which cannot be found on any other gothic style cathedral. Yet, underneath those modern, naturalistic elements you can clearly see that the basic layout of the church is very traditional.

The primary architectural element of the church are the spires. The design calls for 18 large spires. The number represents the 12 apostles, the 4 evangelists, the Virgin Mary, and the largest and central spire represents Jesus Christ.

Inside the church the layout is a typical latin cross with a main aisle and a trancept. The highest point inside is seventy-five metres or 246 feet under the aspe. The columns inside are not like normal columns you see in most buildings. As they approach the ceiling they branch out like a tree, which is what they were intended to look like.

When inside, the thing tha struck me most was the color. Many churches of this size have stained glass windows, but the Sagada Familia, for some reason, has a deeper color projected inside. Each section of window has a particular color, with all the colors of the rainbow represented. If you are there are the right time of day, it is an amazing sight.

There are smaller features of the building which are also rather remarkable and are not usually seen in large, european churches.

The Glory facade will have seven doors. Each door representing the seven sacraments. The eucharist door is currently in place and it is a massive metal door with raised letters which contain the Lord’s Prayer in Catalan.

Just inside the from the door is a stone monument with the Greek letters alpha and omega stylized in the stone.

On the exterior wall near the eucharist door is a four by four square filled with numbers. It is a cryptogram or a magic square. All of the numbers in each row or column add up to 33, which is the age it is believed that Jesus died. In the 16 number grid there are 310 different ways to add up to 33.

There are 2 numbers in the magic square which are repeated, and those supposedly also have significance in that they add up to 48. Over most crucifixes, you will see the letters INRI, which in latin stand for Iesus Nazarenus Rex Iudaeorum (Jesus of Nazareth King of the Jews). If you take the position of each of the four letters in the Roman Alphabet, they also add up to 48.

There is one final remark I’ll make about the design. If you visit the museum which is at the end of any tour through the church, you will find a model of the Sagrada Familia made out of string. What is interesting about it, is that it is upside down. The model is made from handing small weights.

The string and the weights, through gravity, create optimally designed curves and arches. Gaudi would use a mirror or photos to view the model upside down to study it.  I was blown away the first time I saw the model because it makes the entire building make sense once you see how the spires and arches are all naturally occurring.

The best known thing about the Sagrada Familia is probably the length of time it has taken to build it.

Even when construction was first started, the building had developed a reputation for being built slowly.

Gaudi eventually devoted his entire life to the project and ceased taking other architecture clients. When asked why construction was going so slowly, he replied “my client is not in a hurry”. …..and he’s referring to God there.

Gaudi died in 1926 at the age of 73, but the lead architect for the building passed has been on from generation to generation. At the time of Gaudi’s death, the building was about 15-20 percent complete.

The biggest interruption in construction occurred during the Spanish Civil war in the 1930s when construction ceased for several years.

Since then, construction has continued almost uninterrupted. The availability of modern construction equipment and computer modeling has hastened things considerably.

The projected date of completion now is 2026, but the recent pandemic may delay that to 2027.

If it is completed by 2027 it will have taken longer to build than the Great Pyramid or the Great Wall of China.

If you walk around the church, you will notice that there are major differences in the stone on the exterior of the building. The church has taken so long to build, you can see fresh stone not too far from stone which might have been laid over 100 years ago and has been weathered.

The Sagrada Familia is not technically a cathedral. A cathedral is the church which is the seat of a bishop. Likewise, St. Peter’s in Rome is also not a cathedral.

The church was declared a minor basilica in 2010 by Pope Benedict XVI.

Today all funding for the church comes from donations and ticket sales. The estimated annual cost of construction is around €30 million.

If you visit Bareclona, you certainly have to pay a visit to the Sagrada Familia. Yes, it is a very popular and crowded attraction, but it’s popular for a reason. I’d recommend going very early in the morning, or late in the afternoon, so you can experience the best light.

At some point, not too soon, the Sagrada Familia will be complete. That means if you want to be able to say you’ve witnessed the 150 year project while it was under construction, you only have about 6 years left.