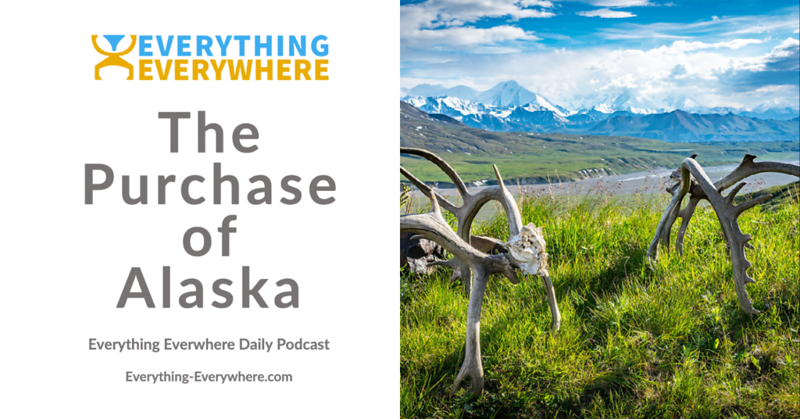 In 1867, United States Secretary of State William Seward signed a treaty with the Empire of Russia to purchase the territory of what would be called Alaska.

The United States purchased it for 2 cents an acre.

At the time it was called one of the worst deals in American History. Today, it is considered the greatest bargain of all-time.

Learn more about the purchase of Alaska on this episode of Everything Everywhere Daily.

My audiobook recommendation for this show is Seward: Lincoln’s Indispensable Man by Walter Stahr

William Henry Seward was one of the most important Americans of the 19th century. Progressive governor of New York and outspoken U.S. senator, he was the odds-on favorite to win the 1860 Republican nomination for president. As secretary of state and Lincoln’s closest adviser during the Civil War, Seward not only managed foreign affairs but had a substantial role in military, political, and personnel matters.

The Russian presence in the Americans dates back to the early 18th century. Traders and merchants who spread across Siberia just kept going when they reached the Pacific Ocean.

If Siberia was distant from the Russian population centers in Europe, then Alaska was really far away. In fact, it earned the nickname Siberia’s Siberia.

Russia’s interest in Alaska was in furs and trapping. The sea otter was of primary interest to the few Russians who bothered to settle. Most of the Russian efforts in the region in the 18th century were never serious.

In 1799 the Russian crown established the Russian-American Company, Russia’s first joint-stock corporation. The company was organized along the lines of other European companies such as the British and Dutch East India Companies.

The Russians mostly stayed close to the coast and didn’t establish any camps or towns in the interior. Their primary goal was to dominate trade in the North Pacific and they set up forts as far away as California and Hawaii.

However, none of these attempts as colonization in the Americas was ever very successful. Due to the sheer distance of Alaska from St. Petersburg, transportation costs were enormous. To get there, they would have to go around most of Europe, cross the Atlantic, go down the length of North and South American, go round Cape Horn, then go back up the entirety of South and North America again.

They also never had many people who actually lived in Alaska. The Russian Orthodox Church did send out missionaries, but even at its peak they probably never had more than 1,000 settlers. Ships could only supply Russian outposts every 2 or 3 years, so they were mostly reliant on trading with Americans and native people.

Nonetheless, for a while at least, it was worth it for Russia just for reasons of nationalism and imperial ambition.

However, things began to change in the mid 19th century.

Russia’s main competitor was the United Kingdom. In Afganistan and South Asia, they constantly vied for power with the British in what was known as the Great Game. In 1856, they suffered a costly and humiliating defeat to the British and the Turks in the Crimean war. They were in need of cash.

They realized that Alaska probably couldn’t be held for long. The Americans were growing in size and power, and it was probably only a matter of time before they set their sights on Alaska. If there were to be a gold rush, something like what California experienced, there would be nothing they could do to hold back an influx of prospectors. They were too far away, and it would cost too much money to defend it.

Moreover, if they were to lose Alaska, they really only had two choices. The Americans, or their nemesis the British who controlled Canada. If the British were to take control of Alaska, then the British would have the perfect location to start to threaten their Pacific coast.

If the Americans were to take control, they could serve as a buffer between Russia and Britain. Moreover, in the 19th Century, American/British relations weren’t as good as they are today as the memory of the War of 1812 was still fresh.

In 1858, the Russian tsar, Alexander II, made the decision to try to sell the territory to the United States. It would serve their strategic goals, and they could make some desperately needed money in the process.

Initial talks between Russia and the United States began with the Buchanan administration, however, the unpopularity of his presidency meant that the negotiations would have to be picked up by the next administration.

Abraham Lincoln was of course elected in 1860, but negotiations again broke down with the onset of the US Civil War. Nonetheless, one of the biggest supporters of purchasing Alaska was the expansionist senator from New York, William Seward who stated,

[S]tanding here, and looking far off into the North-west I see the Russian as he busily occupies himself in establishing seaports and towns and fortifications on the verge of the continent… and I can say, “Go on and build up your outposts all along the coast, up even to the Arctic Ocean; they will yet become the outposts of my own country – monuments of the civilization of the United States in the northwest.”

Not coincidently, William Seward became the next Secretary of State when Abraham Lincoln was elected president.

Seward was a pretty fascinating guy. He, not Lincoln, was the presumptive favorite going into the Republic convention of 1860. In fact, he had way more votes than Lincoln on the first ballot.

However, as interesting as it might be, the story of William Seward will be left for another episode.

With the end of the Civil War and the death of Lincoln, Seward remained the Secretary of State under the new president Andrew Johnson. While Seward was an expansionist, and he was also an abolitionist. Pre-war, he was against the Gadsen Purchase and a possible purchase of Cuba, because they would have been slave states.

With the war over, Seward wanted to go on a buying spree, which not only included Alaska but maybe even Greenland and Iceland too.

Almost immediately after the end of the war, the Tsar ordered his minister to the United States to open up negotiations again with Seward.

By March 1867, negotiations had entered their final stage.

The initial US offer was $5 million, which the Russians rejected as being too low. The final price which was agreed upon was $7.2 million, which ended up being 2 cents an acre. Adjusted for inflation, it would be approximately $133 million today.

Johnson and Seward hoped that the announcement would help offset bad domestic news, and for a while it did. Most of the coverage of the purchase was positive, but some radical Republic newspapers disparaged the purchase calling it “Johnson’s Polar Bear Garden”, a “Russian Fairy Land”, or “Walrussing”. The term “Sewards Folly” didn’t come about until several years later.

Horace Greely, the editor of the New York Tribune, noted that Alaska was “(a) burden…not worth taking as a gift.” One senator joked that the US should only accept it if Seward agreed to live there.

None the less, it easily passed in the Senate on a 32 to 7 vote.

On October 18, 1867, a transfer ceremony was held in Sitka, or what the Russians called New Archangel. Everything went smoothly and peaceably.

The vast majority of Alaskan natives had no clue that any of this had happened. Because the Russians never strayed far beyond the southern coast of Alaska, most people inland had never seen a Russian or even had heard of Russia, let alone that the land which they lived on had now somehow been sold to some other people they had no knowledge of.

After the transfer had taken place, the impeachment and President Johnson and his extreme unpopularity led to problems. The House initially refused to authorize the payment for the territory. It wasn’t until Johnson lost the Democratic nomination and it was clear it wouldn’t have another term, that the funds were authorized.

Afterward, it was found that the Russian envoy to the US, Edouard de Stoeckl, made tens of thousands of dollars of bribes and payments to members of Congress to get approval for the deal.

Of the Russians who were in Alaska, the vast majority of them left. They took up the opportunity to return home, which was paid for by the Russian-American company.

Most of the Americans who moved there also ended up leaving, as there were few economic opportunities in the area.

It wasn’t until the Klondike Gold Rush of 1896, that the fortunes of Alaska changed, and large numbers of people started to flood into the territory.

As for Seward, he traveled to Alaska almost as soon as he retired from Secretary of State where he visited the Territorial capital of Stika.

Today, he is honored in the state with a highway, city, and an annual holiday all named in his honor.