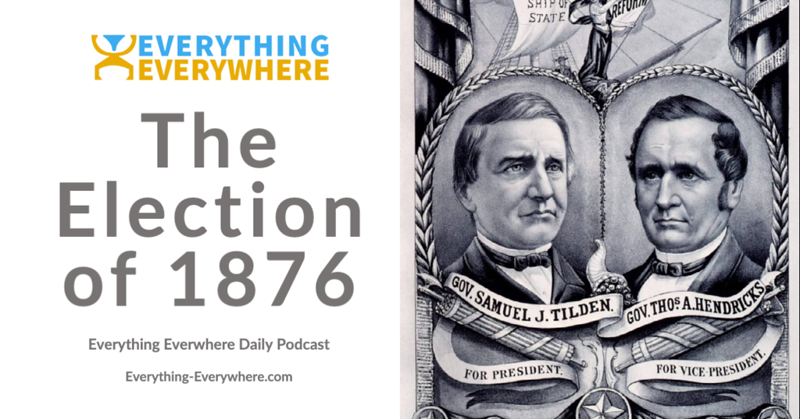 If you think the current American political climate is contentious, then you need to take a step back and take a close look at American history.

The most controversial, divisive, and probably corrupt election in US history was the election of 1876. It’s an event that has been largely forgotten by most Americans today.

Learn more about the election of 1876, and why we never had a President Tilden, on this episode of Everything Everywhere Daily.

If you are interested in American History, or in presidential history, CuriosityStream has several programs that will pique your curiosity. They have programs on several US presidents including Lincoln, Nixon, Truman, both Roosevelts, Kennedy, and many others.

People often have short memories. When they complain of modern-day politics or controversies, they often forget that we did fight a war between ourselves which killed over three-quarters of a million people. It is very difficult to get worse than that.

Moreover, the effects of that war have reverberated for generations, and many still affect us today.

I’ve done two previous episodes on specific presidential elections, and what made them odd.

The first being the election of 1960, in which the outcome was never really in doubt, but the accounting used to calculate the popular vote in Alabama was very odd.

The second being the election of 1824, which had four different candidates from the same party who all won at least 3 states each, leaving no winner in either the electoral college or the popular vote.

Both of those elections were odd, but they didn’t peak the meter in terms of controversy. The rules were followed, even if people didn’t like the outcome.

The election of 1876, however, is another beast entirely. This election, though largely forgotten, laid the foundation for many of the problems which the United States is still dealing with today, and was by far the shadiest and most controversial presidential election in American history.

Let’s start with the backstory of where the country was at. The Civil War was over. The North won and the South lost.

Union troops still occupied some southern states. The 14th Amendment dissolved the legislatures of states in rebellion, prevented anyone who was in the Confederacy from holding federal office and gave freed slaves the right to vote.

The nation had also just completed eight years of the Ulysses S Grant administration, which was one of the most corrupt presidential administrations in American history.

On top of all that, the Panic of 1873 led to an economic depression that was still in play during the election of 1876.

Grant, following the tradition of Washington, decided not to run for a third term. That threw the doors wide open for a replacement.

There were no political primaries back then. All of the debates and campaigning for a presidential nomination took place at part conventions.

At the Republican convention, two-time Ohio Governor Rutherford Birchard Hayes won on the 7th ballot. He was a relative unknown coming into the convention but ended up winning as a compromise candidate. His running mate was New York Representative William Wheeler.

The Democrats selected New York Governor Samuel Tilden by a landslide on the second ballot, after almost clinching the nomination on the first ballot. His running mate was Indiana Governor Thomas Hendricks.

Tilden was a reformer who was responsible for shutting down the Tammany Hall political machine in New York City and throwing its leader, Boss Tweed in jail. The biggest part of his platform was to clean up after the Grant administration like he cleaned up corruption in New York.

In 1876 there were 369 electoral votes up for grabs, which meant you needed to win 185 to become president. This number, 185, more than any other presidential election in history, is going to become really important.

After the election took place, the results were tallied, and this is where the problems began to arise.

The states that voted for Tilden gave him 184 electoral votes. Exactly one less than the number required to win. Hayes had 163 votes at this point.

The problem was with four states in particular, which accounted for the remaining 22 electoral votes.

There was widespread fraud in all three states. Back then, parties would print their own ballots, and many of the Republican printed ballots had the democrat symbol near Republican candidates, tricking illiterate voters to vote Republican.

In all of the states, the Republican-controlled election boards invalidated enough ballots to give the election to Hayes as well as governorships in Louisiana and South Carolina.

In Louisiana and South Carolina, the Democrats went ahead and created their own governments to approve their own slate of electors.

In Oregon, it got really weird.

Hayes clearly won the popular vote in Oregon. There was no evidence of fraud here like there was in the three southern states.

However, the Governor was a democrat, and he declared one of the electors to be illegal because he was an “elected or appointed official”, which is against the law. He was a postmaster and he resigned just before the election so he could serve as an elector.

He just appointed his own elector, a Democrat, to be one of the electors from Oregon, and that one elector would be enough to swing the entire election to Tilden.

On December 6, when the electors assembled to vote in the state capitals, both the Democrats and Republican electors in Florida, South Carolina, and Louisiana voted, and over in Oregon, both the governor’s appointed elector and the original elector, voted.

So, what do you do when even the states themselves can’t figure out what their own election results were?

Congress wasn’t much of a help as the two houses were split. The Senate was controlled by Republicans and the House controlled by Democrats.

They created a body which would sit for the single purpose of resolving the disrupted electoral votes from these three states. They passed the Electoral Commission Act.

The commission would consist of five members from the House (all Democrats), five members of the Senate (all Republicans), and four Supreme Court justices. A fifth Supreme Court justice would also sit, and that one would be chosen by the other four. In total there would be 15 members, and the decisions of the commission could only be overturned by both houses of congress.

The initial plan was that there would be seven republicans and seven democrats with independent justice David Davis being the tiebreaker.

The problem was, Davis had just been elected to the Senate in Illinois by the Democratic state legislature just as the Electoral Commission Act was being passed. The Democrats assumed that they had tied up Davis’s support by giving him the senate seat.

However, it backfired, because Davis recused himself from the commission to take his seat in the Senate.

There were no other independent supreme court justices, which meant they had to select a republican, which gave the Republicans an 8 to 7 majority on the commission.

Over in the rest of the country, people were getting angry. The chant of “Tilden or Blood!” was being raised all over the country. One Kentucky member of congress said that he could raise an army of 100,000 men to march on Washington if Tilden wasn’t elected.

The Electoral Commission met in the Supreme Court in February of 1877 and acted just like a court. They heard the cases from the various states, and the cases were presented by lawyers.

Tilden’s lawyers argued that the commission should look at the decisions made by the state electoral boards. Hayes’ lawyers made the claim that they should just accept state results, as to not violate the sovereignty of the states.

On a straight party-line vote, the committee decided in favor of Hayes.

For each state in question, the committee voted by party, and in each case, they went for Hayes.

That would give Hayes the win in the Electoral College by one vote: 185 to 184.

Because of the terms of the Electoral Commission Act, both houses had to invalidate the results, and the Senate wasn’t going to do that.

The Democratic House began trying to throw everything they could at the wall to stop the process. They made challenges to the votes in Vermont and Wisconsin. They instituted a House filibuster where they entertained tons of motions designed to slow everything down.

What finally resolved everything was the Compromise of 1877.

In the compromise, the Democrats agreed to end the filibuster and allow Hayes to assume the presidency, in exchange for five conditions.

First, all US military forces would be removed from southern states. At this point, the only troops left were in the aforementioned Louisiana, Florida, and South Carolina, but this guaranteed their removed and that a repeat of 1876 wouldn’t happen again.

Second, at least one Democrat would be appointed to the Hayes cabinet. This was done by appointing a Democrat to Postmaster general.

Third, another transcontinental railroad would be constructed, this time in the south.

Fourth, there would be legislation to help industrialize the South.  Parts three and four of this never happened and there was never a serious attempt to make it happen.

Number five was the big one, and it changed the face of the United States for a century.

Five, southern states would have the right to deal with blacks without interference from the federal government.

This basically laid the foundation for Jim Crow laws in the south which wouldn’t be overturned until the 1960s.

Hayes was inaugurated as president without incident. He became a very forgettable one-term president, other than he happens to be a really big deal in Paraguay (listen to my previous episode about that if you haven’t already).

In hindsight, the question you have to ask is who really won?

Sure, the Republicans won the White House, but for what? The Rutherford B. Hayes administration?

The price of the presidency was giving the Democrats the core of what they wanted, especially in the south, and completely undid everything the Republican party had worked for after the Civil War.

Freed blacks in southern states were the staunchest supporters of the Republic Party, and they were all but abandoned. So much of what the United States went through in the 20th and even the 21st century can be tied directly to the decisions made around the election of 1876.

Most American’s today have no clue who Rutherford Hayes or Samuel Tilden were, yet the results of this most contentious election in US history, though mostly forgotten, are with us today.

The executive producer of Everything Everywhere Daily is James Makkala

Today’s listener review comes from Randy IV in the United States. He writes:

Love this podcast and have listened to and enjoyed every episode. Something new and wildly different every day. Episode are short and fun and is now how I start each day. Thanks

Thank you, Randy, and thanks to all of you who listen. Remember, if you leave a five star review over on Apple Podcasts, you can have it read on the show.