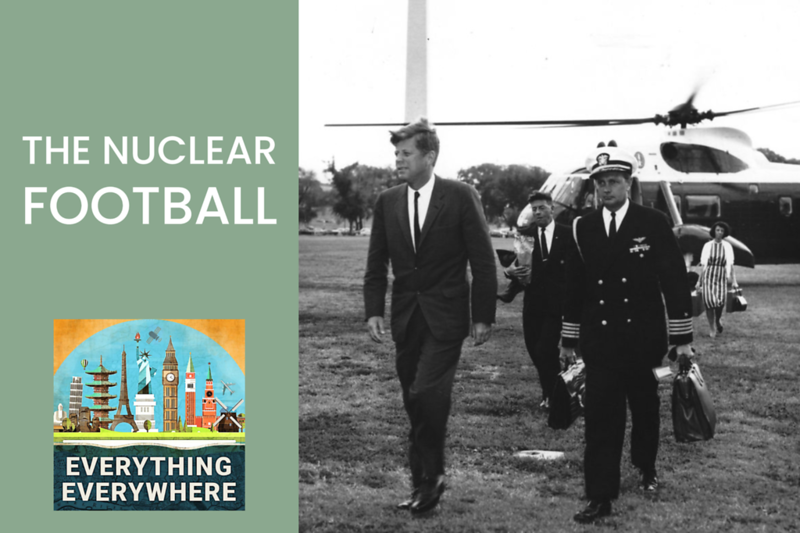 Odds are, if you have ever seen a photo of the president of the United States over the last 60 years, there has been someone in the background or walking a few steps behind, who had in their hand a leather satchel.

In that bag was everything the President would need to start armageddon.

Learn more about the Nuclear Football, what it is, and why it is always around, on this episode of Everything Everywhere Daily.

There was a great deal of debate and discussion about the use of the first atomic bomb over Hiroshima. Then president Harry Truman assented to the use of the bomb.

However, when the second atomic bomb was used over Nagasaki, Truman wasn’t explicitly in the loop. There is a great deal of doubt amongst historians if Truman knew about a second bomb and its use.

The military didn’t usually get explicit presidential permission for every bombing run during the war. Once they had presidential approval for the first use, it was assumed they had permission for subsequent uses. Truman knew that Nagasaki was on the list as a possible target, but he wasn’t notified in advance when it was to happen.

As soon as the second bomb was dropped, Truman asserted control over the United State’s atomic weapons and required explicit Presidential approval for their use.

While the use of atomic weapons remained under presidential control, issues came up regarding accidental use and what would happen if the president was indisposed.

After the Cuban Missile Crisis in 1962, many of these issues came to a head. President Kennedy wanted to know how the decision-making process would work if they needed to launch missiles at a moment’s notice.

Beginning in 1963, with no fanfare or announcement, a man with a leather satchel began shadowing President Kennedy.

This was the origin of the Nuclear Football.

The satchel contained the launch codes for verification information for the president to launch the United States nuclear arsenal.

Since the Kennedy administration, there has been someone within close proximity of the President at every outing holding the Nuclear Football.

Why is it called a football? The name came from an early nuclear response plan called Operation Dropkick. The nickname stuck. The technical name for it is the Presidential Emergency Satchel.

The physical football itself is a hard-sided metal briefcase made by luggage company Zero Halliburton.  There is a leather external covering that covers the briefcase.

The weight of the football is approximately 45 pounds or 20 kilograms.

The exact contents of the football is not publicized for obvious reasons, however, there have been descriptions of the contents from years ago. One of the best accounts dates back to about 40 years ago.

Bill Gulley, former Director of the White House Military Office in the 1970s wrote the following:

There are four things in the Football. The Black Book containing the retaliatory options, a book listing classified site locations, a manila folder with eight or ten pages stapled together giving a description of procedures for the Emergency Broadcast System, and a three-by-five-inch [7.5 × 13 cm] card with authentication codes. The Black Book was about 9 by 12 inches [23 × 30 cm] and had 75 loose-leaf pages printed in black and red. The book with classified site locations was about the same size as the Black Book, and was black. It contained information on sites around the country where the president could be taken in an emergency.

This was the contents of the football 40 years ago and undoubtedly things have changed, but it probably still has the same information in some form.

There has been an antenna spotted protruding from the case, so it is likely there is some sort of radio in the football now.

Most presidents have never really paid too much attention to the actual plans in the football. However, one President, Jimmy Carter, actually really studied the plans and found them to be really complicated. So complicated that it would be useless in a crisis.

Then they simplified the nuclear options to the point where they were allegedly almost a cartoon, or like selecting something off the menu at Denny’s.

The aides who are responsible for holding the football are always a military officer of at least the rank of major, or its equivalent. There are six of them on staff at any given time and they are taken from each of the branches of the military.

The rules regarding the football require that they are always in the presence of the President when the President is out of the White House.

Whenever the President is in a limousine, helicopter, airplane, or even in an elevator, the football has to be there as well.

The football can never be more than a few feet away from the president.

It is believed that there are three copies of the football. One is for the president, one is for the vice-president, and one that is used for the designated-survivor for formal events and/or for the Secretary of Defense.

In addition to the football, there is also a code which is held by the president called the “biscuit”. The biscuit is about the size of a credit card and has to be broken to reveal the code inside.

Likewise, President Clinton one time just flat out lost it. In fact, it might have been lost for over a month before anyone figured out that it was lost.

Jimmy Carter lost his once when his jacket was sent to the dry cleaners.

There have been cases in the past where the president has been separated from the football.

President Nixon was once at a summit when he got into a car with another world leader and left the football behind. He was separated for over 30 minutes.

President Reagan once got into a different elevator from the football, which caused the aide that was carrying it to freak out.

It has never been revealed if the case has ever been opened, but it is believed that may have happened on September 11, 2001. The purpose then wasn’t to launch missiles but to get access to the information about where the President should go during a crisis.

The transfer of codes is one of the major, unseen parts of a presidential transition.

Early in the morning on January 20th, before a new president is inaugurated, they and the incoming Vice-President will have a meeting with military officials who will explain how everything works and the procedures for launching nuclear weapons.

The incoming president is given a set of codes prior to the inauguration. The codes are then activated electronically exactly at noon on January 20th, and the outgoing president’s codes are likewise invalidated.

If the outgoing president and the incoming president are both at the inauguration, then the football is literally handed off to a different aide when the transition takes place. However, this is not done in public.

After 60 years of the Nuclear Football following around the President of the United States, there has been discussion about eliminating the ability of the President to unilaterally use nuclear weapons. The Cold War is long over, and the threat of a surprise first strike is all but abated, and even if such a thing were to happen, the second strike capabilities of the US are still enormous.

Even if that power were to be taken from the president, there will probably always be a presidential football, just so communications and emergency plans are always at hand.