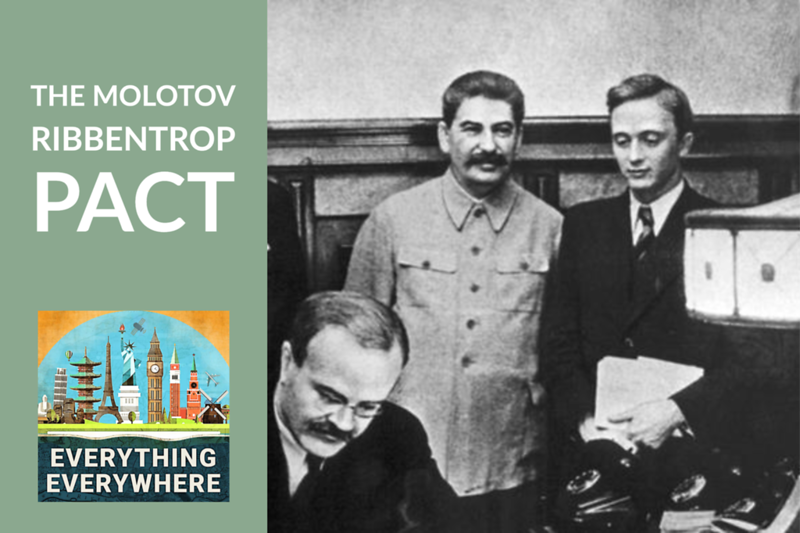 When most people think of World War II, they think of the Allied power of the United States, the United Kingdom, and the Soviet Union, versus the Axis power of Germany, Italy, and Japan.

However, this wasn’t always the case. At the start of the war in Europe, Nazi Germany and the Soviet Union actually coordinated with each other to invade their neighbors.

Learn more about the Ribbentrop-Molotov Pact and how the Nazis and Soviets were allies before they were enemies, on this episode of Everything Everywhere Daily.

This episode is sponsored by Auidble.com

World War II endures in the popular imagination as a heroic struggle between good and evil, with villainous Hitler driving its events, but the Second World War was not Hitler’s war; it was Stalin’s war.

Drawing on ambitious new research in Soviet, European, and US archives, Stalin’s War revolutionizes our understanding of this global conflict by moving its epicenter to the east. Hitler’s genocidal ambition may have helped unleash Armageddon, but as McMeekin shows, the war which emerged in Europe in September 1939 was the one Stalin wanted, not Hitler. So, too, did the Pacific war of 1941-1945 fulfill Stalin’s goal of unleashing a devastating war of attrition between Japan and the “Anglo-Saxon” capitalist powers he viewed as his ultimate adversary.

Historically, relations between Germany and Russia were a mixed bag at best.

They both were European land powers that often butted up against each other in or around Poland.

They were enemies in World War I and each country killed hundreds of thousands of the other’s soldiers.

After the war, each country underwent a radical societal and political transformation. Russia was swept up in a communist revolution, had a civil war, and then settled in with a couple of dictators.

Germany had their economy collapse, had a shaky democracy for a few years, and then fell under the control of the Nazi Party.

In 1926 they signed the Treaty of Berlin where they agreed to remain neutral if either country was attacked.

In the 1930s, the rise of the Nazi party put a strain on the relations of the two countries. The Nazis didn’t think of much of either Slavic people or communists, and the Soviets didn’t think much of the fascists and the Nazi party….and I’m putting that mildly.

In 1936, they fought a sort of cold war against each other during the Spanish Civil War. The Nazis backed the Nationalists and the Soviets backed the Republicans.

1936 also was the year Germany, Italy, and Japan signed the Anti-Comintern Pact, which was originally intended to be an anti-communist pact. The Japanese wanted it to be an anti-Soviet alliance, and that is exactly how the Soviets took it.

In 1939, Britain signed a defense treaty with Poland which began to isolate Germany from the west. Russia always had bad relations with the western capitalist countries.

Early 1939 was a whirlpool of diplomacy. Everyone seemed to know something was going to happen. No one really liked anyone else. And everyone was angling for an alliance. The Soviets wanted an alliance with France to protect themselves against Germany, but they were also talking to Britain as well.

It was in this environment in early 1939 that the German government made discrete overtures to the Soviets. Their argument was that Germany could offer a better deal than the British could.

On March 10, Hitler made a public speech where he basically said just that. On that same day, Stalin made a speech where he alluded that he thought that the western countries were trying to goad Germany into conflict with the Soviets.

The Soviets also knew, due to spies placed in the German embassy in Poland, that Germany was probably going to attack Poland sometime that year.

In April, the Soviets made advances to Germany to indicate that they could live with each other and that they saw no reason for conflict. However, at the same time, they were negotiating with both France and Britain.

In May, Stalin appointed Vyacheslav Molotov as the new Minister of Foreign Affairs and told him he could expand talks to Germany as well as France and Britain. Yes, he is the namesake of the Molotov Cocktail

Hitler eventually slipped the one thing that really got Stalin’s attention. If he invaded Poland, he would be willing to let the Soviets have a piece. Not only could the Soviets get a piece of Poland, but they could get what they really wanted: the Baltic States.

Secret talks continued throughout the summer until they finally agreed to sign a formal treaty.

The Soviets did a complete 180 in preparation for the visit of Ribbentrop. Anti-fascist movies and propaganda were suddenly forbidden. A Soviet band played “Deutschland, Deutschland über Alles” upon Ribbentrop’s arrival at the airport.

Swastika flags were flown alongside hammer and sickles on the street to welcome Ribbentrop.

Ribbentrop went to the Kremlin where he began the final negotiations with Stalin and Molotov.

Hitler had proposed a 100-year non-aggression pact, but Stalin thought that 10-years would be sufficient for now, and 10-years is what they agreed to. They also agreed to remain neutral should either country enter a conflict with another country.

They confirmed the economic agreement which had been hammered out during the previous weeks. Germany would give the Soviets 120 million Reichsmark for the purchase of German industrial goods. They would also loan an additional 200 million reichsmarks over the next seven years.

The Soviets would pay the loan back with interest by sending raw goods to Germany.

These were the terms that the rest of the world knew about.

However, there was also a secret protocol that Ribbentrop and Molotov agreed to. Not only was this not revealed to the public, but the Soviets denied its existence until 1989.

In the secret protocol, both countries agreed to spheres of influence.

Poland was to be divided between the two countries, with Germany getting most of it, and the Soviet Union getting the eastern part that had Ukrainians living there.

The Soviets were also to get Finland, Estonia, Latvia, and Bessarabia, which is mostly modern-day Moldova, but was then part of Romania. In an addendum to the secret protocol a month later, the Soviets also got control of Lithuania. The Soviets had begun the process of occupying Estonia and Lativa several months earlier

While this agreement is often called a non-aggression pact, it was the secret protocol that made it much more. The Germans and the Soviets were working together to divide up Europe.

They were, in a way, de facto allies. They didn’t agree to work together militarily, but they did work together economically and they did jointly partition much of Eastern Europe.

Ribbentrop phoned Hitler several times throughout the negotiations and when they were concluded, Hitler was ecstatic. This was the last piece of the puzzle that he needed before invading Poland.

The news of this leaked fast. It was in major newspapers the next day. To say it shook the world would be an understatement. No one expected these two countries to work together.

The Soviets had still been talking to the French and the British all throughout August and neither country had any clue this would be announced.

Just a week later, on September 1, Germany invaded Poland. Britain and France then declared war on Germany in return, and World War II was underway.

The Soviet occupation of the Baltics and Moldova ended up lasting over 50 years. Today the Baltic countries do not consider their date of independence to be the collapse of the Soviet Union, because they consider that period to only be an occupation.

The Soviets also attempted an invasion of Finland which totally didn’t work. I’m going to save that for a future episode because how the invasion failed is a fascinating story.

By the way, you might be familiar with Soviet foreign minister Molotov’s name from the Molotov Cocktail. The Molotov Cocktail was created in Finland during their resistance to the Soviet invasion, and it was a pejorative term in reference to Molotov’s role in the treaty which allowed the Soviets to invade.

For those of you who don’t know how world war two ended, spoiler alert, Hilter eventually broke the treaty and invaded the Soviet Union 22 months after it was signed.

The Soviets literally kept to the terms of the agreement up until the day of the invasion. There are records of boxcars of Soviet materials crossing into German territory just hours before Germany invaded.

While the Allies had suspicions about the secret pact, they didn’t actually find evidence until they found the documents after the fall of Germany in 1945. As I mentioned before, the Soviets denied it for half a century.

The Ribbentrop-Molotov Pact is over overlooked in history. It messed up the clean narrative of the Axis and the Allies.

Many people say that it was the Soviet Union who really won world war two due to the enormous losses they both inflicted and absorbed.

However, if you count that, I think you also have to put the Ribbentrop-Molotov Pact on the other side of the ledger. The Soviets basically enabled Germany.

If it wasn’t for the secret protocol, Germany might never have been able to invade Poland, and had the second world war happened, it might have played out very differently.

Today’s review comes from listener eeyoremom who writes over on Apple Podcasts:

Always excited to see this daily episode in my feed!

Thank you very much eeyoremon. While you are at it, could you possibly tell pigletmom, poohmom, and tiggermom about the show as well? I think they would like it.

Remember, if you leave a review or send it a question, you too can have it read on the show.