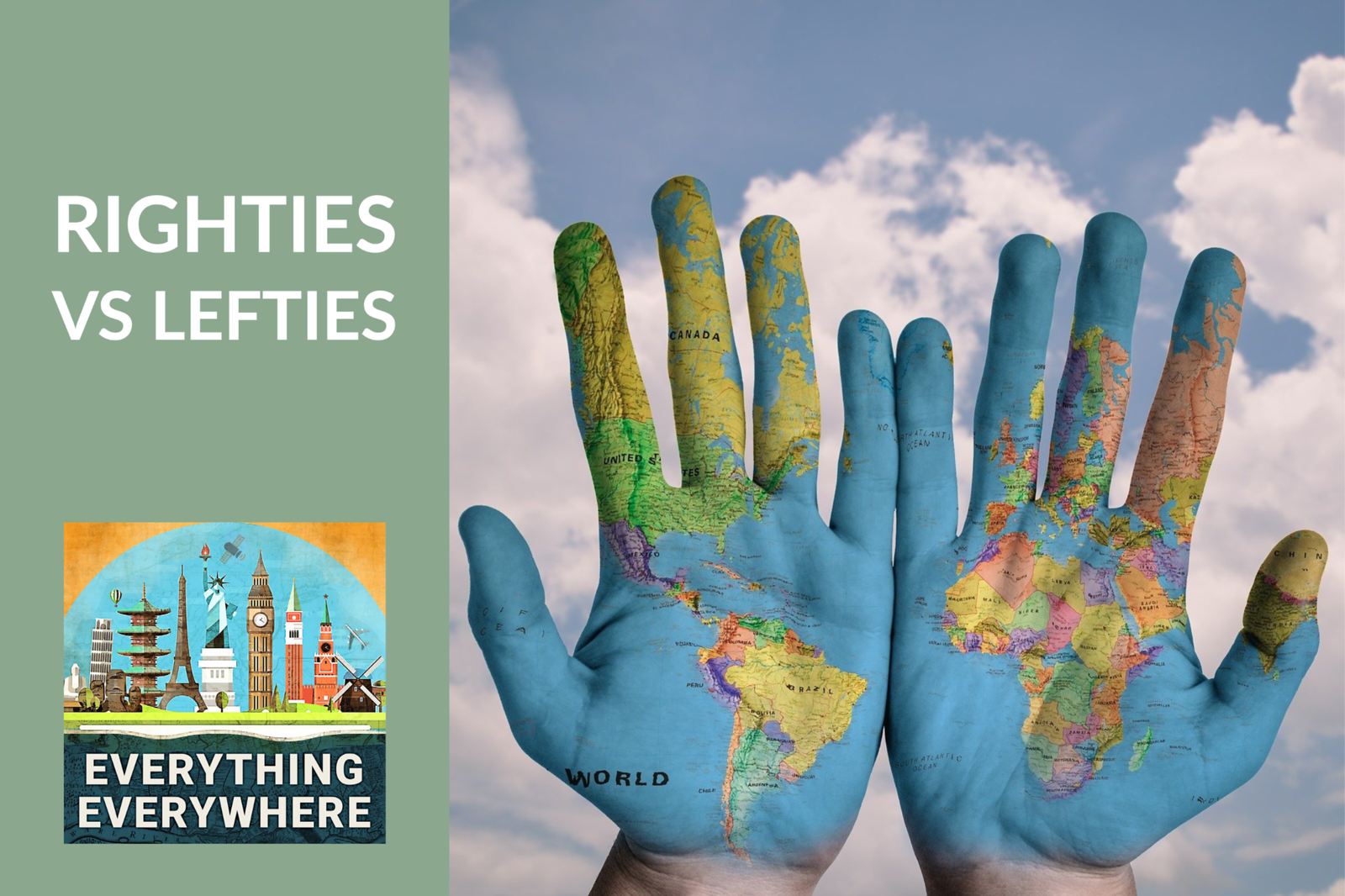 Statistically speaking, about 90% of you listening to my words right now are right-handed. Of the rest of you, almost all of you will be left-handed.

The question of why so many more people are right-handed as opposed to left-handed is one that people have asked for centuries. It is an imbalance that has existed throughout history and across every culture.

Learn more righties and lefties and why the imbalance between them exists, on this episode of Everything Everywhere Daily.

The issue of hand dominance is a really weird one.

If hand dominance was totally random, and there was a 50-50 split in right and left-handed people, that would make sense. It would be like sex selection at conception. Everyone is assigned their sex at conception completely randomly based on genetics.

If hand dominance was 100% that too would make sense. All humans have eyes, ears, noses, and feet. If everyone had the same hand dominance, it would just be a part of being human.

However, neither one of these are the reality we live in. It is neither random nor universal.

The number usually given for the percentage of people who are right-handed is usually given as 90%. The remaining 10% of left-handed people are a minority, but not so small of a minority as to be chalked up to a genetic defect.

FYI, for the purposes of this episode, I’m just going to ignore people who are ambidextrous or mixed-handed. Ambidextrous people can use either hand equally well, and mix-handed people use one hand for something things and their other hand for other things.

These are real things, but their numbers are so statistically small that it isn’t worth constantly bringing up. They are around or under 1% of the population.

Surprisingly, the percentage of the population which is right or left-handed isn’t universally agreed upon. The number that I’m going to use for the purpose of this episode, and the number which comes up most often, is 90%. I’ve seen numbers as high as 95% and as low as 70%, which seems like a very wide range considering it is something that should be rather easy to calculate.

That being said, here is what we do know about handedness.

Also, when full human or human ancestor skeletons are found, the right arm is often slightly larger than the left, indicating it got more use.

Moreover, this right-handed preference seems to be more profound over time. The evidence from human ancestors 1.5 million years ago shows weak support, but 600,000 years ago the evidence is quite abundant.

So, this isn’t a recent development.

Second, the preference for right-handedness seems to be universal for humans. There are no civilizations, tribes, or groups of people that we have ever found that are mostly left-handed.

Take for example ancient warfare. A soldier would have a shield in one hand and a sword or spear in the other. You had to have your shield in your left hand regardless of which hand was dominant because you had to be in a line with other soldiers. Everyone had to line up with swords and shields in the same hand or the formation wouldn’t work.

Thought the 19th and early 20th centuries, if you were left-handed you just had to learn how to use scissors and other tools built for right-handed people. Likewise, most children were just forced to write with their right hand.

By the same token, the Latin word for right is dextra, which is the basis for the English word dextrous. The word for being good at manual manipulation with your hands comes from behind right-handed.

The word “right” also is synonymous with being correct or ethically sound.

The bible talks of being seated at the right hand of God, which is the position of favor.

So, why do we have this imbalance?

The first place to look would obviously be genetics. Since the discovery of DNA and genes, it has given us insight into many parts of what makes us human.

The problem is, no one has found any gene that could be the handedness gene.

Moreover, handedness doesn’t behave like normal recessive or dominant genes. Two left-handed people actually have slightly higher odds of having left-handed children. The odds are 25% instead of 10%, but it still is a minority.

Both of my parents are left-handed, but my brother and I are both right-handed.

If there is a genetic component, it would have to be several genes working in conjunction with each other.

There are many cases of identical twins where one is right-handed and one is left-handed. In fact, it occurs 21% of the time.  Given that they have identical genetics, that should be impossible if genetics were the only cause.

Here I’ll point out that there is a slight difference between the sexes when it comes to being left-handed. Men are about 12% left-handed versus women who are 10% left-handed. It is small, but the difference is real and has been repeatedly found.

No one knows why.

If it isn’t genetic, then it might be cultural. Perhaps it is something that was passed on between early humans which somehow just became a part of us.

This is highly unlikely as well, given that children often develop a hand preference before they can start learning.

If there was a cultural component, then it is likely we would have found some group of people somewhere that was predominantly left-handed, but we haven’t.

The most popular theory right now is that hand dominance is due to the brain. Our brains look symmetrical, but they behave very asymmetrically.

One of the things which happened to early proto-humans between 2 million years ago and 600,000 years ago was the development of language.

Chimpanzees are one of the closest species to humans. They normally show no preference for one side or the other. When they walk upright, however, they can show a preference, but the side they choose is equally distributed.

In fact, no species of simians show any hand preference.

One theory is that the brain may develop a preference in the womb due to some sort of stress, which is why you see once in five identical twins who have different handedness.

The truth of the matter is, no one is really, totally sure why some people are right-handed and some are left-handed.

There is a flip side, however.

They are also significantly overrepresented in professional orchestras, MENSA, and gifted programs. They also tend to score better on tests such as the SAT and LSAT.

There have been eight left-handed US presidents, which is double the rate that would be expected from the general population.

Left-handed athletes also tend to perform better than their right-handed counterparts. This is mostly thought to be due to the fact that people aren’t used to facing left-handed opponents.

This mostly has to do with the fact that how a quarterback throws has implications for the entire team. A quarterback will usually run in the direction they are throwing, which means the offensive line will have to behave differently, to protect a quarterback’s blindside, ie the hand they don’t throw with.

Regardless of why it happens, just make sure to keep your eye on any left-handed people you know. I heard they are all sinister.