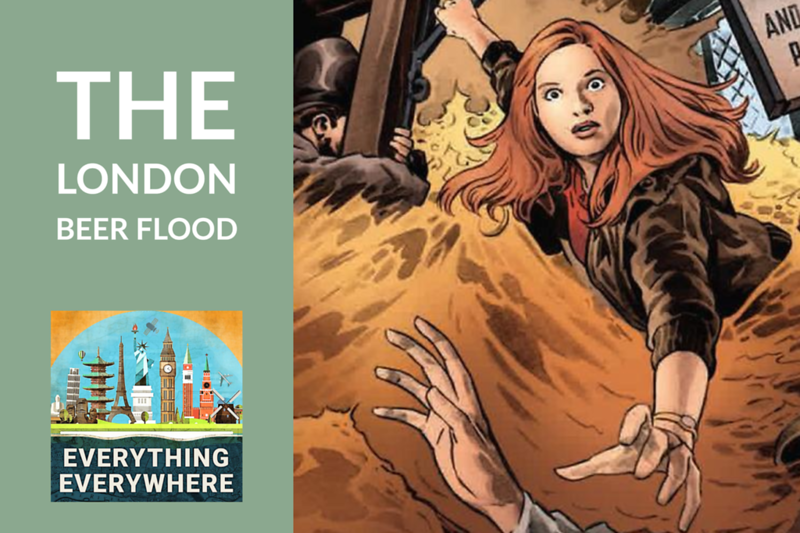 Early 19th century London was a dangerous, dirty, dingy place with tons of poverty and a lot of drinking.

Alcoholism was common and excessive drinking, especially amongst lower-income people in London, was the norm, not the exception.

All of that alcohol had to be produced, which meant lots of breweries and lots of beer.

All of these trends came crashing home on the day of October 17, 1814, in one horrific disaster.

Learn more about the London Beer Flood on this episode of Everything Everywhere Daily.

Believe it or not, beer has been one of humanity’s most important inventions. It was one of the original methods of storing calories from grain, and it was a way for people to safely consume water, as alcohol can act as a disinfectant.

However, these benefits of beer became secondary long ago as the primary reason for brewing beer became the intoxifying effects of alcohol.

This lead to the creation of breweries. Quite a few breweries, in fact, to meet the demands of the largest city in the world.

One of the unique traits of the London breweries of this time was that most of them had enormous vats where they would brew their beer.

Author Ian Hornsey wrote in his book A History of Beer and Brewing:

“It is thought that one of the most spectacular sights, certainly at the major London porter breweries, was the sheer size of the storage vats, much kudos being attached to the brewer in possession of the largest example,”

Basically, these huge vats were marketing gimmicks. People came to see the giant vats and hopefully, that would get them to buy their beer.

Sir Richard Meux was a brewer in London who had the largest vat in the city at the Griffin Brewery.

His son, Sir Henry Meux, went into the brewery business and wanted to follow in his father’s footsteps. When he purchased the Horse Shoe Brewery in 1809, he built a vat that was second only to his fathers.

It was 22 feet high and could hold 18,000 barrels of beer. The vat was built like a giant barrel. It was constructed of wood and was held together by 80 tons of iron hoops.

The Horse Shoe brewery specialized in one and only one type of beer: porter.

The brewery was located next to an area called the St Giles rookery. A rookery is an English term for a slum. The St Giles rookery was one of the worst areas in London in terms of crime and one author called it “a rendezvous of the scum of society”.

One of the foremen at the brewery noticed that one of the metal bands on the aforementioned giant vat had slipped. This wasn’t a frequent occurrence, but it also wasn’t unheard of. The normal procedure was to just address the problem the next day, which is what one of the owners on the premise told him to do.

The vat was unusually full at the time. Moreover, the porter which was in the vat was fermenting, which created gas, which put pressure on the sides of the vat.

About an hour after the loose metal band was reported, at about 4:30 in the afternoon, there was a massive crash.

The vat had burst, and an estimated 300,000 gallons of beer crashed out. The explosion of beer knocked off the stopper on a nearby vat, which caused it to drain in the beer flood.

A fifteen-foot high wave of beer rushed into the St Giles rookery.

The wave hit a mother and her daughter that were having tea.

The wave broke down the wall of the nearby Tavistock Arms pub, crushing one of the workers who was cleaning pots at the time.

Most tragically, a wake was being held in the basement of one of the buildings for a 2-year-old boy who had died the day before. The beer rushed into the basement and filled it, killing four of the mourners including the child’s mother.

In all, 8 people were killed in the beer flood. All of them were women and children, due to the time of day it occurred. No men were in the area because they were at work.

Because it was declared an act of god, the brewery didn’t have to pay any damages to those injured or to the families of those killed in the flood.

The brewery would have probably gone bankrupt if it wasn’t for the fact that they got a refund from the government on the tax they had already paid for all of the beer which they had lost.

In the aftermath of the flood, the trend of breweries building giant vats pretty much ended. Brewing vats turned to concrete instead of wood, which wouldn’t catastrophically collapse like a wooden vat could.

Many of the newspapers at the time began running rumors of people rushing to the flood site with pots and pans to collect the beer. Most of this came from the fact that the victims of the flood were Irish as were most of the residents of St Giles rookery. However, there is no evidence that this actually happened after the accident.

The Horse Shoe Brewery itself was demolished in 1922 and it is now the home to the Dominion Theatre, which hosts West End musicals and plays.

You won’t find any plaques or memorials in the area of the flood. The only thing which honors the event which took place in 1814 is a nearby pub called the Holborn Whippet. Every year on October 17 they serve a special Beer Flood Porter to commemorate the event.