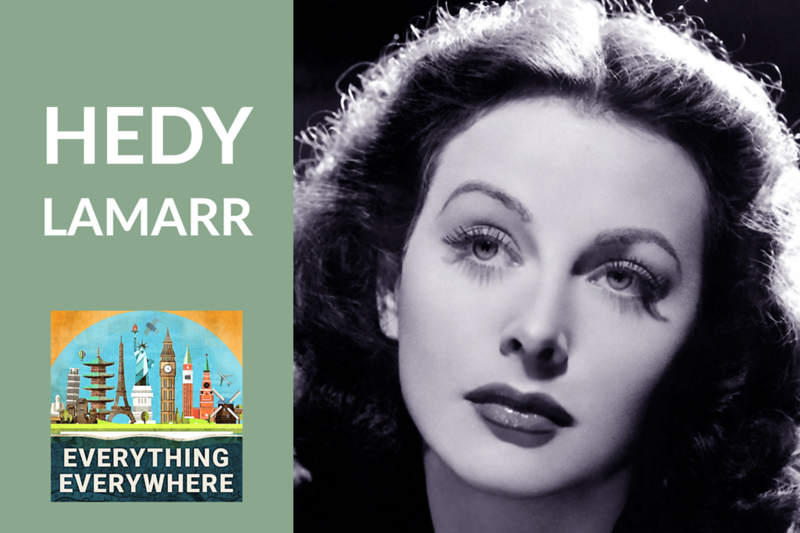 Hedy Lamarr was one of the most beautiful women in the world. She was a Hollywood star who appeared in films with the likes of Clark Gable and Spencer Tracey.

But she was much more than just a pretty face. She was also an inventor who created one of the technologies which have helped develop the modern world. The fruits of her labor can be found in Bluetooth and wifi today.

Learn more about Heddy Lamarr and her invention which helped shape the world on this episode of Everything Everywhere Daily.

The world is slowly starting to open up again, and that means you might be going to more places very soon.

When that time comes, you might want to consider finally getting a Scottevest jacket to help you carry and organize all your stuff.

Just going to a cafe to work for a bit can be made so much easier with Scottevest gear. I can carry a thin laptop computer, a cable, my smartphone, an external battery, and an extra face mask or two, comfortably in my Scottevest pockets.

She was born to an upper-class family. Her mother was a concert pianist and her father was a director at a bank. Both her parents were ethnically Jewish, but her mother had converted to Catholicism and raised her daughter as such.

She showed interest as a child in acting and at the age of 12, she won a local beauty contest. In her private school, she studied ballet and piano.

However, she also has an interest in science and technology which was cultivated by her father. She would go on walks with her father where he would explain to her how various things worked. At the age of 5, she supposedly took apart her music box to discover its inner workings.

At the age of 16, she got a job on a movie set in Vienna as a script supervisor, and she quickly got cast in cameo roles and then speaking parts.

Her big break came in 1933 at the age of 18 when she was cast in the lead role in the movie Ecstasy, where she played a young bride in a loveless marriage.  The movie was famous for its short, artistic nude scenes, which were some of the first in movie history.

Soon after, she was married to Friedrich Mandl, who was an Austrian arms dealer and one of the richest men in Austria. Her parents objected to the marriage as he was associated with Benito Mussolini and Adolf Hitler.

It was not a happy marriage. Mandl was very domineering and wouldn’t let her act. She basically had to play the role of host and accompanied her husband to business meetings with engineers where she always silently paid close attention.

Eventually, the marriage became unbearable. As she noted in her autobiography,

“I knew very soon that I could never be an actress while I was his wife … He was the absolute monarch in his marriage … I was like a doll. I was like a thing, some object of art which had to be guarded—and imprisoned—having no mind, no life of its own.”

So, in 1937, she plotted her escape. At a dinner party, she convinced her husband to let her wear all of her jewelry, and then….she disappeared. She dressed as her maid and fled to London via Paris.

In London, she had the meeting which changed her life. She met Louis B. Mayer, the head of MGM Studios. She wound up on the same ship to New York as him and by the end of the journey, she had a $500 a week contract with MGM.

It was at this point when Mayer convinced her to change her name from Hedwig Kiesler to Hedy Lamarr.

She had a series of high-profile roles opposite some of Hollywood’s leading men.

She starred in Algiers with Charles Boyer.

I Take This Woman and Tortilla Flat with Spencer Tracey.

And Come Live with Me and Ziegfeld Girl with Jimmy Stewart

Despite all of her success in Hollywood, there was another part to Hedy which few people saw.

She became friends with aviator and industrialist Howard Huges. Howard would talk about aircraft design with her, and in return, she provided him some drawing for more aerodynamic plane designs based on shapes found in nature in fish and birds.

Hughes gifted her a workbench where she could tinker and invent things.

In her spare time, she invented a tablet that could be put in water to create a soft drink. She also created an improved traffic light.

The invention for which she is most famous was developed during World War II.

As a European, she was very concerned about what she saw happening and wanted to help. She considered quitting MGM in 1940 and joining the newly created National Inventor’s Council, which was tasked with creating new military technology.

Instead, she worked on a problem that the US Navy had.

The problem was, if you could jam the signal, then the torpedo just became a dumb torpedo and couldn’t be guided.

Hedy came up with an idea that could get around the problem of radio frequency jamming.

This technique is now known as frequency-hopping spread spectrum.

She contacted her friend, composer, and pianist George Antheil, to help her put together a workable implementation.

They applied for and were awarded a patent for their efforts.

The introduction to the patent is as follows:

This invention relates broadly to secret communication systems involving the use of carrier waves of different frequencies, and is especially useful in the remote control of dirigible craft, such as torpedoes.

An object of the invention is to provide a method of secret communication which is relatively simple and reliable in operation, but at the same time is difiicult to discover or decipher.

Briefly, our system as adapted for radio control of a. remote craft, employs a pair of synchronous records, one at the transmitting station and one at the receiving station, which change the tuning of the transmitting and receiving apparatus from time to time, so that without knowledge of the records an enemy would be unable to determine at what frequency a controlling impulse would be sent

The navy flagged the patent as classified but otherwise sat on it for the rest of the war.

They weren’t very trusting of ideas that came from civilians, and moreover, the implementation of the system outlined in the patent was just too difficult.

The idea wasn’t dead, however. It was just ahead of its time. In the 1950s the Navy began working on prototypes, and in 1962 the technology was implemented on Navy ships.

The use of frequency hopping spread spectrum has been used in military communications, as well as in wifi, cellular technology, and Bluetooth. It is very probable that many of you are listing to me over some implementation of this idea which was first hatched by Hedy Lamarr.

As for Hedy, she continued her acting career into the 1950s. Her biggest film was probably Samson and Delilah opposite Victor Mature in 1949.

She retired from acting in 1958 and received a star on the Hollywood Walk of Fame.

She never received a dime from her invention, and for years was never even given credit.

It wasn’t until the late 1990s that her contribution was even recognized.

In 1997, she and George Antheil were jointly honored with the Electronic Frontier Foundation’s Pioneer Award.

The same year she also became the first woman to receive the Invention Convention’s BULBIE Gnass Spirit of Achievement Award, which is also known as the “Oscar Award of inventing”.

Hedy spent the last years of her life in seclusion living in Florida. She seldom saw anyone, including her own children, and only communicated by telephone.

She sued Warner Brothers in the 1970s for $10 million dollars for the use of a character in the movie Blazing Saddles called Headly Lamarr. They settled out of court and Mel Brooks apologized for “almost using her name” and noted that “she didn’t get the joke”.

She probably still holds the distinction of being not only one of the most glamorous leading ladies in Hollywood history but also perhaps the most intelligent.