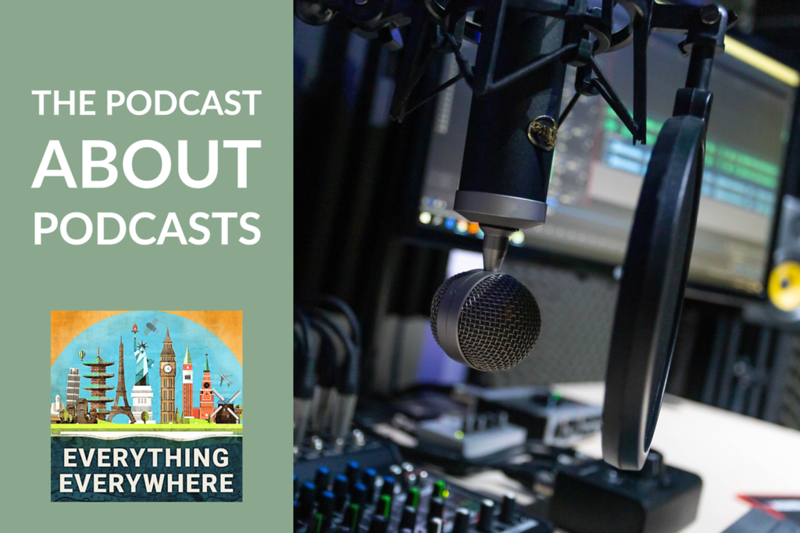 I’m a podcaster who makes podcasts. You are a podcast listener who listens to podcasts.

Learn more about podcasts on this episode of the Everything Everywhere Daily….Podcast.

I’ve mentioned before about how Skillshare has videos to cover almost any subject you’d wish to learn.

Well, if you are interested in launching your own podcast, Skillshare can help you out there as well. They have videos on every aspect of podcasting, from how to pick a microphone, to how to get everything set up on the back end, to how to editing on your shows.

Believe it or not, the history of digital audio goes back to before the advent of computers.

If you think of a sound wave as something like a sine wave or the squiggly line that you see on an oscilloscope, the method of making that digital was developed way back in 1937. The technique, called Pulse-code modulation, basically involved breaking up the wave into individual parts and representing each part digitally.

Digital audio recording began being used on a regular basis in the 1970s and it was finally used in commercial audio with the release of the Compact Disk format in the early 1980s.

None of this has anything to do with podcasts, however.

Digital audio can take up a lot of space and the file sizes can be quite large.

With the rise of the internet in the 1990s, it was possible to deliver any manner of digital files over a computer network. However, sending large audio files was not practical.

A CD could store about 700 megabits of data. The music on a CD was uncompressed and trying to send 700 megabits over a 9600 baud modem was a time-consuming prospect, to say the least.

Work on compressing digital audio files to make them smaller was begun before we had a thing called the world wide web.

Moving Pictures Experts Group, known as MPEG, is a part of the International Standards Organization, or ISO. They set standards for media encoding.

The end result of their efforts was the MPEG-1 Audio Layer III, or as we know it, MP3.

There is a whole lot about the MP3 format and how it came about, but it’s a very long story and not really relevant to this episode, so I’ll leave it for a later day. I will point out that the song they used to really work out the kinks in the format was Tom’s Diner by Susanne Vega.

Suffice it to say, the MP3 format was able to compress digital audio files anywhere from 75 to 95%. It became the most popular audio format on the Internet in the 1990s and it still remains so today. There are many other audio formats out there, but they really aren’t central to the story of podcasting. As proof, I offer the fact that these words you are hearing right now are being delivered on an MP3 file.

MP3 became the format for digitizing music and MP3 players became popular. The most successful and popular MP3 player was released by Apple in 2001, the iPod.

Around the release of the iPod in the late 90s and early 2000s there developed the trend of weblogs, also known as blogs. Some people began taking the blogging concept and adapting it to audio. It was known as audio blogging.

The term podcasting was first used in February 2004 by Ben Hammersley, who was a journalist for the British newspaper The Guardian.

The term was eventually picked up by former MTV VJ Adam Curry who popularized the term. Curry has subsequently been named the godfather of podcasting, or the Podfather.

The term podcast is what is known as a portmanteau, which is when two words are combined to create a new word. In this case, it is a combination of iPod and broadcast.

The term iPod was created by Vinnie Chieco, who was a freelance copywriter working for Apple. When he saw the first prototype device, it reminded him of the small pods from the movie 2001: A Space Odyssey.

The white color of the player and the circular interface looked like the pod bay doors on the ship in the movie: Discovery One. Likewise, the pods were smaller extensions of the main ship, just like the iPod would be an extension of a computer that managed the files on the device.

The term broadcast obviously refers to a widespread message sent over an electronic medium like radio or television. However, the original meaning of broadcast came from agriculture. To cast means to throw. Broadcasting was throwing seeds by hand over a wide area.

Downloading an audio file from the internet does not quite a podcast make. There is one other thing that has made podcasting into what it is today: RSS.

An RSS file is a text file that is designed to be read by applications or devices. It is a single file that is updated whenever the site it is tied to is updated.

The RSS file sits at a URL just like a webpage. When you subscribe to a podcast, your podcatcher, or podcast app, will store that URL and periodically check it to see if it has been updated.

Your podcatcher might automatically check several times a day, or you might be able to manually updated it. That file will then have a URL that will direct the application to where it can find the audio file to download.

So to put it all together in the case of this show, after I record it, I’ll upload an MP3 file to my podcast hosting site.

Once the audio file is uploaded, along with other descriptive information about the episode, the RSS file for my podcast will be updated as well.

Your podcast listening application, which might be Apple Podcasts, Google Podcasts, Podcast Republic, Podcast Addict, Spotify, or many others, will at some point check my RSS file if you are following my podcast.

When the application sees that the RSS file was updated, it will then download the audio file for the latest episode where you can listen to it at your leisure.

Despite the fact that only a few companies have the apps which most people use, podcasting is decentralized. You might listen to 10 podcasts, and all 10 might be hosted by separate companies. There is no one company that controls podcasting.

There are currently over 2.2 million podcasts according to PodcastIndex.org, which is trying to be the most comprehensive list of podcasts.

There are a small number of shows which get the vast majority of listens. Over half of all podcasts don’t get more than 26 downloads, 7 days after release.

The top 1% of podcasts get over 3,000 downloads per episode at least 7 days from release.

Podcasting has basically been growing every year for the last 15 years.

Currently, 28% of all Americans are weekly podcast listeners and 62% listen to some form of online audio every week.

So if you are driving in your car or out walking your dog and you are enjoying a podcast, take a second to appreciate the history behind this phenomenon and the global online ecosystem which is podcasting.