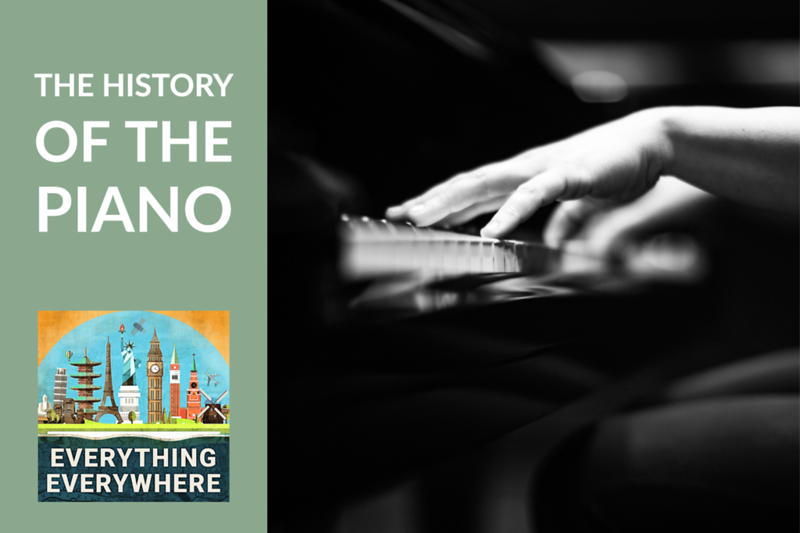 It is an instrument that we are all familiar with, even if we don’t know how to play it. It is one of the most commonly played instruments in the world, yet its origins are rather recent.

Its direct ancestor an instrument that most people don’t realize and it has significant differences from other instruments which look very similar.

Learn more about the piano, also known as the pianoforte. How it works and how it was invented, on this episode of Everything Everywhere Daily.

Before we get into the specifics, it is necessary to know exactly how and why it came about.

The first known instrument to use a keyboard was the water organ, which was popular in ancient Greece and Rome. It was an early organ that used water to push air through pipes. It would require one or two people to pump the water while the musician played.

I think there is an interesting future episode on ancient musical instruments, but for the purposes of this episode, the main thing to note is that the water organ was the first instrument to use a keyboard.

A keyboard is just an input device. There are actually wind, string, and percussion instruments that all use a keyboard. Similar to how a typing keyboard can be used for both an analog typewriter and a computer.

The ancient water organ, just like its successor instrument the pipe organ, is a wind instrument.

The next big step towards the piano came with the creation of the harpsichord.

The earliest known reference to the harpsichord was in 1397 and the inventor was claimed to be a German by the name of Hermann Poll.

The harpsichord became the most popular keyboard instrument during the late middle ages and the Renaissance. It didn’t require a massive installation like a pipe organ and it could easily fit in a room and be carried by two or three people.

Like a piano, the harpsichord is a string instrument. The secret to a harpsichord can be found in its name: harp. When the keys on a harpsichord are pressed, it lifts up an element inside called a jack. The jack sits on the side of the string which is to be played.

Extruding directly outward from the jack is a tiny thing called a plectrum. In early harpsichords, the plectrum was made from the quill of a bird feather. Today they would be made out of plastic. The plectrum would pluck the string when the jack is lifted, which is what made a sound.

A plectrum is also a generic word for anything used to strum a stringed instrument, so a guitar pick would be a plectrum.

There is also a dampener that rests on the string when the key is not being pressed which prevents the string from being vibrated when it wasn’t wanted.

The sound which comes from a harpsichord is more tinny than what you would hear from a piano. It does in fact sound more like a harp.

There is one major drawback to the harpsichord. No matter how hard or soft you press a key, the sound is the same. Once the string is plucked, it’s plucked.

Around the same time, another string keyboard instrument was created called the clavichord. The clavichord was much smaller and more compact than a harpsichord.

If you looked inside, you’d find a stringed instrument with a resonance box, just like with a guitar or a violin.

The way it works is that pressing a key would cause a metallic blade to rise up striking the string. Unlike a harpsichord, there wasn’t a string devoted to every key.

There were two major problems with the clavichord. The first is that it just wasn’t very loud. If you remember back to my episodes on how orchestras work, the reason why there are so many string instruments in an orchestra is simply a matter of volume. You couldn’t really play the clavichord for a large audience.

The second problem was that because some keys used the same string, you couldn’t use those keys at the same time. This made it much more difficult to play than a harpsichord.

The creation of the piano was designed to fix the problems of both the harpsichord and the clavichord.

The word piano is just short for the Italian word pianoforte, or alternatively known as the fortepiano. It comes from the phrase clavicembalo col piano e forte. Clavi means keys, cembalo is the Italian word for a harpsichord, piano basically means quiet and forte means loud.

The ability to make sounds of various volumes was the primary difference between a piano and a harpsichord.

I should note that while the word “piano” is just short for pianoforte, today the term pianoforte is usually reserved for early 18th century pianos.

The invention of the pianoforte is credited to Bartolomeo Cristofori who was an instrument maker in Padua, Italy. We don’t know the exact date he created the first pianoforte, but it is usually given as around the year 1700.

The primary innovation of the pianoforte was to have keys hammer the strings, rather than to pluck them like in a harpsichord. By hammering the string, unlike a harpsichord, you can vary the volume of the sound depending on how hard you press the keys.

To this extent, the real predecessor of the piano isn’t the harpsichord, it would be the hammered dulcimer. An instrument where you use small mallets to hit strings.

However, you can’t just hammer the keys. If you press a key on a piano and hold it down, it will continue to make a sound. If all pressing a key did was hammer a string, it would dampen the sound unless the hammer was quickly lifted from the string.

So the real innovation of Bartolomeo Cristofori was creating what is known as the action of the piano key, which lifts the damper on the string, brings the hammer down, and then lifts the hammer as soon as it strikes the string.

Cristofori. They are located at the Metropolitan Museum of Art in New York, the National Museum of Rome, and the Musical Instrument Museum of Leipzig.

The oldest of these is at the Met and there are videos online of it being played. It sounds like a cross between a modern piano and a harpsichord.

Other than the hammer mechanism, the construction of these early pianofortes was very similar to harpsicords.

The next big innovation in the piano was the addition of the sustain pedal. This was created by the German Gottfried Silbermann. The pedal lifts all of the dampers on the strings to allow for sustained notes.

The range of pianos gradually increased over time. The piano used by Mozart only had a five-octave range and Beethoven wrote for a piano with about a six-octave range. Also, some of the pianos from this period had the black and white keys reversed.

So, believe it or not, the piano works of Mozart, Beethoven, and Bach were not written for modern pianos.  There are actually people who make replicas of pianofortes for concerts where period-accurate instruments are used.

There were many small innovations to the piano through the 19th century. More pedals were added, with three on higher-end pianos. They became larger and heavier, often with a metal frame, unlike a harpsichord or pianoforte. The stronger, metallic frame allows a piano to support higher tension on strings, which can sometimes reach up to 20 tons on modern pianos.

More strings were added for each note and today a modern piano will have between two to four strings for each note that is played.

The 88 keys on a modern piano were established in 1880 by the Steinway Company, giving pianos a seven and a half octave range. The vast majority of pianos have 88 keys, but not all of them do. In 2018, the Australian company Stuart and Sons released a piano with 108 keys and a full nine-octave range.

Pianos also come in different forms. An upright piano is a type you might see in a saloon in the old west. They have a more compact form and they are much easier to transport.

A full concert grand piano might be 9 feet long and a baby grand might be five feet long.

Of course, like everything else, pianos have become digitized. Yamaha introduced the disklavier in 1987. It was a full acoustic piano, however, it had electronic sensors which could accurately record everything the musician did, including the keys, hammers, and pedals. Likewise, it could also acoustically play digitally recorded music, just like an old player piano could.

I am going to close with one final thing. I mentioned before that a keyboard is just an interface for making sounds. An organ is a wind instrument and a piano is a string instrument.

That raises the question, is there a percussion instrument that uses a keyboard?

The answer is, yes. It is called a Celesta or Celeste. It works very similarly to a piano, except instead of hitting strings, the hammers hit metal bars. It gives it a sound very similar to a glockenspiel or a xylophone.

You have probably heard a celesta even if you didn’t know it. The most famous work composed for the celesta is Dance of the Sugar Plum Faries by Tchaikovsky.

Likewise, it is the primary instrument in the theme of the Harry Potter Movies, and the theme music to Mister Rodgers Neighborhood.

Today, the piano is one of, if not the most popular instrument in the world to play, despite only finding its modern form in the late 19th century. It can be played by amateurs who can barely read music, and some people can also spend a lifetime mastering it.

It is all due to a 16th-century Italian instrument maker who just wanted to make a better harpsichord.

Today’s review comes from listener Mike Breytenbach over at PodcastAddict. He writes:

Thanks, Mike! As I like to tell people, it is all about learning about stuff you didn’t even know that you didn’t know.