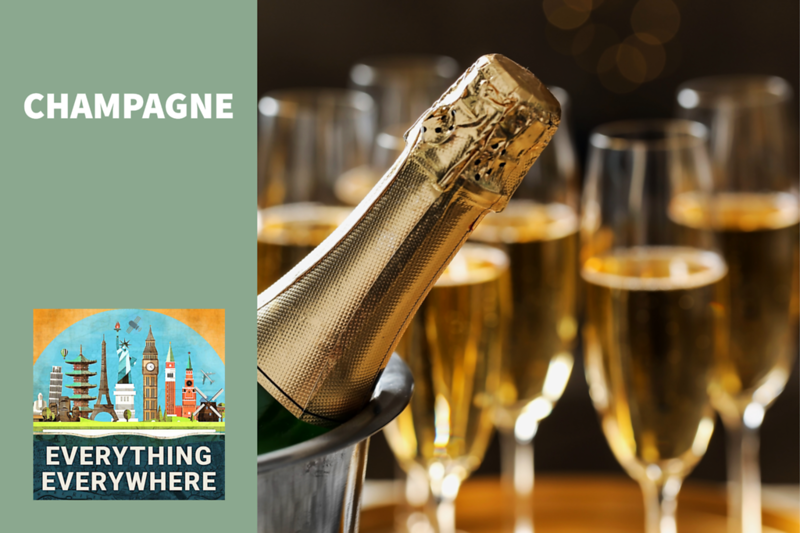 Located in Northern France is one of the most well-known wine-producing regions on Earth. In fact, it is so well known that it has legally protected the name of its signature product around the world.

It is the preferred drink for both royalty and rappers, and you will find it at nightclubs and brunches, yet its discovery was believed to be an accident.

An accident that is today a $6 billion dollar industry.

Learn more about champagne, how it was created, and its place in the world today on this episode of Everything Everywhere Daily.

Wine has been produced around the Mediterranean for thousands of years. However, it probably didn’t reach Northern France until about the 5th century.

The wine which was grown at this time was just wine, not radically different from the wine you’d see grown in other regions. By all accounts, the wine originally produced in the Champagne region of France was a light, fruity wine, in contrast to the darker, heavier wines found in Italy.

Perhaps more importantly for the winemakers in Champagne, their wines weren’t considered as high quality as the wines in the neighboring region of Burgundy.

The main city in the Champagne region is Reims, or as it is often pronounced in English, Reemes.

For centuries, the wine of Champagne was overshadowed by Burgundy. They eventually tried to shift production to white wines to differentiate themselves from Burgundy, but that didn’t work. It wasn’t a bad idea given how far north Champagne is, but it just didn’t pan out.

Eventually, in the 16th and 17 centuries, they stumbled upon the idea of producing a white wine from red grapes.

The initial results tasted fine, but they had a grey or pink hue, making them rather unpopular.

Most of the vineyards at the time were actually owned by monasteries because of the need for sacramental wine and because they owned a lot of land.

One of the monks who worked at the Benedictine monastery of Hautvillers was an especially good winemaker and took the science of winemaking quite seriously. He has a name you’ve probably heard of before: Dom Perignon.

Dom Perignon figured out how to clarify the white wines, which were made out of red grapes.  He focused on the cultivation of Pinot noir and was considered to be a perfectionist by the other monks. Today, the primary grapes used for champagne are Pinot noir, Pinot Meunier, and Chardonnay.

He actually figured out a whole host of techniques that improved wine production, including how to prune the vines, and how and when to press the grapes.

However, there was still a problem with the wine production in the region.

Because it was further north than most vineyards, it would be colder in the winter and get colder faster in the autumn. The lower temperatures would stop the fermentation process, which would result in undigested yeasts and sugars in the wine.

These sugars would form carbon dioxide gas in the spring when the yeast reactivated and would cause the bottles to literally explode. The exploding bottles would often cause nearby bottles to explode as well, which resulted in a disastrous chain reaction.

The bottles that didn’t explode would often have bubbles and would be very effervescent.

The bubbles in the wine were considered a flaw in the product and something to be eliminated. Bubbly wine became known as le vin du diable or “the devil’s wine.”

Beginning around the mid-17th century, the non-bubbly wine of the Champagne region began being very popular in England. A French writer by the name of Charles de Saint-Évremond was exiled to England, where he became a hit on the elite social scene, and he was a huge promoter of wines from Champagne.

When wines were shipped from Champagne to England, some of them would occasionally be the unwanted bubbly variety.

It turned out that the English loved it.

A whole bunch of innovations took place about the same time in the 17th century, which made the drink we know as champagne possible.

The first was a paper published in 1662 by the scientist Christopher Merret. He actually figured out why wine sparkled and how to make it happen on purpose. He realized that if you put sugar into any wine before it began to ferment, it would wind up sparkling.

Most of the non-sparkling wine imported from Champagne was actually delivered in casks and then rebottled once it got to England. Many of the English merchants began making the wine sparkle themselves, which led to the very odd historical fact that the first purposely created sparkling wines from the Champagne region were actually created in England.

The next big innovation was in the area of glass making. Mid-17th century England was in the very beginnings of the industrial revolution. One of the early innovations in England was the ability to make stronger bottles.  The English were using coal in their glass making versus French wood-fired glassmaking, which allowed for higher temperatures. These new thicker bottles were resistant to exploding and were critical to selling sparkling wine.

According to legend, Dom Perignon himself rediscovered the use of tree bark from the cork tree to stop bottles. Some people dispute the legend, but either way, it was during this time that corks came into use.

With Champagne becoming so popular in England, it soon began to spread in popularity with other royal courts in Europe.

At the beginning of the 18th century, it began to gain popularity among the French elite. The French regent, the Duke of Orléans, began serving champagne at his parties in Paris, which caused it to gain in popularity with the French nobility.

The rise in French popularity of sparkling wine in the early 18th century resulted in many of the winemakers of the Champagne region shifting their production from traditional wine to sparkling wine.

Houses like Moët & Chandon and Taittinger were all established during this period in the early 1700s.

There were further improvements made in champagne production.

One problem was sediment which collected at the bottom of bottles. Normally, the champagne would just be decanted into a new container, which works just fine with most wines, With champagne, however, if you did that, it would lose its effervescence.

One is the champagne flute, which is a very long and slender glass. The theory is that it has a very small exposed surface area at the top to prevent bubbles from escaping. However, it also doesn’t allow the wine to be swirled and the aroma to escape.

The other is a very wide and shallow glass, which is pretty much the opposite of a flute, known as a champagne coupe. This is the choice of many wine afficenadeos

Coupe glasses can be stacked into a tower for some special events. The tower should be stacked such that there is only one glass at the top that the champagne is poured into. The champagne will then overflow and fill all of the glasses below it.

The world’s largest champagne glass tower was built in January 2022 in Dubai. It was a pyramid that consisted of 54,740 glasses and stood  8.23 meters or 27 feet tall.

One tradition which is done on formal occasions is opening a bottle of champagne with a sword or a saber, known as a sabrage. It involves swinging a saber such that it would catch the glass lip near the top of the bottle and take off the glass, and cork in one fell swoop….if done correctly.

The traditions supposedly developed when Napoleon’s troops were marching back in victory, and people threw them bottles of champagne in celebration. As it was hard to open on a horse, they just used their sabers.

The proper way to open a bottle is actually with the blunt side of the saber, not the edge. You aren’t cutting the bottle so much as just pushing the top off.

If you are ever at a fancy restaurant with a sommelier and order champagne, you might ask them to open the bottle with a saber if you’d like something special. Most trained sommeliers should know how to do it.

If you open a bottle normally, you should always hold it at an angle away from anyone, as the cork can actually be dangerous when it flies out.

Champagne has become the way many sports teams and race car drivers celebrate championships. It primarily has to do with the fact that champagne is under pressure, and when you open it, especially if you shake it up, it will spray everywhere.

This tradition is believed to have started with Moët & Chandon donating champagne to winners of Formula 1 races in 1967.

Champagne bottles can be found in multiple sizes. A typical bottle is 750 milliliters.  The smallest bottle is called a piccolo which is only 187 milliliters, and the largest is the Melchizedek which can hold up to 40 standard bottles.

One of the biggest issues surrounding champagne has to do with the name. If you are a wine producer in Napa Valley, Australia, or even southern France, you cannot market wine under the name “champagne”.

This is called appellation. It designates the location where grapes were grown, and a wine was created. By the Treaty of Madrid, which governs international trademarks, the term “champagne” is protected, and only sparkling wine is from France’s Champagne region can use the term.

A sparkling wine produced anywhere else cannot be called champagne.

Champagne has had an outsized impact on culture compared to every other type of wine. It is considered the beverage for wealth and celebration. It is what you order when there is a special occasion.

All of this is due to some winemaking monks in France who accidentally created exploding bottles of wine several centuries ago.

Today’s review comes from listener 845 Limited, over at Apple Podcasts in the United States. They write,

New to this pod — or maybe not? I discovered this about a week ago and have absolutely binged it. I don’t even look at the title/subject because regardless, every episode is totally interesting. And the signal-to-noise ratio is at the TOP, the perfect word is “succinct.” He delivers every bit that the subject needs and wastes not even one moment with nonsense, fluff or awful humor, something that most pods haven’t yet figured out. For what he packs into a 10-minute episode, this podcast rates 6-stars out of 5.

Thank you, 845 Limited!  I succinctly and without any cheesy humor acknowledge your review.

Remember, if you leave a review or just send me a question, you too can have it read the show.