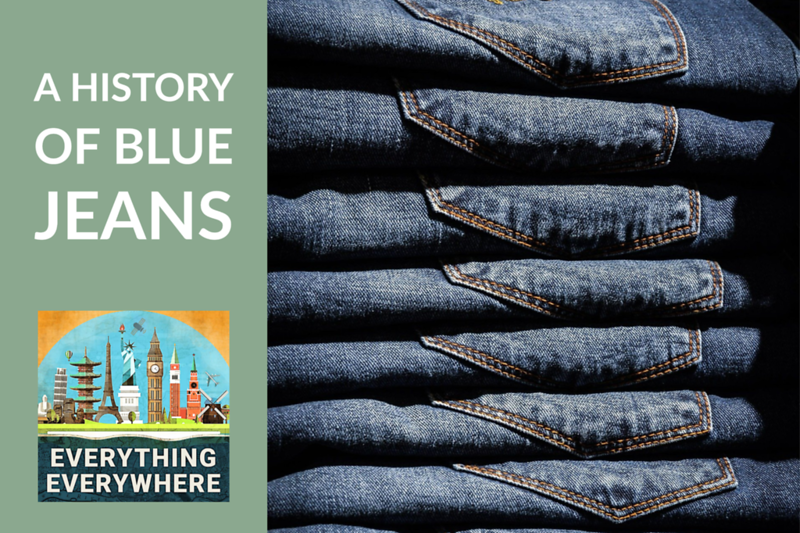 Unquestionably, the most popular clothing innovation of the last 150 years has been blue jeans.

They can be found all over the world, yet they have become synonymous with American culture.

While the modern blue jeans are definitely American, their origin actually goes back centuries earlier to Europe.

Learn more about the history of blue jeans and how they became so popular on this episode of Everything Everywhere Daily.

If you’re interested in fashion but you don’t know where to start, Skillshare can help you learn the skills you need to get started.

They have videos on fashion design, starting a fashion label, drawing sketches, and fashion photography.

They also have numerous videos on sewing, that cover everything from learning how to sew to advanced projects.

Once again, that is Everything-Everywhere.com/skillshare

There is a good chance that most of you listening to this, regardless of where you live on Earth, own a pair of blue jeans.

The story of blue jeans does not actually start in the United States. It starts with the cloth used to make jeans: denim.

In the 15th century, a heavy cloth that came from Genoa, Italy was known as jean cloth. Jean cloth was a cotton heavy fabric, sometimes woven with wool in addition as well. It was developed for sailors to wear wet or dry, and it was also used for sails.

The word jean comes from the French word for Genoa, Gênes.

The Genoese would import a blue dye in the form of indigo from India and used it to dye their cloth. The French called it Bleu de Gênes. So, yes, blue jeans actually referred to a particular cloth, before it ever was used as a name for the pants.

On a related note, the Genoese may have gotten their idea for jean cloth from India. The Indians had a heavy cloth known as dungari which is a Hindi word. Dungari was traded with Europe, via Britain, and was used for heavy pants. Today, dungaree is used to describe an overhaul made out of blue denim.

Denim was developed in the city of Nimes, France. The development was nothing more than an attempt to copy the popular cotton twill cloth that was created in Genoa.

Denim gets its name from de Nimes which just means “from Nimes” in French.

Jean and denim cloth was a popular, cheap cloth for working people in Europe and there are 17th and 18th-century paintings of people wearing what looks like blue jeans.  In reality, they were pants of a similar color and a similar cloth.

Blue jeans as we know them today aren’t just blue pants made out of denim, however. It is something much more specific.

This is where we introduce the pivotal person in the story of blue jeans, Levi Strauss.

His two older brothers had already moved to New York and had started a wholesaling company known as J. Strauss Brother & Co.

Levi worked for his brothers, eventually moving to Kentucky to represent the company until they decided to send him to California.

In 1854, he opened his own wholesale business in San Francisco known as Levi Strauss & Co.

In San Francisco, he had a customer who purchased goods from him named Jacob Davis, who was a tailor. Davis lived in Reno, Nevada, and created clothing and tents made of heavy denim cloth.

One day a woman came to Davis and asked him to create a pair of pants for her husband that didn’t easily fall apart and could be used for heavy work.

Davis took the step which made modern blue jeans: he added rivets to the seams in the places which were most likely to fall apart. In particular, the bottom of the fly and corners of the pockets.

In 1872, Jacob Davis made a proposition to Levi Strauss to manufacture his pants, to which Strauss agreed.

The first pants created by Levi Strauss and Company had two front pockets and one back pocket. The smaller pocket inside the front right pocket was added a few years later and it was designed for pocket watches.

Levi Strauss eventually shifted the business to focus exclusively on the production of blue jeans.

There were early blue jeans made for women. The biggest difference was that men’s jeans had flys in the front, and women’s jeans had buttons down the left side.

In 1901, Levi Strauss introduced their 501 line of jeans which added a second back pocket and created the style we have today. In fact, the Levi’s 501 is still in production.

In 1906, the San Francisco earthquake leveled the Levi Strauss headquarters and destroyed almost all of the corporate history and early versions of the product.

For the first half of the 20th century, blue jeans were a very utilitarian form of clothing. They were mostly worn by workers and farmers. They were not cool and they were not fashionable. If you wore blue jeans you might have been considered a hick or a rube.

The status of blue jeans really started to change in the 1950s. In particular, their depiction in film changed the cultural perception of jeans.

Marlon Brando wore jeans as the rebellious biker in the 1953 movie The Wild One, and most importantly James Dean wore them in 1955’s Rebel Without A Cause.

Wearing blue jeans became a sign of rebellion amongst the youth. Some establishments in the 50s like theaters and restaurants banned customers who wore blue jeans for this reason.

In particular, they became an obsession in the Soviet Union. It is believed to have started with the 1957 World Festival of Youth and Students which was held in Moscow.

Young Soviets were exposed to western culture in a way they never had before.  A black market in blue jeans soon developed which lasted until the end of the Cold War.

French philosopher Régis Debray noted, “There is more power in rock music and blue jeans than in the entire Red Army.”

Originally the Soviets encouraged and produced blue jeans as they were considered clothing for workers, but they soured on it as they became a symbol of western decadence and subversion.

In 1961, Ian Timofeyevich Rokotov and Vladislav Petrovich Faibishenko were actually executed after a show trial for trafficking in black market jeans. The blue jeans brand Rokotov and Fainberg is named after them.

In 1979, the Soviets finally gave in and started manufacturing blue jeans.

In the 1960s, jeans were adopted by the counterculture movement and they also became a symbol of American culture overseas. The Beatles and the Rolling Stones wore blue jeans and by that point, they truly became ubiquitous in American popular culture.

In the 70s, faded and distressed jeans became a fashion rage, and presidents Jimmy Carter and Ronald Reagan were regularly seen wearing blue jeans, which was a first for American leaders.

Perhaps the high point of blue jeans being an iconic American symbol was when Bruce Springsteen put a pair of jeans front and center on the album cover for Born in the USA.

Today blue jeans have annual sales in the tens of billions of dollars per year, with hundreds of millions sold annually, just in the United States.

The oldest pair of blue jeans in the world sites in a safe in the Levi Strauss headquarters. They were manufactured in 1879.

The most expensive pair of retail jeans, without any expensive gems or precious metals embedded, was sold by Gucci for $3,100.

After 150 years, blue jeans show no signs of going out of fashion. It is one of the few things which you will see both on a ranch and on the runway during fashion week.

Perhaps the words of Neil Diamond were prophetic. Maybe we will be forever in blue jeans.