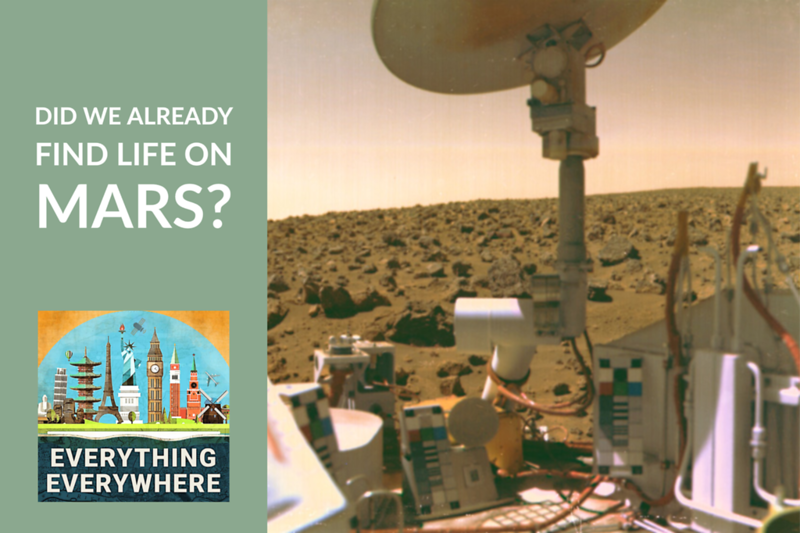 On July 20, 1976, Viking 1 became the first robotic lander to land on Mars. On September 3, its sister Viking 2 followed suit.

Both of them carried experiments to test for biology on Mars, something which no subsequent Mars lander since has replicated.

The results from these chemical experiments have divided researchers for decades and have been the cause of one of the greatest debates in planetary science.

Learn more about if we have already found evidence of life on Mars on this episode of Everything Everywhere Daily.

It’s summer in North America and that means warm temperatures. You might not want to wear a full-blown jacket outside, but that’s OK. Many of the Scottevest jackets have removable sleeves for when temperatures start to climb.

When you go into vest mode, you can still carry all of the stuff that you would when you use it as a jacket. Not only that, but I’ve found cools you down more to carry your stuff in a vest than it does in a backpack because allows for more airflow. Your back can get hot and sticky when you wear a backpack when it gets hot outside.

If you remember back to my previous episode on the history of Mars exploration, sending probes to Mars has been really hit or miss. It turns out that sending a robot to land on the surface of another planet is really really hard.

That was why it was such a big deal when the Viking 1 lander managed to safely touchdown on the surface of Mars on July 20, 1976. It was the first time humans had safely landed on the red planet.

The Viking landers were rather large for planetary probes. Each was about the size of a jeep. Unlike current probes which are rovers or even have a small helicopter, the Viking landers didn’t go anywhere. Their primary jobs were to take photos, gather meteorological and geological data, and provide chemical and biological experiments on the Martian soil.

That last part, the chemical and biological experiments, is what this episode is about.

Both Viking landers had several experiments onboard which have never been replicated in any of the subsequent missions to Mars. Unlike the other missions, the Viking landers were directly looking for signs of biology on Mars, not just for things that might be beneficial for life, like water.

In particular, there were four experiments that were run on each of the landers. These four tests were designed to determine if biological life was in the soil samples the lander took and if there was organic matter.

The GCMS didn’t find any significant amount of carbon molecules. More on the results of this experiment later.

The second was the gas exchange experiment. In this experiment, they sprayed the soil sample with a nutrient solution, and then later with water in addition to the nutrient solution, and increased the heat. They then checked for oxygen, CO2, nitrogen, hydrogen, and methane. The researchers assumed that if anything was metabolizing in the soil, it would either release or consume one of those gases.

The third experiment was the pyrolytic release experiment. In this, they subjected a soil sample to an atmosphere of carbon dioxide and carbon monoxide, which replicated the Martian atmosphere. However, the atmosphere they were exposed to had Carbon-14 isotopes instead of regular carbon-12.

If there were lifeforms in the soil, they would absorb the Carbon-14, which would be evident when they later evacuated the chamber and heated the soil sample. They would also run a control test on sterilized soil.

They determined “analysis of the results shows that a small but significant formation of organic matter occurred”. Moreover, the control test on the sterilized sample didn’t show the same results.

The final experiment, and the one which has received the most attention, was the labeled release experiment.

This was similar to the pyrolytic release experiment, except the nutrients that were fed to the soil had the Carbon-14, not the atmosphere. Here they would check the gasses given off for Carbon-14.

Tests run on both landers came back positive. Gases with Carbon-14 were being given off at a steady rate. They tried running it with soil taken from the surface and soil taken several inches below the surface and got the same results.

Then they tried it on soil which was heated to 50C and the amount of activity was dramatically less. When left in the dark for months at 10C, it had completely ceased.

The data curves were very similar to the test samples done on soil from Earth which had microbes in it.

In the aftermath of the Viking missions, most astrobiologists concluded that the results were either inconclusive or negative. Mostly they focused on the negative results from the gas chromatograph-mass spectrometer.

This was pretty much the state of things up until 1997.

All of the new evidence pointed to the possibility of life on Mars. Granted, it was all circumstantial, but there was nothing that pointed to life on Mars being impossible.

The Curiosity rover showed evidence of organic compounds on Mars.

There is an excess of Carbon-13 over Carbon-12 in the Martain atmosphere, which might be a signature of life as it prefers Carbon-12.

There have been trace amounts of methane found on Mars, which should have long since vanished if it had an ancient origin.

Subsequent analyses have determined that the Viking mass spectrometer wasn’t sensitive enough to detect organic molecules in the small amounts in which it might have existed.

However, there has also been some evidence that inorganic chemistry might have been the cause of the results of the labeled release experiment.

It has been half a century since the original Viking experiments were designed. Patricia Ann Straat passed away in 2020 and Gilbert Levin is now in his 90s.

Levin has called for a mission to repeat the Viking experiments, but this time with vastly improved technology. More sensitive instruments, and most importantly, a test for chirality.

Chirality is when molecules have the exact same chemical formula and structure, but they are mirror images of each other. Think of right and left-handed gloves.

Inorganic chemistry doesn’t have a right or left-handed preference, but biological life does. Assuming that any possible Martian life is like life on Earth, if organic molecules do show a strong preference for one type of chirality, it would be strong evidence for life.

As of right now, NASA has no chemistry or biology experiments like those from the Viking missions planned.

So the answer to did the Viking landers detect life on Mars 45 years ago is a great big, “we don’t know”.

Something is going on. There has been mounting evidence over the years that there is either life on Mars, or there is some sort of inorganic chemistry

While there currently is nothing planned, such a mission has been discussed. One proposal is called the Biological Oxidant and Life Detection mission, or BOLD. This would explicitly be a follow-up to the Viking missions and it is designed to be a low-cost mission with six different landers, no rovers, and no orbital component.

So if in the future, we find evidence which is the smoking gun for life on Mars, it might be that the first proof came from an experiment run on the surface of the planet way back in 1976.