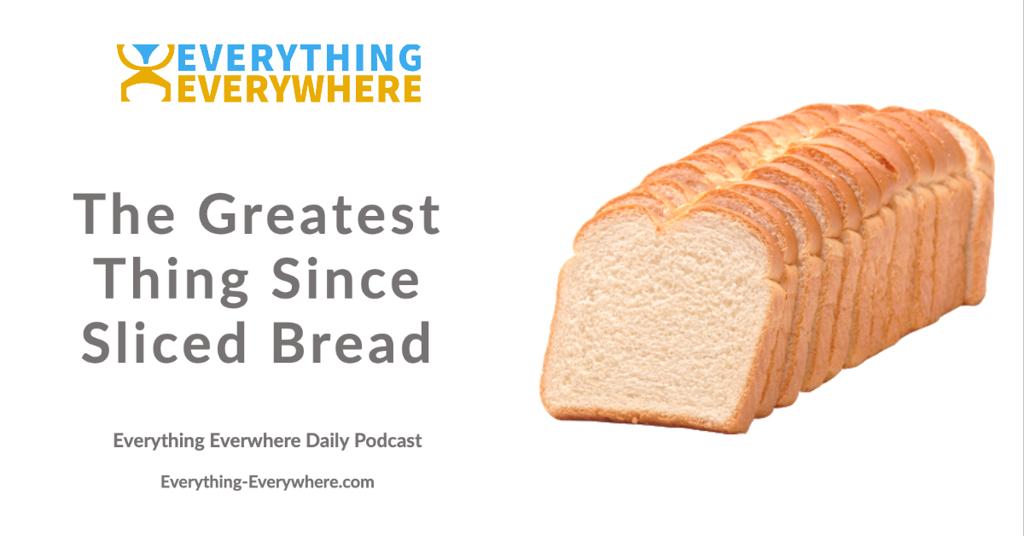 You probably heard the expression that something is “the greatest thing since sliced bread”.

Well did you ever wonder what the greatest thing was before sliced bread? Or why we measure greatness in terms of sliced bread?

Well, there’s an answer to these questions.

Learn more about why sliced bread is so freaking amazing on this episode of Everything Everywhere Daily.

This episode is brought to you by the Travel Photography Academy.

Have you ever been on a trip and wondered why your photos don’t turn out like the images you see in travel magazines?

That is why I created the Travel Photography Academy. I set out to travel around the world in 2007 with an expensive camera and no idea how to use it.

As I traveled around the world, I taught myself the art of travel photography, eventually mastering it to the point where I was named travel photographer of the year three times in North America.

The travel photography academy is an online course that teaches you everything you need to know to master your camera, and to take better photos on your next trip.

To improve your photography and to get better images on your next trip, visit TravelPhotographyAcademy.com or click on the link in the show notes.

Humans have been baking bread for well over 14,000 years. The earliest evidence of human bread-making was charred crumbs found in 2018 in the Black Desert of Jordan, and it indicates that the people there were making a type of flatbread that was probably eaten with meat. Perhaps the world’s first sandwich.

Bread became the staple product of many civilizations in Asia, Europe, and Africa.

Bread and circuses were the staples of Ancient Rome, and it was how many emperors were able to stay in power.

Bread has been called the staff of life, and it plays a central role in the rites of many Christian churches.

When we dine with someone, we say we are breaking bread with them.

Suffice it to say that bread has been really important to human civilization.

For millennia humans made loaves of bread by hand and humans usually ate reasonably fresh bread on the day it was made.

And for as long as humans have been eating bread, we have probably been slicing bread or at least cutting it with a knife, waiting patiently for the day to arrive when humanity would be freed of the horrible burden of having to slice bread by hand.

Creating an industrialized way to slice bread and to sell it is much more difficult than you might thing.

Cutting bread isn’t like cutting wood. Simply applying sharp blades to the bread will usually squish it because the bread is so soft. Once the bread is cut, you have to keep the entire loaf together, or else you just have a bunch of loose bread slices flopping around, which can really disrupt a bread assembly line.

The arrival of pre-sliced bread arrived in July 1928, in the small town of  Chillicothe, Missouri.  After several failed attempts, and losing his original blueprints in a fire, an inventor by the name of Otto Frederick Rohwedder created a device that would cleanly cut a loaf of bread into slices of equal thickness.

Originally trained as a jeweler, Rohwedder did extensive market research for years, sure that sliced bread would be a hit and would make him rich.

The invention did get a lot of attention at first. Upon its release, the new sliced bread was a front-page story in the local Chillicothe Constitution-Tribune. The paper reported that “So neat and precise are the slices, and so definitely better than anyone could possibly slice by hand with a bread knife that one realizes instantly that here is a refinement that will receive a hearty and permanent welcome,”

One problem that sliced bread had was that it went stale faster. Because each slice was exposed to the air, the entire loaf could dry out quickly. Also, people just aesthetically didn’t think that a loaf of sliced bread looked very good compared to what they were used to. The loaves tended to slump and people said it looked sloppy.

Rohwedder developed seven patents between the years 1927 and 1936, all dedicated to slicing bread.

It was then that sliced bread really took off.

Sliced bread took less time to prepare. Thinner, more uniform slices made it easier to make toast, and the sale of pop up toasters took off as a result. It was the popularity of sliced bread which made peanut butter and jelly take off in the United States as it allowed children to easily make their own sandwiches.

By 1933, just 5 years after it was introduced in Chillicothe, Missouri, 80% of all bread sold in the United States was sliced.

In the United Kingdom, the first bread slicing machines were first installed in 1937 at the Wonderloaf Bakery in Tottenham, England, and sliced bread accounted for 80% of bread sales there by 1950.

There was one setback in the history of sliced bread, and that occurred in 1943, during World War II. US Secretary of Agriculture Claude Wickard placed a nationwide ban on sliced bread. The intent was to save metal and wax paper which was used in the production of sliced bread for the war effort.

There was a strong nationwide backlash to the sliced bread ban, and it was quickly reversed in only three months.

This brief history of sliced bread is fascinating, but it really doesn’t answer the question of why we use the phrase “the greatest thing since sliced bread”.

In doing research for this episode, I couldn’t find anyone who could give a real clear answer.

There were several companies in the 1930s and 1940s which touted improvements to their bread by saying it was the greatest advancement baking since “sliced bread”. These improvements were often in the form of packaging, vitamin fortification, and changes in the size of slices.

More general use of the term started to appear in the 1950s. In 1951 American journalist Dorothy Kilgallen writing in the New York Journal-American reported that English actor “Stewart Granger “is the greatest thing since sliced bread”

In 1952 comedian Red Skelton said in an interview “Don’t worry about television. It’s the greatest thing since sliced bread”.

So it seems that comparing things to sliced bread was just something that just organically happened over time.

That leaves us with one final question. What was the greatest thing before sliced bread?

Well, we actually have an answer to that. It was given in the July 6, 1928 edition of the Chillicothe Constitution-Tribune which I mentioned earlier. In the article announcing sliced bread to the world they said, and I quote, that sliced bread was “greatest forward step in the baking industry since bread was wrapped.”