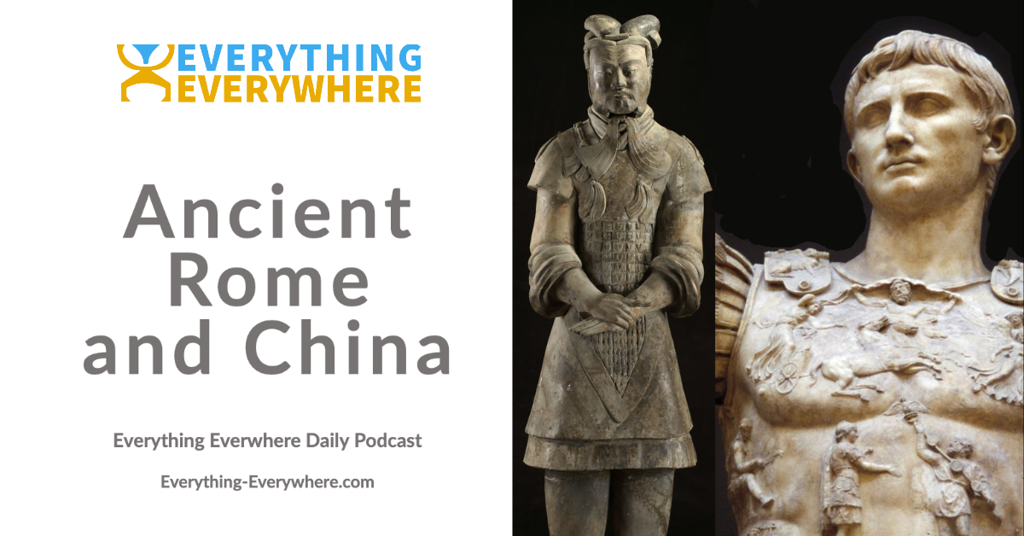 2,000 years ago the Han Empire in China and the Roman Empire in Europe were the two greatest empires in the world.  Between them, they covered an enormous amount of the Earth’s land and a large percentage of the world’s population.

But were these two great empires even aware of each other? If so, was there any contact between them?

Find out how these two great ancient empires interacted with each other on this episode of Everything Everywhere Daily.

Before I start  I should say that whenever we talk about the ancient world there’s a lot we just don’t know.

Most of the writings we have from this time were written down hundreds of years after events took place, and of the things that were written down, the vast majority of it has been lost to history. So what we have is a scattering of documents and whatever archaeologists might find.

That being said, there is ample evidence that China and Rome knew about each other, but that doesn’t mean they knew very much. What they knew mostly consisted of rumor, legends, and stories.

There is little evidence of any direct contact between the two empires. Not only were they separated by enormous distances with deserts, mountains, and seas in between, but they also had some very large and powerful kingdoms and empires in between them.

In particular, the Parthian Empire, which consisted of much of what is today Iran and Iraq.

The Parthians had a very lucrative business in serving as a middleman between China and Rome. Most land trade routes passed through their territory as they controlled all the land between the Caspian Sea and the Indian Ocean.

If you traveled by sea, you’d have to stop in one of their ports if you wanted to avoid an open-ocean crossing between India and the Arabian peninsula, which few ships at that time were willing to do.

To look at what they knew of each other, let’s start with what the Chinese knew about the Romans.

Most of what we know about Chinese views of Rome comes from a document called the Weilüe, which was written by the historian Yu Huan during the Three Kingdoms period, between the years 239 and 265.

The Chinese name for Rome was Daquin or Great Quin. This could be a reference to the Quin Dynasty, and the first emperor of a united China, Quin. This might have been their way of implying that the Roman Empire was on a par with the Quin Empire in terms of greatness.

Some of the passages indicate just how basic their knowledge of Rome was. Here are some passages from the translation of the Weilüe.

This country (Daquin) has more than four hundred smaller cities and towns. It extends several thousand li in all directions. The king has his capital (that is, the city of Rome) close to the mouth of a river (the Tiber). The outer walls of the city are made of stone.

This description of Rome is so generic that it could apply to almost any city in Europe, or even most of Asia.

The ruler of this country is not permanent. When disasters result from unusual phenomena, they unceremoniously replace him, installing a virtuous man as king, and release the old king, who does not dare show resentment.

This is probably referring to the Roman system under the Republic where consuls were elected to one-year terms, however, by the time the Weilüe was written, it has been several centuries since this was the case.

The Weilüe even goes to explain why they haven’t had direct contact with Rome:

They have always wanted to communicate with China but, Anxi (Parthia), jealous of their profits, would not allow them to pass (through to China).

This was right on the money. The Parthians made too much money off goods passing through their territory, and the last thing they wanted was for Romans and Chinese to trade with each other directly.

They also indicate the primary product which Romans were importing:

Furthermore, they regularly make a profit by obtaining Chinese silk, unravelling it, and making fine hu (‘Western’) silk damasks. That is why this country trades with Anxi (Parthia) across the middle of the sea.

They identified the Roman Senate by noting:

“They have appointed thirty-six leaders who discuss events frequently.”

The senate actually had way more than 36 people, but they did get the gist of it.  They even noted that they wore something like a toga and that the Romans cut their hair.

So, what did the Romans know of the Chinese?

The Roman word for China was Serica, and the Chinese were called the Serens. The word is derived from the Latin word for silk, sericum.

While Serica mostly refers to China, it really sort of applies to everything to the east of India. They just didn’t enough knowledge of the region to differentiate the different cultures which lived there.

Then [sc. east of the Caspian], we again find tribes of Scythians and again desert tracts occupied only by wild animals, till we come to that mountain chain overhanging the sea which is called Tabis. Not till nearly half the length of the coast which looks north-east has been past do you find inhabited country. The first race then encountered are the Seres, so famous for the fleecy product of their forests .

He got the general direction of China right, however, he totally had no clue where silk came from, thinking it was a forest product and a type of wool.

Almost all mentions of Serica in Roman literature are with regards to silk, or its location. There is very little which indicates that they knew about Chinese culture or the people who lived there.

As for trade, we know the Romans imported silk, but we had very little evidence of what the Chinese might have imported. The truth is they probably imported very little of actual Roman origin because most of what Rome exported would have been bulky goods like wine, wheat, and ore, which could have made it to Parthia, but not much further.

There were also several samples of Roman glass which were found in Chinese tombs as well. There was glassmaking in China, so the demand for foreign glass probably wasn’t very high, and transporting something so fragile, so far was extremely difficult.

Did any people ever make the trip from Rome to China?

The answer is yes, but not very many.

The Roman historian Florus made note of envoys from the east who visited Rome during the rule of Emperor Augustus:

Even the rest of the nations of the world which were not subject to the imperial sway were sensible of its grandeur, and looked with reverence to the Roman people, the great conqueror of nations. Thus even Scythians and Sarmatians sent envoys to seek the friendship of Rome. Nay, the Seres came likewise, and the Indians who dwelt beneath the vertical sun, bringing presents of precious stones and pearls and elephants, but thinking all of less moment than the vastness of the journey which they had undertaken, and which they said had occupied four years. In truth it needed but to look at their complexion to see that they were people of another world than ours

There is no record in any of the documents of the Han Empire which made note of an official delegation to Rome, so they were probably just merchants acting on their own.

In the year 97, a Han envoy by the name of Gan Ying was sent to explore the west. He arrived in Parthia, but they Parthians convinced him not to travel further west as they told him it was dangerous and would take 2 more years to get to Rome. Most Chinese knowledge of Rome probably came from second-hand information learned by Gan Ying on his voyage.

There was a Roman delegation that arrived in China in the year 166. The Han records show them having been sent by an Emperor “Andun”, which is believed to be the Emperor Antoninus Pius, or his adopted son, Emperor Marcus Aurelius. The envoys were said to have traveled by sea from the south, entering China through what is today Vietnam.

As with the Chinese in Rome, there are no Roman documents confirming that an envoy was sent to China. Nonetheless, Emperor Huan played up the visit of the Romans to help his domestic political situation, as ambassadors from Daquin provided him with a great deal of prestige.

So the answer to if the Chinese and Romans knew of each other is yes, but what they knew was really vague second-hand information. The Chinese knew the Romans wanted their silk, and the Romans knew they produced silk, but there was almost no direct contact between the two empires.

Before I close, I should make note of one final thing:  the legend of the lost Roman legion.

In 54BC, the Roman general Crassus, one of the original members of the First Triumvirate with Pompey and Julius Caesar, lost to the Parthians in the Battle of Carrahae. It was one of the most humiliating losses in Roman history. 20,000 Romans were killed and over 10,000 were captured.

Those 10,000 captures Roman legionaries were believed to have been sent to fight for Parthia in their eastern frontier.  The Chinese general Ban Gu reported of fighting approximately 100 men who used what he called a “fish scale” formation, which is very similar to the Roman testudo formation, where soldiers would interlock their shields for protection.

A myth started in the 20th century in the Chinese village of Liqian (licl-e-on that some of the people there were descended from these Roman legions who worked their way to China after the Battle of Carrahae. Unfortunately, there has been no archeological evidence of any ancient Europeans ever having traveled that far inland into China and recent DNA testing shows that European traits that some of the residents show most probably came from Central Asia.