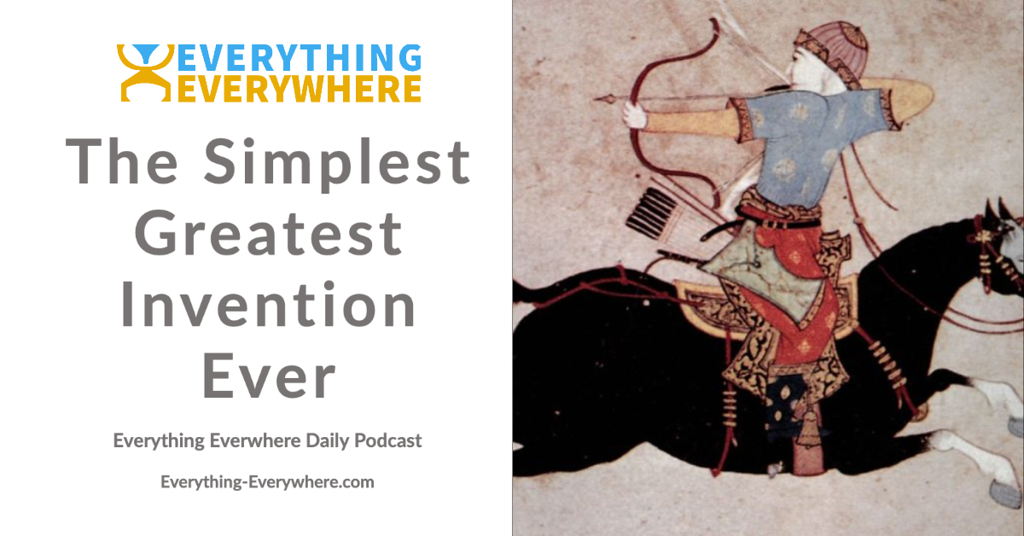 Every so often, an idea comes along that is so simple, yet so profound that you smack yourself in the head for not having thought of it yourself.

Even more rare is such an idea that can have global implications. An idea that can create empires, topple kingdoms, and establish economic orders which can last for centuries.

Find out about the incredibly simple, yet profound idea which changed the course of human history on this episode of Everything Everywhere Daily.

If you are old enough, you remember a time when suitcases didn’t have wheels. You probably also remember the first time you saw a suitcase with wheels, and your first reaction, like almost everyone else, was “Why didn’t I think of that?”

This episode is not about suitcases with wheels. It is about something far more basic, with results far more profound on the direction of human history.

So what is this incredibly simple invention which changed the course of human history?

Yes, the two hoops that hang off the saddle of a horse. The stirrup.

You’d think that stirrups would have been figured out almost immediately after the domestication of the horse, or at least soon after the invention of the saddle, but that was not the case.

We know that the Romans during the Republican period did not use saddles at least during Caesar’s invasion of Britain. It wasn’t until years later into the Imperial period that four-point saddles were first used by Romans.

Roman cavalry was most often used as mobile infantry, where they would ride quickly to flank an enemy, and then get off their horse and fight. They did fight on horseback, as was famously done at the battle of Alesia when Julius Caesar defeated the Gaul army under their leader Vercingetorix, however, they would often have to fight, keeping their balance on the horse with their legs.

At no point did the Romans ever use stirrups. They weren’t widely used in Europe until after the fall of the Western Empire after they were introduced by invading tribes.

It is estimated that the first saddle was used around 300 BC and it was probably developed by the Chinese. The saddle developed as an advancement of the blanket which had always been used on horses and didn’t provide any way for a rider to balance themselves.

The first real evidence of stirrups comes from Inda. There are Indian sculptures dating back to 200BC that show barefoot riders using a type of stirrup that only fit a rider’s big toe. Just having a stirrup for your big toe might provide some stability on a horse, but a rider can’t really put their weight on just their big toes.

The problem with stirrups is that unless you can spread out the pressure created by the rider putting all of their weight on one spot, it would be extremely uncomfortable for the horse, creating sores on the back of the animal.

The development of stirrups came about with the invention of the treed saddle, which is the hard wooden part of a staddle which is below the leather or cloth that the rider sits on. This rigid surface allows the weight of the rider to be more evenly distributed on the back of the horse.

There is some evidence of an L shaped footrest on horses on engravings from Central Asia dating to the year 100. However, they were yet a true stirrup as they didn’t encircle the foot, and it would have been easy for a riders foot to slip out.

It is in the year 322 in China where we see the first evidence of a true stirrup. There are triangular stirrups shown in carvings in tombs from the first Jin Dynasty, as well as an actual stirrup which was found in a tomb in Anyang, China.

So, now we had stirrups. What’s the big deal. Why were footholds on a horse saddle so world-changing?

Well, there were two major, world-changing things which stirrups allowed to happen. Take stirrups away, and our world becomes a very different place.

Archers had been shooting bows off the backs of horses for centuries, but the stirrup changed the game entirely. The Mongols, who came from the grassy steppes of Central Asia, had a culture that was based on horses. They were able to conquer much of China, India, Central Asia, the Middle East, and Eastern Europe because of their ability to fire arrows on horseback.

It was an absolutely devastating technique, which was also used by the Huns centuries earlier and led to the downfall of the western Roman Empire.

Over the Europe, stirrups were used in a totally different way. Here, they were used to create heavy calvary. The stirrup allowed an armored knight to remain stable on their horse while using their sword or a lance.

This created the medieval version of a tank. An armored rider on an armored horse.

There is a great debate amongst historians called the Great Stirrup Controversy. This theory holds that the innovation of the stirrup allowed for feudalism to rise in Europe because it allowed for mounted knights. These knights were able to use their heavy armored calvary to hold and control landholdings and control local populations.

It also led to the development of new weapons like the longsword, which replaced the ax in much of Europe, because it was easier to use on horseback.

The Stirrup Theory isn’t universally accepted amongst scholars, but the use of the stirrup certainly contributed to the revolution in European warfare.

Just in case you are wondering what would happen if these two different schools of mounted combat were to clash, history has given us an answer to the question, and it really isn’t even close.

From the years 1240 to 1506, the Mongol Golden Horde ruled over what is today Western Russia, Ukraine, Moldova, and Kazakhstan. On several occasions, they fought heavy European calvary, and almost every time the result was a lopsided win for the Mongols.

The Mongol horses were bred for speed, so they could carry their riders quickly into and out of combat. The European horses were bred for strength to carry the heavy load of a knight and his armor. When the two sides met, the Mongols would often literally run rings around their opponents, shooting arrows into them, and never letting the larger European horses get close.

It is hard to express just how important the stirrup was to world history. Several large empires owe their existence to the stirrup as does the entire system of economic production which dominated Europe for hundreds of years.