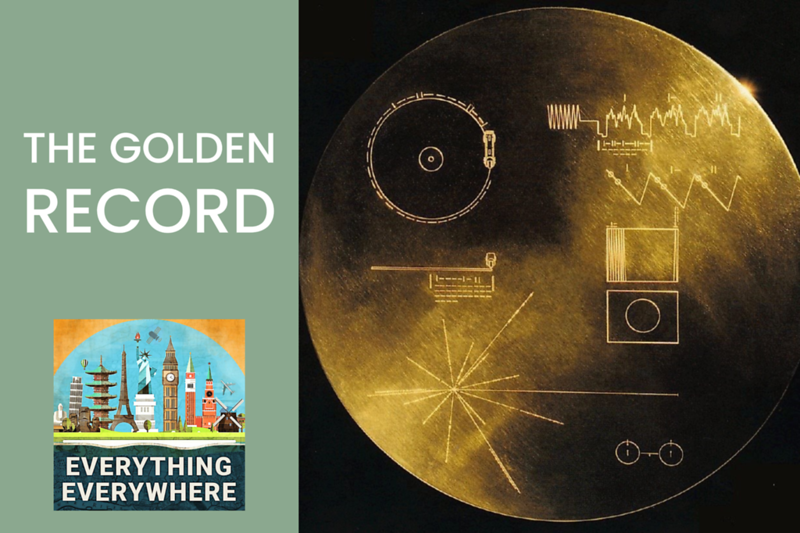 In the 1970s NASA embarked on a mission it had never attempted before. Due to a fortunate alignment of planets, they were going to attempt to send robotic probes on a flyby mission to Jupiter, Saturn, Uranus, and Neptune, before being sent to deep space, out of the solar system.

Some of the mission planners figured if they were going to send a probe all that way, maybe they might as well add something extra to the payload.

Learn more about the Golden Record, and how the entire human experience was encapsulated on to a 12-inch disk, on this episode of Everything Everywhere Daily.

My audiobook recommendation today is The Interstellar Age: The Story of the NASA Men and Women Who Flew the Forty-Year Voyager Mission written and narrated by Jim Bell.

The Voyager spacecraft are our farthest-flung emissaries–11.3 billion miles away from the crew who built and still operate them decades after their launch.

The mission was planned as a grand tour beyond the moon, Mars, Jupiter, and Saturn; and into interstellar space. The fact that it actually happened makes this humanity’s greatest space mission.

The Voyager program’s origin began in the 1960s. The very first interplanetary probes which NASA sent out were under a program called Mariner. The Mariner program managed to launch 10 probes between 1962 and 1973 which visited and photographed Mars, Venus, and Mercury.

As the Mariner program advanced, NASA began to look at visiting the outer planets in the solar system.

In fact, the late 1970s offered a once in a lifetime opportunity. To get to the outer planets, you need a lot of energy. That means either a really big rocket or using energy from other planets, called a gravitational assist.

In the late 70s, the outer planets would be arranged in such a way that you could visit all four of the gas giants on a single trip with a gravitational assist.

Out of the Mariner program, they created a new program called the Voyager Program. It would send two probes that would not only reach the outer planets but would go fast enough to escape the gravity of the solar system itself.

The Voyager program was much more ambitious, and moreover, they would be the first human objects to leave the solar system and head out into interstellar space.

The Pioneer probes had small plaques attached to them which were a drawing of a human male and female, as well as a diagram of a hydrogen atom, and the location of Earth. It was very small and very limited in its information.

In 1976, as the Voyager missions were still in the planning stages, astrophysicists Carl Sagan and Frank Drake were putting together ideas for what to put on the plaque for Voyager 1 and 2. Eventually, they came up with the idea of putting something on it far more ambitious than a plaque.

They were going to attach a record.

A 12 inch, 30 centimeters, analog record, which would contain far more information than you could possibly put on a plaque.

They only had about 6 months to put this together.

The producer of the record was science writer Timothy Ferriss, not the podcaster.

Then, from the advice of John Lennon, he hired a young audio engineer named Jimmy Iovine, who would later gain fame as a hip-hop producer and the founder of Beats headphones.

They then set out to assemble a representative collection of music from Earth.

That sounds much easier than it is. You can only put so much on a record, so they had to make decisions as to what would be put on the record, and what would be left off.

They ended up with 90 minutes of music from every continent and many different genres. Countries represented included the Democratic Republic of Congo, Germany, Indonesia, Australia, the Solomon Islands, the Navajo Nation, and many more. It also included music from Louie Armstrong, Blind Willie Johnson, Beethoven, Bach, and Chuck Berry.

In addition to music, there were also spoken greetings which were done in 55 different languages. Each greeting was short, and there was no script they had to follow. They range from the very simple, one word “Shalom” in Hebrew, to greeting in the Amoy Chinese dialect which said “Friends from space, how are you all? Have you eaten yet? Come visit us if you have time”. All of the greetings were done by people who lived in or around Ithica, New York, the location of Cornell University where Sagan and Drake both worked.

The English greeting was recorded by Carl Sagan’s son, Nick.

Five of the languages included were dead ancient languages such as Latin and Sumerian.

In addition to greetings and music, there were also a collection of random sounds from the planet. Volcanos, thunder, wind, birds, whales, laughter, a kiss, a tractor, a Saturn V rocket, and many others.

When you think of a record, you obviously think of sound. However, there were also images included. There are 115 images in total which were encoded in analog. These include a calibration image of a circle, so people can figure out how to decode everything else. A set of images that explains our mathematics and symbols. And lots of images of people, places, and animals from all over the planet.

Overall, give the time constraints they had, I think they did a pretty good job of presenting a good cross-section of humanity.

The physical record is self is made of copper and gold plated. Eight copies of the record were made, with two of them being used on the actual spacecraft.

The case for the record is made of aluminum, with an etching on the outside showing in pictographs how to play the record. There was also a layer of puer Uranium-238 which was place on the record cover.

This was intended to be a clock. Because U-238 has a half-life of 4.5 billion years, should any civilization find the probe, they will be able to determine the approximate date it was launched by the amount of U238 still remaining. Here, I’ll reference my episode on radiometric dating.

On the very inner circle of the record, there was a short message etched in hand by Timothy Ferriss. It read, “To the makers of music – all worlds, all times”.

This short inscription almost led to the project being scrapped. Because the specifications for the record didn’t have that inscription listed, NASA was initially going to send the spacecraft up with a blank record instead. However, Carl Sagan eventually convinced them to do otherwise by noting this was the only example of human handwriting to be sent on the probes.

After the probes were launched, the team which worked on the golden record assumed that it would be released commercially.

There were a few bootleg tapes that floated around, but nothing official was ever released.

In 2016, a Kickstarter campaign raised over $1 million dollars for the release of the record as a box set, and the original masters were used to recreate it.

Believe it or not, the record which was the first human object to leave the solar system, and tried to encapsulate the human experience on a record,  was nominated for a 2018 Grammy Award for “Best Boxed Or Special Limited Edition Package.”

Today, you can see one of the copies on display at the Smithsonian Air and Space Museum’s Udvar-Hazy Center at the Washington Dulles International Airport.

As for the probes themselves, believe it or not, they are still functioning.

In 2012, Voyager 1 passed through the Heliopause, which is the boundary where the particles from the solar wind decrease in velocity due to pressure from interstellar gas.

The plutonium power source is only at about 57% of what it was when it was launched back in 1977. Today, almost all of the instruments on the probe have been turned off to conserve power, save for the Ultraviolet spectrometer and the radio.

It can still radio back data, however, it is becoming increasingly difficult to do so.

Given its distance, the amount of power remaining, and 45-year-old technology, it can only transmit at 160 bits per second.

The strength of the signal now is one-millionth of one-billionth of a watt of power.

Radio antennas around the world have to work in unison to pick up the signal as it is so weak and so far away.

It is estimated that the problems might only have about 10 years’ worth of power left before the amount of plutonium has decayed to a point where it is no longer viable to produce power.

After that, it will be sailing on forever, at 11 miles per second, as humanity’s greatest time capsule.