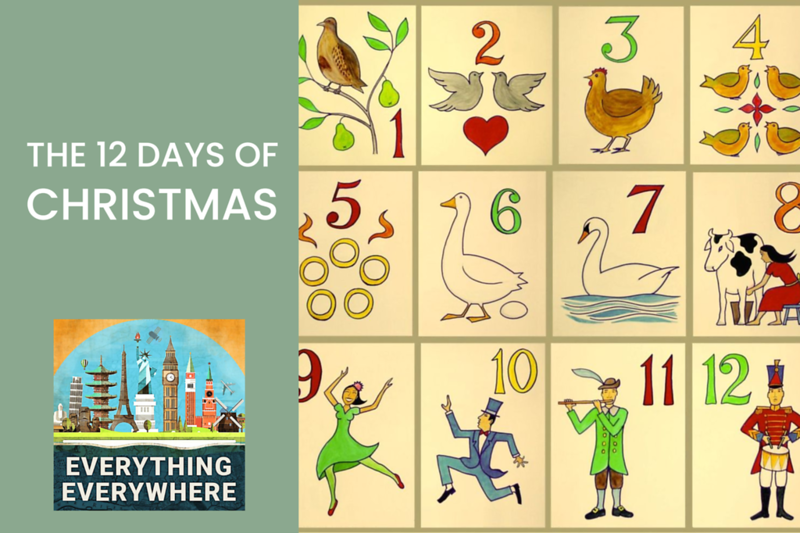 I’m sure all of you have heard the 12 Days of Christmas song. It is the holiday equivalent of 99 Bottles of Beer on the Wall, and no one ever sings it to completion because it’s so long.

But it does raise the question, what are the 12 days of Christmas? Why are there 12? And why am I doing an episode on this in January well after Christmas is over?

Learn the answers to these questions on the episode of Everything Everywhere Daily.

Today’s audiobook recommendation is The Santa Claus Man: The Rise and Fall of a Jazz Age Con Man and the Invention of Christmas in New York by Alex Palmer.

Before the charismatic John Duval Gluck, Jr., came along, letters from New York City children to Santa Claus were destroyed, unopened, by the US Post Office. Gluck saw an opportunity and created the Santa Claus Association. The effort delighted the public, and for 15 years money and gifts flowed to the only group authorized to answer Santa’s mail.

The rise and fall of the Santa Claus Association is a caper both heartwarming and hard-boiled, involving stolen art, phony Boy Scouts, a kidnapping, pursuit by the FBI, and a Coney Island bullfight.

Many people think the 12 days of Christmas end on Christmas day. This is false.

Christmas is actually the beginning of the 12 days.

The 12 days of Christmas is a reference to a season which was known as Christmastide.

Christmastide was originally established by the 567 Council of Tours, which if you remember just a few episodes ago, was the medieval council that got rid of January 1 as the date of the start of the new year.

Christmastide was to be a 12-day feat that began on Christmas Day and followed up the 40 day season of Advent, which was a time of fasting. It was sometimes known as “Twelvetide”.

Most of us are aware of Christmas, and maybe Boxing Day if you live in a Commonwealth country, and of course New Year’s Eve and New Year’s Day, but what is so special about the other days?

The number of days was set because January 5 is Epiphany Eve. This is also known as the 12th Night, which if that rings a bell, it is because there is a Shakespear play by the same name.

Epiphany, also known as Three Kings Day, is the day which is traditionally celebrated as when the Three Kings or Three Wise Men, visited Jesus, and the 12 days is the time it took them to make the journey.

Epiphany is actually a bigger celebration than Christmas in many countries such as Spain and where Orthodox Christianity is prevalent. In the United States, it is all but ignored.

The confusion I always had was I assumed that the Ephipiny was part of the 12 days of Christmas. No matter how you work the math, if you try to include both Christmas and Epiphany, you get 13 days.

That is because Epiphany is not part of the 12 Days of Christmas, because it is considered a solemn holy day and not a day of feasting, although as I mentioned, it actually is a big celebration in many countries.

Once a 12 day holiday season was set, the rest of the days sort of got retconned with other holy days, mostly celebrating saints. Which saints were celebrated would differ depending on the country.

One of the traditions which are directly tied to the 12 days of Christmas was the yule log.

Most people are aware of a thing called a yule log, but they don’t really know what it was for.

So, OK, the 12 days of Christmas start on Christmas and ends on January 5th, and it was mostly a religious celebration.

So what is the deal with the song?

The earliest known publication of the song dates back to 1780 in England, although the song itself might have been French in origin.

The lyrics to the song which are sung today only date back to 1909, however.

The standard form today consists of:

The lyrics of the song differed radically throughout the 18th century, and there were often regional variations in what gifts were listed.

Instead of a partridge in a pear tree, it was sometimes “a sprig of a juniper tree” or “a very pretty peacock upon a tree”.

There were rumors that the song might have been a covert Catholic song sung in England when the religion was outlawed, but there is little evidence for it.

Every year, the cost of purchasing all of the items in the song is calculated by PNC financial. They have been doing this since 1984. The 2020 cost was $16,168.14 which was a massive 58% drop in price over 2019, mainly due to the pandemic making the hiring of lords-a-leaping, ladies-dancing, and drummers-drumming, impossible.

The price of hens, geese, and swans did go up, however.  The price of a partridge in a pear tree, however, stayed steady.