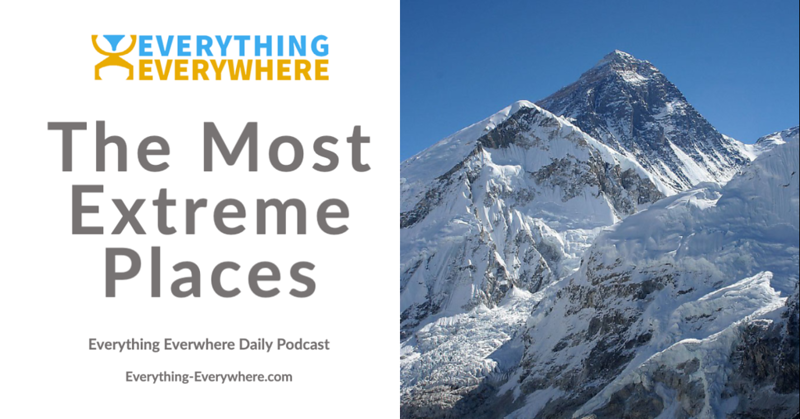 Earth is a big place. Really big. And on it are mountains, deserts, rivers, and swamps.

Learn more about the Earth’s most extreme points on this episode of Everything Everywhere Daily.

It doesn’t matter if you are going to the highest, lowest, hottest, or driest point on the planet, Scottevest has you covered. I’ve personally worn Scottevest gear to over 100 countries and it has covered me stylishly in each one, all while carrying my important gear.

If you view the Earth from space, it looks like a perfect sphere.

In fact, the only reason that the Earth looks so irregular is that we happen to be living on the surface and we are very small in comparison.

The difference is so small that you couldn’t tell if you just looked at a photo of the planet, but it’s there.

I mention this because it is relevant when it comes to the first extreme point on Earth, the highest point.

Most of you will immediately say that the highest point on Earth is Mount Everest, and you are not necessarily wrong.  As measured from sea level, Mount Everest is the highest mountain in the world at 8,848 m or 29,029 ft in height.

However, you might have noticed that the bulge around the equator is 46.2 km, which is higher than the height of Mount Everest.

What that means is that Mount Everest isn’t the farthest point from the center of the Earth, nor is it the point on Earth that is closest to space. That distinction is held by Mount Chimborazo in Ecuador.

If you measure a mountain from its base, rather than from sea level, then the highest point would be Mauna Kea on the Big Island of Hawaii. The peak of Mauna Kea is 4,205 meters or 13,796 feet above sea level. However, it extends another 6,000 meters or 19,700 feet below the sea to the ocean floor.

Because the earth is spinning creating centripetal force, it actually means that the force of gravity on the surface can vary every so slightly. Very slightly. The highest gravity is on the surface of the Arctic Ocean and the lowest is on top of Mount Huascarán in Peru. The reason why it isn’t Mount Chimborazo has to do with the rock composition below the mountain.

The difference is about 1% between the two extremes, so don’t expect any miracle weight loss by moving to Peru.

I have to say approximately because the number is always changing. The level of the Dead Sea is dropping by a full meter each year, which is a lot. There is almost no rain in the region and the primary source of water, the Jordan River, now has most of its water diverted for agriculture.  That means all of the water in the Dead Sea keeps evaporating.

Technically, it is located in the ocean territory of the Federated States of Micronesia. Only 13 people have ever traveled down to the bottom, including director James Cameron. That is only one more than the number of people who have landed on the Moon.

If I asked you what the longest river in the world was, some of you might say the Amazon and some might say the Nile. Both answers would be correct. Sort of.

There is actually quite a bit of debate as to which river is longer, which you think would be easy to resolve with satellite mapping. It all has to do with how you define a river. Where do you define the river’s end? Where you do define it beginning? Because rivers can swell with flooding, what time of year do you measure?

There have literally been papers published in peer-reviewed journals on this subject, and papers have advocated for both the Amazon and the Nile.

Suffice it to say that the error bars on the measurement are larger enough that the two rivers overlap, and that you can make an argument for either one if it matters that much to you.

The largest waterfall once again not a straightforward question.

The highest waterfall is unquestionably Angel Falls in Venezuela. It has a vertical drop of 979 meters or 3,212 feet. However, highest doesn’t necessarily mean largest.

How much of a vertical drop do you need to be considered a waterfall? A very loose definition would give the title to Inge Falls in the Congo River. However, it is really more of a rapid than a waterfall. It drops 96 m over 19 km.

The widest waterfall, and another claimant for largest by volume, would be the Khone Falls at 10.7 km wide on the Mekong River. This too isn’t a massive water drop, but it is more of a waterfall than the Inge Falls is.

The largest sheet of falling water, which takes into consideration both volume and drop, would be Victoria Falls on the border of Zambia and Zimbabwe.

The largest freshwater lake in the world is the Caspian Sea. It’s so large that it isn’t even called a lake. It has a surface area of 371,000 km2, making it significantly larger than the second largest lake, Lake Superior.

The deepest lake in the world is Lake Baikal in Russia at a depth of 1,642 m or 5,387 ft. It is over 1,000 meters deeper than the next deepest lake, Lake Tanganyika in Africa.

Moisture extremes can vary and be more difficult to nail down but for sure the driest place in the world is the Atacama Desert in Chile. The average rainfall in the desert is 15 millimeters per year, but there are some weather stations that have never recorded any rain, ever.  There is even some evidence that parts of the desert may never have had any rain in the 400 years from 1570 to 1971.

The consensus for the wettest place on the planet seems to be Mawsynram, India. The average annual rainfall is 11,871 millimeters, or close to 39 feet of rain every year!

The hottest temperature is a matter of some debate. The official mark is 56.7 °C or 134.1 °F in Furnace Creek, Death Valley, California in 1913. However, there is some debate about the accuracy of the measurement given some nearby anomalous readings. If that isn’t the highest temperature, then the next highest would be 54.4 °C or 129.9 °F recorded in the same place in 2020.

I want to close with an extreme point that you probably wouldn’t think about. Almost all of the planet is divided into watersheds. Areas where all the water drains. In the Americas, you have the Continental Divide. This is the line where streams on one side flow into the Atlantic and on the other side into the Pacific.

Africa has a similar divide between the Nile and Congo basins.

However, there is only one place on Earth which is a triple divide. A point where water can flow to one of three oceans. That place is Triple Divide Peak in Montana. Here, water can flow into the Atlantic, Pacific, or the Arctic Oceans.

There is one other oddity with the Continental Divide in North America.

There is a particular small stream in Wyoming called Two Ocean Creek. Two Ocean Creek forks into two different creeks, which is not uncommon. What is uncommon is that the creek happens to split exactly on the Continental Divide. The two creeks it splits into are called Atlantic Creek and Pacific Creek.

Atlantic Creek flows into the Yellowstone River, which then joins the Missouri River and finally the Missippi River.

Pacific Creek flows into the Snake River, which joins the Colombia River.

That means it is theoretically possible for a fish to swim from the Gulf of Mexico to the Pacific Ocean right over the Rocky Mountains!