I don’t like talking about business on my blog.

Honestly, the business part of what I do isn’t really that interesting compared to the traveling. I don’t travel to have a business, I have a business so I can travel. Nonetheless, about once a year I allow myself the indulgence to write about the business side of what I do. It is a frequent question I get from people who I meet on the road and from people who discover my site.

Earning a living online is so different from what people are used to, they often don’t know what to make of it. So, if you are curious, here is a peek behind the scenes at how I deal with the non-traveling side of things…

This is the one question I am always asked is, “How do you make money?”

It is a fair question, and the honest answer is: so far I haven’t.

I’ve been working on a long term plan for a while now and one of the things I didn’t want to do is sacrifice long term gains for short term profits. I knew I was ahead of the pack and it would take time for the travel and tourism industry to mature to a point where they would work with bloggers.

I focused on building my audience and didn’t worry about the money. I knew if I did the former, the later would surely come.

2012 is looking to be the year where I finally turn a profit. I have several projects that will be launching next year: 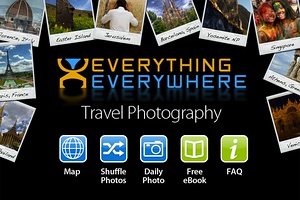 Working With The Travel Industry

The biggest difference between travel blogging and other niches is that travel blogs exist in an enormous industry. Travel and tourism is over a $1 trillion business world wide. There are travel sections of every major newspaper in the world, huge travel magazines, entire publishing companies devoted to travel, and of course there is even a travel channel.

Travel also isn’t free. I can’t just wake up every morning and think of something clever at the kitchen table. I have to get out and actually DO things.

Most of the people I work with are government tourist boards. They are non-profit organizations who’s mission is to get people to come visit their country/city/region. One way they do this is by hosting journalists who visit their region.

One advantage I have being a permanent traveler is that I don’t have any fixed costs. I don’t have a mortgage, utilities or other expenses to worry about. Where as many bloggers just focus on revenue, I have a great deal of ability to reduce my costs as well. Profit of course is revenue minus costs. By working with tourist boards and not having a home, the funds I need to travel are significantly less.

The travel industry has been slower than other industries to work with bloggers, whereas fashion and mommy bloggers have gotten much more buy in from their respective industries. I think much of the reluctance in the travel industry stems from the large travel media industry they have traditionally worked with. The travel industry is also much larger with lots of mom and pop hotels.

Things are changing however, and I expect it change even faster in 2012.

This time last year, Everything Everywhere was a one man operation. Today I have a few more people helping me out. The biggest impact has been from my assistant Amy. I’ve known Amy for over 10 years and I was visiting her earlier this year in Texas and she suggested she could help me with a lot of the stuff I was working on.

It has worked far better than I had hoped. One of my biggest constraints is time. Not only am I limited by what one person can do, I also have to do everything on the road and squeeze that in between all the exploring and picture taking. Amy has allowed me to focus more on traveling and writing and at the same time has expanded the number of projects I am working on. Amy is the single greatest change in my operation since I started traveling.

One problem I’ve had was finding time to do my email newsletter. I got an intern, Brendan, who has been compiling it every 2 weeks for me. That has been a huge help as well.

I also took on a manager this year who helps me with corporations and sponsorships. It has taken a while for things to get off the ground, but I think we are figuring out what works and what doesn’t. There is a lot of trial and error involved and also education that has to take place because most companies have no clue how to work with bloggers.

With more backend stuff taken off my hands, I’ll have the ability to write more and take more photos in the future.

I also hope to get a regular graphic designer to help me with projects including upgrading my free travel photography ebook. I hope to double the size of the next edition and make it more compatible with the iPad and Kindle Fire….and it will still be free!

I currently host my site at Media Temple and so far I’ve had no major complaints with them. They host a lot of large sites, so they have more than enough resources. I pay more than I might with a smaller host, but it is worth it. I’ve also shifted my DNS hosting to Cloudflare this year which was a good move. They provide some caching as well as filtering out malicious attacks and they do some limited caching.

My site was hacked earlier this year, which caused me a lot of grief. I now pay for a service from sucuri.net which checks my site for malware and will fix any problems that might arise.

I spent a lot of time this summer improving the load speed of my site. It has always been a big issue for me. I increased the load time from over 7 seconds to about 1.5 seconds, which I am pretty happy with.

My next big change will be putting a white box around all my articles so I can have black text on a white background. it is the one thing that I’ve had people constantly complain about and I figure it is time to fix it.

For the most part, the technical end of things is something that I don’t think about anymore. Things are running smoothly.

By far, the biggest problem I face is time management. I noted this problem in a post I made back in 2009 and things haven’t changed. If you are sitting at your computer, you aren’t out exploring. You can’t travel and blog at the same time.

I’ve had several periods this year where I was in a different room every night. That pace just isn’t sustainable, but often necessary when you work with tourist boards.

This year has probably been the most hectic travel year I’ve had since I started. I didn’t do as much in 2010 because of my father passing away and I think I over compensated in 2011. In 2011 my pace of travel outstripped my pace of writing. I have literally dozens of stories in my to-do list. I could lock myself in a room for a month and still have stuff to do when I got out.

I’m going to change how I travel in 2012. I’m going to try and pick a local base and try to stay there for a month or more and do occasional short side trips. In February, after my trip to Antarctica, I’m going to be doing this in Belize. I’ll be getting an apartment and then taking some short trips to places in Mexico and Guatemala. I think this will be a much less tiring way of doing things.

While I didn’t start traveling to create a business, I’ve been very fortunate that it has evolved into one. I maintain that I have the best job in the world. I’m doing what I love and I have no desire to stop exploring the world.

As the blog and the business mature, things are changing, but the fundmental love I have for travel is still there.

I hope to continue sharing my adventures with the world and encouraging people to travel for years to come.

If you have any questions about my business, feel free to ask them in the comments.

59 thoughts on “The Business of running a Popular Travel Blog”