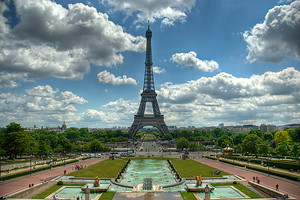 Some Japanese have a vision of Paris which comes from fashion magazines, television and movies. They assume everyone is thin and wears designer clothing all the time. When they arrive, they are shocked to see normal looking people wearing normal looking clothes. The added problems of cultural shocks, language differences and jet lag can result in some people becoming dizzy, depressed and having breakdowns.

This effects an average of one Japanese tourist to Paris each month.

I guess that none of you reading this have ever suffered something so severe from visiting a place. I’m also guessing that most of you, myself included, have been disappointed by some place you’ve visited.

When I began traveling in 2007 I started in the Pacific. I had vision in my head of what it would be like based on books I’ve read and photos I’ve seen online. When I arrived it wasn’t what I thought it would be. It wasn’t worse necessarily, but it was different. The fact that it didn’t match my expectations was in some respect a bit of letdown, but one which was soon overcome.

Whenever I hear people complain about a place they’ve visited, especially famous or popular places, it almost always seems to be a case of not having their expectations met, not so much about the place they visited actually being bad.

Later in 2007 I visited the island of Rennell in the Solomon Islands. Rennell is an island which gets very few visitors to begin with, and while I was there I asked if I could go down to the old beach where ships used to dock. The landing beach was replaced because the old one required a climb up 100m of steep, slippery stairs to get to the top of the cliff where everyone lived. I was told no one had been down to this beach in years. It was the closest thing to a pristine untouched beach that I’d probably ever find.

When we got down to the beach I was shocked at how messy the beach actually was. With no one to do any beach combing, the sand was littered with driftwood, shells and seaweed. That mess of ocean debris WAS the natural state of a beach. The vision I had in my head of a perfect white sand beach had nothing to do with reality. Those images I had in my head were taken by people trying to sell the concept of a beach, which is difficult to do if it is littered with seaweed and wood.

The best way to ensure you aren’t disappointed when you go on a trip is to keep your expectations in check. If you haven’t been somewhere before, it will be different from what you expect. The key is to know this before going and accepting the reality of what you experience.

Paris has people who are fat, manhole covers, cloudy days and graffiti. None of those things will be seen in the pages of a fashion or travel magazine, but they are just as much a part of Paris as the Eiffel Tower and the Louvre.

What place that you have visited differed the most from what you expected?