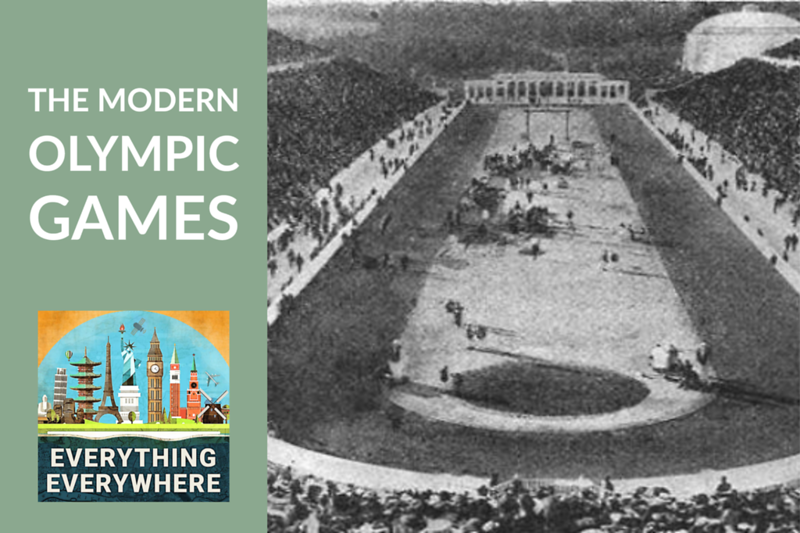 Almost 2,800 years ago the Ancient Greeks held a sporting event every four years on Mount Olympus.

The festival was part competition, part religious celebration, and it was considered so important that wars would come to a halt in honor of the games.

Then in the 19th century, one man came up with the idea of bringing the games back to life.

Learn more about the Modern Olympic Movement on this episode of Everything Everywhere Daily.

If you plan on watching the Olympics, you might want to get some background on the games you’ll be watching.

CuriosityStream has programs on the Olympics, ancient Greece, and many individual sports. That is on top of the over 2,000 educational programs on a wide range of other subjects.

The Olympics gets their name from Mount Olympus, which was the legendary home of the Greek gods. According to Aristotle, the first Olympics were held in 776 BC. This date is mostly accepted by historians and archeological evidence. If it isn’t accurate, then it is probably close.

The competitors came from city-states and kingdoms from greater Greece, who all held the same religious beliefs and pantheon of Gods.

The first Olympics only had one event, called the Stadion. This was a running event with a distance of about 190 meters. The Greek word “Stadion” is where the word English word “stadium” came from.

Over time other events were added including wrestling, discus, javelin, long jump, shot put, equestrian, and one event called pankration. Pankration was sort of a mixture of boxing and wrestling and it was probably closer to modern-day mixed martial arts.

I should note that all of the ancient competitors and spectators were men, and everyone competed naked.

The Olympics continued through most of the Roman period and didn’t formally end until the year 393 when the emperor Theodosius I outlawed all paganism and pagan rites.

The Olympics were never really forgotten, but it was just a historical note, not something that anyone had any real desire to resurrect.

The term Olympics began being generally used for organized athletic events. There were 17th-century games in England called the “Cotswald Olympics”.

During the French Revolution, there was an event called the L’Olympiade de la République.

Throughout the 19th century, the term began being used for a whole host of athletic events throughout Europe. However, none of them have any connection to the modern-day Olympics.

The modern Olympics can trace its roots back to a French Barron named Pierre de Coubertin.

Coubertin was an academic who was an advocate of athletic activity as means of good health.

In 1892 he came up with the idea of holding an international athletic festival that would serve as something for people to aspire to. Specifically, he wanted to revive the ancient Olympic festival, and like the ancient games, hold them every four years.

Unlike the original Olympic games, these new Olympic games would be open to people from all countries on Earth.

In 1894, at the Sorbonne in Paris, he held an international conference on sports which was attended by 79 delegates from 9 countries. They unanimously approved the creation of the International Olympic Committee or the IOC.

The IOC then agreed to hold the first Olympic Games in Athens in 1896. Athens was selected to honor the ancient games which were also held in Greece.

The first games had representatives from 14 nations, with 241 athletes who competed in 43 events.  All of the nations represented were from Europe, save for the contingent from the United States.

A full 65% of the athletes in the first Olympics were from Greece.

The medals given out at the first games were silver to the winners, and copper to the runners-up. These were later retroactively changed to gold, silver, and bronze to reflect the current medals.

Overall, the first Olympics were considered a success.

However, that wasn’t the case for the Olympics which followed.

The 1900 Olympics were held in Paris alongside the Paris World’s Fair, and if you’ve listened to enough episodes, you’ll probably now realize that Paris held a lot of world’s fairs.

The 1904 Olympics were in St. Louis, held alongside the St. Louis World’s Fair. I addressed the St. Louis games in my episode about the 1904 marathon, which was the worst event ever held in Olympic history.

Both 1900 and 1904 didn’t get much attention or publicity. They were overshadowed by the larger events they were held with, and they were more of an afterthought by the event organizers.

The 1900 games in Paris did have the first women participate as competitors. There were 22 women who competed in five events: tennis, sailing, croquet, equestrian, and golf.

In 1906, another Olympics was held just two years after the St. Louis games, and this one was again in Athens.

Because it was held only two years after, it was called the Intercalated Games.

These games were much more popular than the previous two, but they were later retconned to not be an official Olympics by the International Olympic Committee. You won’t find the 1906 Olympics on any official list of past Olympics.

As the Olympics expanded, there were more events added. At the 1908 Summer Olympics in London, one of the events was figure skating. Skating was held several months after most of the event in October, but it was considered part of the Summer Olympics.

Likewise, one of the shooting events was Olympic Dueling. Contestants fired dueling pistols at dummies at 20 or 30 paces.

1908 also saw the creation of standard rules for events, and international committees, judges, and officials to oversee the events. Prior to this, it was always done by the host country.

However, the Olympic definition of amateur eventually became extremely draconian over time.

At the 1912 Olympics in Stockholm, American Jim Thorpe won gold medals in both the decathlon and pentathlon. But because he received $2 per game for playing baseball, a sport which wasn’t in the Olympics, two years earlier, he was stripped of his medals.

1912 also saw the addition of an art competition to the Olympics. Art was a feature of the Summer Olympics until 1948. The events each year varied, but they usually consisted of literature, music, architecture, painting, and sculpture.

The 1916 Olympics, which were scheduled to take place in Berlin, became the first Olympics to be canceled due to the First World War.

After trying to include figure skating and hockey at the 1920 games in Antwerp, the IOC agreed to hold a separate winter Olympics in 1924 in Chamonix, France.

By this time, the Olympics had clearly become the premier international sporting event. Winning an Olympic medal was considered the highest accomplishment in most sports.

Politics began to insert itself into the Olympics in a way it hadn’t in the past. Munich was the host in 1936, and the German government, led by Adolf Hitler, used the games for propaganda purposes.

The Second World War canceled the 1940 games, which were scheduled to take place in Tokyo. It would have been the first Olympics held in Asia.

Likewise, the 1944 games which were scheduled for London, were canceled as well.

After a 12 year hiatus, London finally held their games in 1948. Germany and Japan were not invited to these games, and the Soviet Union choose not to participate.

Despite their absence, there were 59 countries represented in 1948, which was the most of any Olympics.

Over the next several decades, there were two large-scale trends that dominated the games: The increasing number of countries represented as more countries became independent via decolonization and the use of sports as a proxy for national competition during the Cold War.

By the 1976 games in Montreal, 96 countries were represented.

The end of the Cold War resulted in significant changes for the Olympics. In 1992, professional athletes were finally allowed to compete. While they didn’t make any money from the Olympics itself, they were able to make money from endorsements and from other competitions.

1992 also saw the last year the Winter and Summer Olympics were held in the same year. Beginning in 1994, the winter and summer games are now always held two years apart.

Today, hosting an Olympics has become an enormous undertaking. In the past, cities fiercely compete to host an Olympics because of all the international prestige which came with hosting the games. However, the requirements for hosting have skyrocketed.

The cost of hosting the 2016 Olympics in Rio de Janeiro was estimated to be over $13 billion dollars. It took the city of Montreal 30 years to pay off its debt from hosting the 1976 Olympics.

The hosts for the 2028 and 2032 Olympics have already been announced: Los Angeles and Brisbane. In both cases, they were the only city that was in the running and they basically were awarded the Olympics by default.  No one else wanted to host the games.

Today there are proposals for permanent Olympic host cities. There would be one city in Europe, Asia, and North America which would rotate hosting the Olympics, and then every fourth Olympics it could be held somewhere else.

Each of the permanent host cities wouldn’t have built new facilities each time, and it would reduce the cost of hosting the games. One of the reasons why Los Angeles was willing to host the Olympics again is because almost everything needed was already built.

The Olympics are now a multibillion-dollar affair. Television rights, marketing deals, and licensing make the modern Olympics a totally different beast than Pierre de Coubertin ever could have imagined. There are more sports, more countries, more athletes, and more money involved than ever before.

Nonetheless, even for multi-millionaire athletes, winning an Olympic medal is still the pinnacle of athletic success.