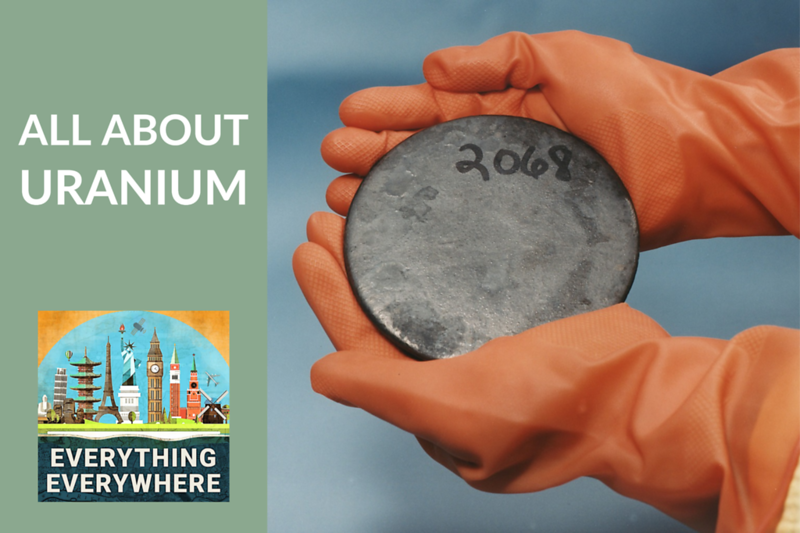 Every element on the periodic table has a completely different story. They behave differently, they exist in different abundances, and humans have totally different uses for them.

One of the most controversial elements, if that is in fact a thing, is uranium.

Uranium can provide power, it can cause destruction, and most people really don’t understand it.

Learn more about uranium, the last of the natural elements, on this episode of Everything Everywhere Daily.

It starts with hydrogen at 1, helium at 2, and keeps going up going through all of the elements you’ve heard of.

The very last of the elements you will find in nature, and hence the heaviest natural element, is uranium. Uranium has an atomic number of 92. There are two natural isotopes of uranium, and both of them are unstable and weakly radioactive. More on that in a bit.

We know that humans were using uranium at least 2000 years ago. There is evidence of the Romans using uranium ores in ceramics and glasses. One of the uranium oxides is a bright yellow color and does a good job adding color to crafted objects.

Uranium is also part of the mineral pitchblende which was historically used in glassmaking.

Silver miners in the Czech Republic would often come across pitchblende when following a silver vein, but only when the vein ended. They gave it the name pitchblende, which basically means “bad luck rock”.

Uranium was first identified by the German chemist ??Martin Heinrich Klaproth in 1789. He wasn’t able to produce a pure uranium metal, but he did know that the element in the chemicals he created was a brand new element.

He named this new element after the recently discovered planet Uranus, which was discovered eight years earlier.

A metallic form of uranium was finally created in 1841, but the substance remained mostly a chemical curiosity. There wasn’t a whole lot of use or demand for the substance.

In 1896 French physicist Henri Becquerel discovered radioactivity when placing a uranium compound next to some photographic film in an envelope in a closed drawer.

Here I should take a moment to describe the radioactivity of Uranium.

Uranium is a weakly radioactive element. I say weakly because if you remember back to my episode on radiation, the longer the half-life of a substance is, the less radioactive it is. You can think of it like burning something, The faster it burns, the hotter it burns.

So too with radiation, the shorter the half-life, the more radioactive it is.

Uranium has two naturally occurring isotopes. An isotope is an atom with a different number of neutrons.

The two isotopes Uranium are Uranium-238 and Uranium-235. The numbers reflect the combined number of protons and neutrons in the nucleus of the atom.

There is a third isotope called U-234, but it is in such extremely small quantities that we can dismiss it.

In 1939, German chemists Otto Hahn and Fritz Strassmann discovered that when uranium was bombarded with neutrons, the atom actually split into lighter elements.

Enrico Fermi, who was working at the University of Chicago, hypothesized that if uranium released enough neutrons when it split, that it could sustain a chain reaction.

Later in 1939, he discovered just that. Every time a uranium-235 atom split, it would eject on average 2.5 neutrons. Those neutrons could then slam into more uranium-235 atoms, and on and on.

On December 2, 1942, Fermi created the world’s first artificial sustained chain nuclear fission reaction at the University of Chicago, below the stands of the football field.

It was also discovered that when U-238 was hit by a neutron, it didn’t split apart as U-235 did. Rather, it would capture the neutron and turn it into a new element. Plutonium-239. Plutonium-239 can then be split like U-235.

The power of this chain reaction was the basis of the atomic bomb and the Manhattan Project in World War II.  Unlike what Fermi did at the University of Chicago, to make a bomb you need an uncontrolled chain reaction.

The first of the two atomic bombs used in World War II was called Little Boy. This bomb was a uranium-based bomb that consisted of a lot of U-235.

Getting this much U-235 presented a huge problem. As I mentioned before, U-235 makes up less than 1% of all uranium.

Also, I’m talking about these two different isotopes as if they are two different things, but they are both uranium. They look and act and behave the same chemically. The only difference is that one is slightly heavier than the other.

This process is called enrichment, and it is really difficult to do. It is done today by creating a gas called uranium hexafluoride. This gas is then put in a cylindrical tube that acts as a centrifuge. The heavier U-238 will tend to go to the outside, and the lighter U-235 will stay on the inside.

As the gases are separated this way, they go through the process over and over and over, until the end result is that the gasses have different concentrations of isotopes.

This enrichment process is really why it is really hard to make an atomic bomb.

Both a nuclear reactor and an atomic bomb required enriched uranium. However, there is a big difference between the two.

So, if you enrich uranium to increase the concentration of U-235, what happens with the rest of the U-238?

That is called depleted uranium.

Depleted uranium is significantly less radioactive than regular natural uranium because the part with the shortest half life has been removed.

It has several uses which take advantage of its extreme density. Depleted uranium is used as armor in tanks and it is also used in anti-tank ammunition.

In commercial use, it is often used, believe it or not, as radiation shielding. Because it is 68% more dense than lead, it is often used in medical equipment which emits gamma rays. Extremely dense material like lead or uranium is great for blocking gamma rays.

Yes, it is, but if you remember back to my episode on radiation uranium is an alpha emitter. It is emitting large helium nuclei which are very easy to block. The radiation the uranium shielding gives off can easily be blocked by a metal casing.

In the early and mid 20th century there was a brand of glazed ceramic dinnerware called Fiestaware. It was noted for the bright colors of its dishes and bowls. Uranium was used in its glazing in some colors, especially red, up until 1972. You can still purchase vintage Fiestaware, and yes, it is slightly radioactive.

Even though I’ve talked mostly about the radioactive and nuclear aspects of uranium, I should also mention that it is a highly toxic metal, so radiation aside, it probably isn’t something you should be ingesting.

Could there have been naturally occurring nuclear reactors?

The answer is yes.

There is evidence that about 2 billion years ago, in what is today the African country of Gabon, a natural nuclear fission reaction took place at or near the surface. They can tell by the remnant elements which are leftover, which show all the signs of a nuclear reaction.

It would have been a very weak reactor, producing maybe enough heat to create a hot spring, but nonetheless, it was a natural nuclear reaction. Something, which given the levels of U-235 today, would be impossible.

Uranium is a natural element that can be found in seawater, many rocks, and in minute amounts in drinking water. There are probably some atoms of uranium around you, and inside you, right now as you are listening to this.

Uranium gets a bad rap, but that is mostly because people just don’t understand how it works and what it is. If you take the time to learn about it and respect it, you will realize just how valuable and important of a substance it can be.

The associate producer of Everything Everywhere Daily.

Today’s review comes from listener Yeet821 over at Apple Podcasts in the United States. They write:

Thanks, Yeet821. Short but fantastic review.

Remember, if you leave a review, or send me a question, you too can have it read on the show.