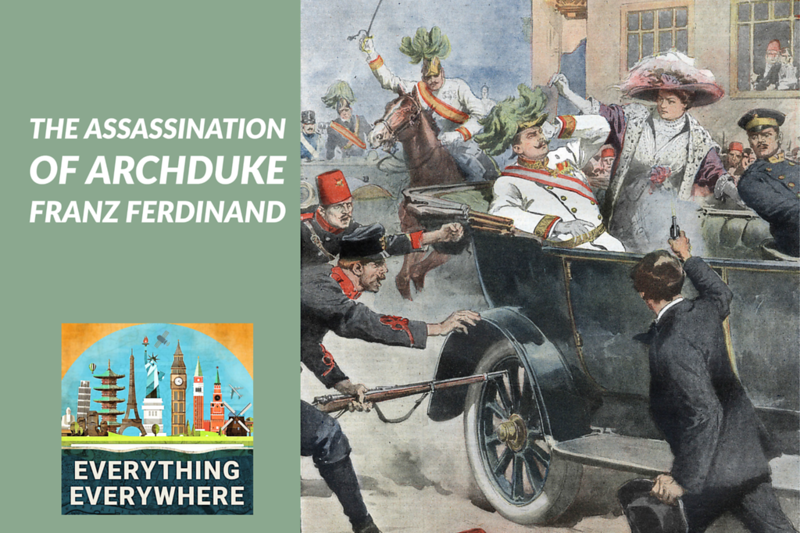 Scientists have coined a term called the Butterfly Effect, where small changes in one thing can lead to enormous changes in systems later on.

Nothing in history exemplifies this more than the series of unfortunate coincidences that occurred on June 28, 1914, in Sarajevo. The repercussions of those events can still be felt around the world today.

Learn more about the assassination of Archduke Franz Ferdinand on this episode of Everything Everywhere Daily.

As the name of the company might imply, Scottevest has great vests and jackets. However, they have lots of other clothing too.

In particular, they have great pants. I know this because I’ve worn Scottevest pants on my travels, and I never once had an issue with theft or pickpocketing. In fact, Scottevest has a $1,000 pickpocket guarantee if you are pickpocketed while wearing Scottevest gear. (see the website for full details on the offer)

To understand the assassination of Archduke Franz Ferdinand, we need to understand what was happening in Europe in 1914.

Franz Ferdinand was the heir presumptive of the Austro-Hungarian Empire under the then Emperor Franz-Joseph. He was a very unlikely heir to the throne as it required both the suicide of his cousin Prince Rudolf and the death of his father to Typhoid Fever.

He was a particularly well-traveled person, having circumnavigated the world in 1898, and spent time in Australia and the Pacific. He was also one of the wealthiest people in Europe having been named the heir of the Duke of Modena in Italy.

Europe, at the time, was dominated by a few large countries, and in particular, in Eastern Europe, the Austria-Hungarian Empire dominated a large part of the map.

Serbia and Montenegro were independent, but other southern Slavic lands, such as Bosnia, were part of the Austria-Hungarian Empire. Bosnia had been annexed to Austria-Hungary in 1908, which sparked outrage by many Slavs living in the region and in Serbia.

There was a movement to join all of the Slavic people in the Balkans into a single country called Yugoslavia, which means Southern Slavic Land.

In Serbia, the monarchy, which had been friendly to the Austro-Hungarians was violently overthrown in 1903 and a more nationalistic king was installed. (and I do mean violently. The king was shot 30 times, he was then disemboweled, stripped, and thrown out a window on to a pile of manure).

The new regime was much more antagonistic to the Austrians, much more friendly to the Russians, and much more supportive of the separatist groups within the Austrian-Hungarian Empire.

One of these groups was called the Black Hand. They were established in 1911 for the creation of a Greater Serbia. They explicitly advocated the use of terrorism to bring about their goals and were by far the most violent and extreme of the separatist groups in Bosnia at the time.

There is one other thing I should mention before I get into the events of June 28. Franz Ferdinand’s wife.

His wife Sophie came from an aristocratic family in Stuttgart, but she was not from a royal dynastic family. Their marriage was known as a left-hand marriage or a Morganatic marriage, which is a marriage between people of different social rank.

When they wed, Emperor Franz Joseph refused to attend the ceremony and declared that any children from the union would not be in line for the throne.

What this meant is that during official functions, Sophie could not be seated next to Franz Ferdinand for most official events. However, there was an exception to the rule. When acting in a military capacity, and Franz Ferdinand was a general in the Austrian-Hungarian Army, she could be seated with him in public.

It was in this environment that Franz Ferdinand arrived in June 1914 when the Emperor asked him to review troops in Bosnia in his military role as a general.

Prior to the visit to Sarajevo, the Black Hand had decided was looking for a target in the imperial government to attack. They were going to try to kill the governor of Bosnia but then decided on Franz Ferdinand.  In March they began their planning.

The Black Hand leader in Sarajevo, Danilo Ili?, organized and recruited the team of assassins. They picked up weapons in Belgrade and positioned themselves in Sarajevo.

On the morning of June 28, the Archduke and his wife were staying outside of Sarajevo at a spa. In the morning they and their entourage entered several automobiles and headed into the city to inspect some military barracks. From there they would attend a reception at the Sarajevo town hall.

Franz Ferdinand and his wife were both in an open-air car, and his wife, which normally couldn’t sit next to her husband, was able to because the Archduke was in his capacity as a military officer that day.

Six Black Hand assassins were assembled along the motorcade route next to the Miljaka River. Each was equipped with a bomb and/or a gun, and a cyanide pill.

As the caravan turned down the street, the first assassin with a bomb failed to act. The second armed with a bomb and a pistol also didn’t do anything.

The third assassin managed to throw his bomb at the car with the Archduke, but it bounced off the back and blew up under the car behind them, disabling it, injuring about 15 people, and putting a large hole in the street.

The assassin then took his cyanide pill and jumped into the river to kill himself.

Unfortunately, the cyanide pill was old and didn’t work, and the river was only 13 centimeters deep, so the police caught him immediately.

The cars then sped up to get to the town hall, and the other three assassins weren’t fast enough to act.

Once they arrived at the town hall, the Archduke interrupted the mayor’s speech saying, “Mr. Mayor, I came here on a visit and I am greeted with bombs. It is outrageous.”

After the formalities, there was debate as to what to do next. One suggestion was for the Archduke and his wife to wait at city hall until troops could be summoned to line the streets, but that was rejected as the troops didn’t have the proper uniforms, and the Governor of Bosnia noted “”Do you think that Sarajevo is full of assassins?”

The plan from city hall was to go to the hospital to meet with those who were injured in the bombing.

After leaving city hall, there was a communication problem with the cars in the caravan. Just a few blocks away from city hall, not far from the bomb attack, the cars accidentally made a right-hand turn.

Coincidently, one of the assassins happened to be standing right at the corner when they turned. As the cars tried to back up to correct their error, 19-year-old Gavrilo Princip jumped up on the running board of the car and fired two shots. One went into the neck of the Archduke severing his jugular vein, and the other into the abdomen of his wife Sophie.

They were both dead within minutes.

Princip tried to shoot himself, but police were on him almost immediately.

What happened was certainly a tragedy, however, if I can be totally blunt, other members of the European nobility have been assassinated, and we don’t really remember most of those events.

What made this assassination different was what happened afterward.

Serbia made a statement that Austria shouldn’t have known this might happen but then retracted it. Austria asked for Serbia to investigate the matter, but Serbia said it had nothing to do with them.  Things escalated rapidly and exactly one month later on July 28th, the Austro-Hungarian Empire declared war on Serbia.

This act set off a chain reaction of alliances and treaties throughout the continent.

Russia began to mobilize to support Serbia. Germany told Russia to stop and ended up declaring war on Russia.

France had a treaty with Russia, so Germany preemptively declared war on France and went through neutral Belgium…..which had a treaty with the British, which brought them into the war. This then lead to Japan, Italy, and eventually the United States, and all the British colonies being thrown in as well.

It was the start of the first world war.

An argument can be made that the assassination of Franz Ferdinand was the most significant event of the 20th Century.

It wasn’t necessarily the greatest event of the 20th century, but almost every major event over the last century can be tied directly to the results which stemmed from that shooting in Sarajevo.

Maybe WWI might still have happened. Maybe some other spark might have set it off. But the assassination is what happened, and it is the starting point for a series of horrible events that took place in the 20th century.

As I noted in the introduction, the butterfly effect can be a powerful thing and the entirety of world history can be changed by someone taking a wrong turn down a street in Sarajevo.