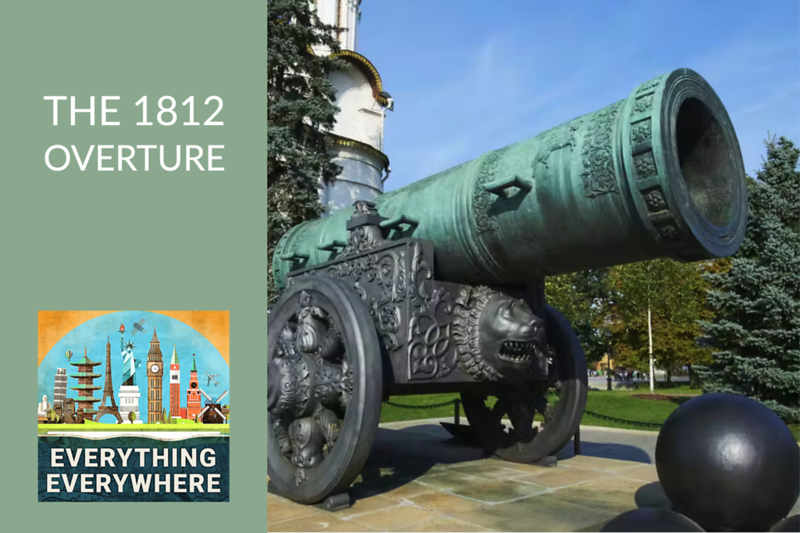 In 1880, the Russian composer Pyotr Ilyich Tchaikovsky was commissioned to compose a work in honor of the completion of a new cathedral.

What he wrote became one of the best known, over the top, and difficult to produce pieces of music in history. Despite its popularity almost 150 years later, the composer actually thought it was one of his worst works.

Learn more about the 1812 Overture, how it was created, and just how crazy it actually is to properly perform, on this episode of Everything Everywhere Daily.

In 1812, Napoleon Bonepart and his French army invaded Russia in a disastrous attempt to capture Moscow. Prior to taking Moscow, the French and the Russians fought at the Battle of Borodino where there may have been as many as 100,000 casualties on both sides

After the pyrrhic French victory, they entered Moscow only to find that most of the city had been burned to the ground, and there weren’t enough supplies for them, which forced them into a long agonizing retreat.

Upon their retreat, the Russian Tsar, Alexander I, commissioned the construction of The Cathedral of Christ the Saviour in Moscow, to be built in honor of the victory.

Fast forward, 68 years later to the year 1880. The cathedral was finally nearing completion, in 1881, Russia would be celebrating the 25th anniversary of the coronation of Tsar Alexander II, and in 1882 there was going to be a huge industrial exhibition in Moscow.

Tchaikovsky was commissioned to compose something that could be used for all the events. He didn’t actually like the cathedral and he wasn’t a fan of the Tsar, so he took the 1812 victory over Napoleon as his theme.

He began work on the composition on October 12, 1880, and managed to complete it just six weeks later.

What he wrote was….. audacious. It was big. It wasn’t just something that was written for an orchestra. It had instruments and volumes which hadn’t been seen in music before or since.

So what made this composition so different?

When a composer writes a piece of music, they include what is known as instrumentation. This is nothing more than a list of all the instruments which are required to perform the piece.

As with most musical compositions, it had brass woodwinds, and strings. However, the instrumentation also had other things.

For starters, in addition to an orchestra, the instrumentation required an entire brass band or marching band.

On top of that, one of the instruments was a carillon, or as it is pronounced in England, a carillon.

If you aren’t familiar with a carillon, it is a bell tower with multiple bells that can play music. There aren’t many of them in the world, and they aren’t the sort of thing you can just put in an orchestra hall. They are permanent structures, usually associated with a church or a university.

There are almost no live performances of the 1812 Overture which use a carillon or even church bells. Most orchestras will just use chimes, which to be honest, does a good enough job.

The big thing, however, which really sets the overture apart from everything else, and the thing that it is best known for are cannons. In particular 16 muzzleloading Napoleonic cannons. More on the use of cannons in a bit.

The plans for the premiere performance were that it would be performed outdoors in front of the cathedral. A special electrical device would be created to fire the cannons because otherwise, you couldn’t time the firing properly if you fired them with flame.

Another thing that was planned was that church bells all over Moscow were going to be rung at the same time, on cue.

Finally, a marching band would join the orchestra on cue as well.

It was going to be a massive production. In fact, one of the biggest musical productions in history.

However, it never happened.

The primary reason for the cancellation of the performance was the assassination of Tsar Alexander II.

This put the finalization of the cathedral on hold, as well as the surrounding festivities.

In the end, the world premiere took place in 1883 inside a tent near the unfinished cathedral, with a fraction of the production value of what was originally planned.

Everyone has a homework assignment for this episode. I would like you to go and listen to the 1812 Overture after you are listening to this. It is only about 15 minutes long.

There are several other pieces of music that are used within the overture. If you aren’t Russian, in particular a 19th-century Russian, you might not even be aware of them.

The piece starts out with a rendition of an Orthodox hymn by the name of “O Lord, Save Thy People”. In the overture, it is usually performed with strings: four cellos and two violas.

However, because it is a hymn, it is sometimes performed by a choir, which just adds to the complexity and production of performing it.

Here is what it sounds like in a normal performance.

For comparison, here is what the hymn sounds like when sung in Russian.

The hymn is intended to invoke peaceful people living in their villages.

The second musical work which is found inside the overture is the French national anthem, the Marseillaise. This is used several times to pretty obviously invoke the presence of the French forces.

Historial fun fact, during the reign of Napoleon, he actually banned the singing of the Marseillaise, which was the national anthem after the French Revolution. So, in 1812, this wouldn’t have been the French anthem.

However, because it is so well known and associated with France, it served its purpose as an audio cue.

The final musical work within the 1812 Overture is the Imperial Russian National Anthem, “God Save the Tsar”.

Here is how it is used in the overture.

And here is what the anthem sounds like on its own.

Since the publication of the 1812 Overture, it has become one of the most popular works of classical music of all time.

However, because of the unique requirements which Tchaikovsky laid out, it is almost never performed as it was envisioned.

The first recording of the overture took place by the Royal Albert Hall Orchestra in 1916. This performance didn’t even bother to try and use cannons, and neither did any other contemporary recordings.

The first real attempt to actually try and make a recording that was faithful to the vision set out by Tchaikovsky took place in 1954.

The Minneapolis Symphony recorded a version using actual cannon fire from a Napoleonic era cannon, an actual carillon, and an actual brass band.

The way they did it was by recording all of the hard parts separately.

The cannons were recorded at the West Point Military Academy in New York. The cannon which was used was an actual French muzzleloading cannon built in 1775.

They actually fired the cannon multiple times to get an explosion that sounded good, changing the amount of powder and microphone position.

The carillon parts were recorded separately at the Yale University carillon.

All of these separate recording were all then combined in the studio to create the version which was the closest up until that point to what Tchaikovsky wanted.

This 1954 recording was published on Mercury Records and it is available on Spotify today. One side of the record is the performance and the other side is a short commentary explaining how they did it.

In 1958, this album was remastered with a different carillon recording and it was published in stereo. In fact, it was one of the very first stereophonic recordings ever released on vinyl, which made it a landmark recording, and it sold well enough to become a gold record and the best-selling classical recording of the 1950s.

It also set the expectations for future performances of the 1812 Overture very high.

An orchestra couldn’t just use a kettle drum in place of the cannons. People expected cannons.

There are two ways that most orchestras replicate the cannon fire.

The first way is to use an actual explosion. They will use a very small cannon that can fit on a desk. These will usually fire blanks and make a pretty big sound indoors, as well as give off some smoke.

The other way is to pipe in the sound of cannon fire over loudspeakers.

There is of course a third way, and that is to use an actual honest to god cannon.

This was popularized in 1974 when the Boston Pops conducted by Arthur Fiedler performed the 1812 Overture for a 4th of July concert.

As the performance was shown around the United States, it began a tradition of performing the 1812 Overture on Independence Day.

The piece is performed both by orchestras and via recordings, and one of the reasons it is so popular is that it goes really well with fireworks.

Most Americans mistakenly think that the 1812 Overture has something to do with the War of 1812 that the Americans fought against the British.

The 1812 Overture has also become a popular piece for military bands to perform because, well, they have cannons. Just doing a cursory search on YouTube I found performances done by military bands in Norway, South Korea, the United States, Taiwan, and Russia. I’m sure there are many more.

In 1990, in a celebration of the Tchaikovsky’s 150th birthday, the Saint Petersburg Philharmonic Orchestra performed the piece for the first time with 16 different muzzleloading cannons, according to his original specifications.

Perhaps my favorite version that I found was by an orchestra from a small town in Spain. The orchestra wasn’t great, but they performed the piece in their town square where they had a bell tower, with some additional bells set up in buildings. They also had small cannons set up on top of some of the buildings in the square.

It was the only version I’ve found that had both actual bells and cannon in a live performance.

Not everyone likes the 1812 Overture. Many classical music snobs look down on it.

Yet, oddly enough, no one hated it more than Tchaikovsky himself.

It bothered him that this had become his best-known composition. He said to his friend which helped him get the commission that  it was “… very loud and noisy, but [without] artistic merit, because I wrote it without warmth and without love.”

Despite Tchaikovsky’s lack of love for the piece, it has become a favorite of music lovers around the world, and a cornerstone of the classical music canon.

Today’s review comes from listener cameron2776  over at Podchaser. They write:

For those on a diet of intellectual stimulation, Gary provides the nepenthe for the vexatious silent days of the weekly podcast: a daily, brilliant, polished, and compelling episode. Any persuasive attempt to trumpet this masterpiece would be inferior to the experience itself. Therefore, I implore anyone to peruse Gary’s catalog and select the title of least interest.  Listen to the episode that should prove impossible for you to enjoy.  Then you shall surely understand. It will be……Magical.  Still don’t believe me? Watch this: Gary is about to say that the origin of magic is deserving of a future episode.

Thanks, Cameron! Ugh…the origin….of magic …is deserving …of a future episode.

Wait. Where am I?

Remember, if you leave a review over at Podchaser until the end of April, and there are only a few days left, they will make a donation to help feed Ukrainian refugees, which will be matched by several other podcast companies.