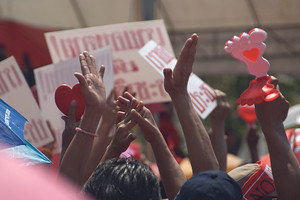 This is just a quick update, because I don’t have time to do a full write up. Yesterday I attended the political protests in Bangkok. I spent several hours walking around the protesters with my camera. Everything was peaceful. Not only was it not an angry mob, it had the atmosphere of a festival more than a political protest. People were bending over backwards to get me to take their picture. The photo of an angry protester shouting just wasn’t in the cards. I’m heading back to take some more photos today, this time I’ll have some batteries for my flash and an extra battery for my camera.

View my collection of photos from the Bangkok protests here.