During my most recent visit to South Africa, I was able to do something I had always wanted to do: swim with great white sharks.

Yes, I’m talking about Jaws. Carcharodon carcharias. Ferocious man-eater of the deep. The world’s most efficient killing machines. Whitey. Chewy. The Warden. The Landlord. The man in the grey suit. Mack. Ol’ Toothy.

…and I got in the water with them! 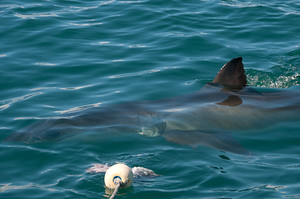 If the title of the post caught your attention, then you are probably not alone. Great white sharks have been on the public’s radar ever since the release of the movie Jaws in 1975. The Discovery Channel now promotes “Shark Week” every year where all of the shows have some sort of shark theme. Every few years news outlets go on a frenzy reporting on random shark attacks. 70% of people surveyed think sharks are dangerous.

I have met people who refused to learn how to SCUBA dive because of their fear of sharks (technically known as galeophobia or selachophobia). The fascinating thing about the fear of sharks is that is it almost totally from images and stories in the media. Very few people have had any first had encounters with sharks, because there are so few shark attacks on humans.

So, despite all the hype surrounding Great Whites I still decided to get in the water with them when I had the chance in South Africa. 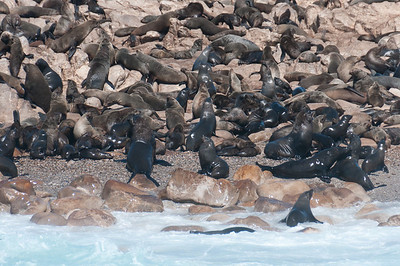 The location we did the shark encounter was off the town of Gansbaai, which is near the very bottom of the African continent. While there are other spots around the world where you can experience Great Whites, Gansbaai is one of the best because of its location. The meeting of the Atlantic and Indian Ocean currents means nutrients and migrating prey.

It also just so happens that just off the shore of Gansbaai are two islands, Dyer Island and Geyser Island, which are populated with penguins and seals. The two islands are only a few hundred meters apart from each other, but one is totally populated with Cape Fur seals and the other is all jackass penguins. There is no mixing of the species.

In between the two islands is “Shark Alley”. 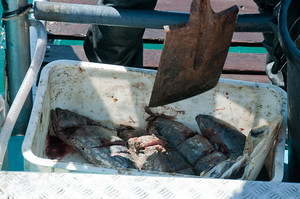 Getting in the water with sharks requires some effort. You can’t just jump in the water and hope for the best.

Getting to the point where you jump in the water could easily be confused with a nature watching cruise. We saw several southern right whales in addition to the penguins and seals on Dyer and Geyser Islands. 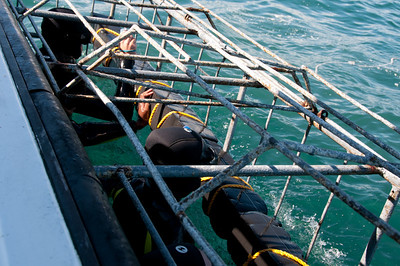 When you get to the buoy, they drop a cage over the side where you get in the water. Most people think you have to wear SCUBA or snorkeling gear when you get in the water, but that isn’t the case. The company we went with, Marine Dynamics, only uses a wetsuit and goggles. When the shark comes by it is near the surface so you only have to duck your head into the water to take a look. Water visibility was around 10-12m when I was there.

To get the attention of the sharks they start chumming the water. They take old, nasty fish, chop it with with a shovel and throw the resulting mush into the water. This will attract sharks via their highly sensitive sense of smell, but to get them exactly where you want them, they also put several fish heads on a rope. They throw the rope out and pull it in near the cage so the sharks come as close as possible to the people in the water.

Even though shark alley has so many great whites, it doesn’t guarantee that you will see any on a particular trip. You also can’t guarantee the behavior of the sharks. During the trip, I was on we had very good luck and no shortage of sharks.

The best one however, was the last shark we saw in the 2 hours we were there. The shark grabbed on to the fish heads on the rope and wouldn’t let go. He breached the surface and even took the rope under the boat. I was in the water for the entire thing! You can see it in the video below. I’m the person in the cage closest to the camera.

If you get the chance to do a shark encounter, DO IT. I had it listed as #3 on my list of my favorite travel experiences. It is perfectly safe and the danger of great white sharks has been overblown by the media.

Watch more video and read the story from Mary Frances Emmons of Sport Diver Magazine who was also with me in the water.

9 thoughts on “Swimming With Great White Sharks in South Africa”