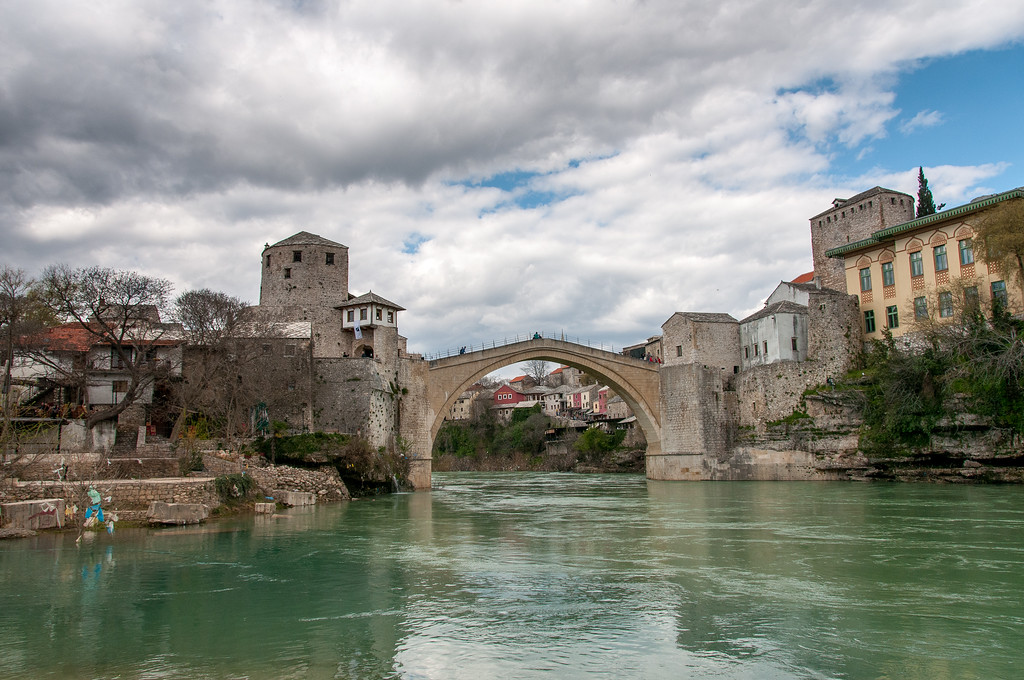 One of the more iconic sites in all of Bosnia and Herzegovina—the old bridge in Mostar—is actually not that old.

At least, the current incarnation of Stari Most is a lot newer than one might think given the bridge’s long history. Originally built in 1557 under the administration of the Ottoman Empire, it was destroyed by Bosnian Croat forces in November 1993 during the shelling of the town. The Bosnian Croat forces later admitted that they purposely targeted the bridge for destruction because they felt it was of strategic importance. (After the war, experts testified that the bridge wasn’t strategically important—the bridge was attacked because of its cultural significance.)

In 1998, UNESCO helped in the recreation of the bridge, which was completed in 2004, and the bridge being listed as a World Heritage Site in 2005.

The scars from the Bosnian War can still be seen throughout the town of Mostar, not just in the history of Stari Most. Bullet holes are still visible in many buildings, and a few still remain gutted. Although there is peace, the city is still divided between Croats and Muslims, a situation unlikely to change anytime soon.

Even given the often difficult history, Mostar is one of the more special cities to visit in the entire region, and it offers a lot to travelers—be it day trippers from Dubrovnik or those staying longer to thoroughly explore the region’s charms.

Why Stari Most is Important

The Old Bridge Area of the Old City of Mostar is cultural UNESCO World Heritage Site in Bosnia and Herzegovina. It was inscribed in 2005 for its post-medieval European and urban landscape that exemplifies the cultural heritage of the region. UNESCO also aimed to preserve and protect the multicultural background of the town that enriched its cultural heritage. This historic bridge is also known as Stari Most.

The town that encompasses the Old Bridge Area of the Old City of Mostar developed during the Ottoman period. The height of the town’s development took place during the 16th century. Since then, the Stari Most serves as a landmark of the town and the name of the town—Mostar—was so named because of the importance of the keepers of the Old Bridge.

The Old Bridge area of the Old City of Mostar, with its exceptional multicultural (pre-Ottoman, eastern Ottoman, Mediterranean and western European) architectural features, and satisfactory interrelationship with the landscape, is an outstanding example of a multicultural urban settlement. The qualities of the site’s construction, after the extremely ravaging war damage and the subsequent works of renewal, have been confirmed by detailed scientific investigations. These have provided proof of exceptionally high technical refinement in the skill and quality of the ancient constructions, particularly of the Old Bridge. Of special significance is the Radoboija stream, which enters the Neretva on its right bank. This provided a source of water for the growing settlement, and from it springs a number of small canals used for irrigation and for driving the wheels of water-mills.

There has been a human settlement on the Neretva between the Hum Hill and the Velez Mountain since prehistory, as witnessed by discoveries of fortified enceintes and cemeteries. Evidence of Roman occupation comes from beneath the present town.

Little is known of Mostar in the medieval period, although the Christian basilicas of late antiquity continued in use. The name of Mostar is first mentioned in a document of 1474, taking its name from the bridge-keepers (mostari ); this refers to the existence of a wooden bridge from the market town on the left bank of the river which was used by soldiers, traders, and other travellers. At this time it was the seat of a kadiluk (district with a regional judge). Because it was on the trade route between the Adriatic and the mineral-rich regions of central Bosnia, the settlement spread to the right bank of the river. It became the leading town in the Sanjak of Herzegovina and, with the arrival of the Ottoman Turks from the east, the centre of Turkish rule.

The town was fortified between 1520 and 1566, and the bridge was rebuilt in stone. The second half of the 16th century and the early decades of the 17th century were the most important period in the development of Mostar. Religious and public buildings were constructed, concentrated on the left bank of the river, in a religious complex. At the same time many private and commercial buildings, organized in distinct quarters, known as mahalas (residential) and the bazaar, were erected.

About Stari Most & the Old City of Mostar

The Old Bridge Area of the Old City of Mostar was built in 1566 based on the design of Kodja Mimar Sinan, who was a great Ottoman architect. His design was built by one of his pupils—Architect Hayreddin. Aside from Stari Most itself, there were also several other important Ottoman structures built in Mostar during the 16th century.

These structures include the following:

Despite these other Ottoman structures, Stari Most—known as the Old Bridge within the of the Old City of Mostar—is one of the most recognizable landmarks not just in the town of Mostar, but also in the entire country. It has been around for 427 years and crosses the Neretva River to connect two parts of the town. It features a humpback architectural style and is four meters wide and 30 meters long.

Stari Most is protected by two towers: the Halejiba Tower and Tara Tower. These two towers serve as “the bridge keepers.”

The arch of the old Stari Most bridge is made with a local stone called tenelija. The unique shape of the arch is not intentional, but rather due to numerous irregularities caused by a deformation in the inner line of the arch. The bridge isn’t built out of a typical foundation, but rather with abutments of limestone. It is linked to the waterside cliffs and is erected at 6.53 meters from the water level. The arch of the bridge rises up to 12 meters in height.

In November 1993, during the Croat-Bosniak War, the Old Bridge Area of the Old City of Mostar was destroyed by the Croat military forces. However, once the war was finished, a project was established in order to reconstruct the Stari Most bridge. By July 2004, it was fully restored and reopened to the public. It was UNESCO and the World Bank, together with the World Monuments Fund and Aga Khan Trust for Culture, that funded and oversaw the reconstruction project so that the world would once again have access to this beautiful, historic, and iconic bridge in Mostar.

How to Get to Stari Most & Mostar Old Town

Mostar is most often visited on a day trip from Dubrovnik—this is probably the easiest way to visit the city since there are tours leaving Dubrovnik daily. Alternately though, it’s very easy to bus to Mostar from Sarajevo, or hire a car if you’re planning a Balkans road trip. The Everything Everywhere team has actually visited the region all three ways, and no matter how you get there, it’s most important that you go!

If you’re sticking around Mostar, there’s actually a lot to see! Here are our three favorite tours for those who have a few days in town:

Before you go, pick up the Bradt Guide to Bosnia and Herzegovina—hands-down the best guide to the country.

View my complete list of UNESCO World Heritage Sites in Bosnia and Herzegovina.