I’ll be honest. I didn’t expect to love my Disneyland adventure. This was my first experience with a Disney park. As a child, I had never gone, and as an adult I expected it to be fun for the children. While I expected my children to love the trip, I didn’t expect that I would treasure my time there. I did expect to have fun, but I thought there would be parts of the trip I had to endure.

We went in early December. This was clearly the off-season which worked to our advantage. The lines to many lines were nonexistent. The times we did have to wait, our wait was minimal. There were some rides we were able to ride multiple times in a row.

One of our children is in preschool, the other is homeschooled so going to Disneyland during the school year was not a problem. However, if our children were in school I would not hesitate to pull them out for a week to take them to Disneyland. The school might call that “unexcused” but I would call it valuable family time. I think that family time should occasionally trump school, especially when assignments can be made up. 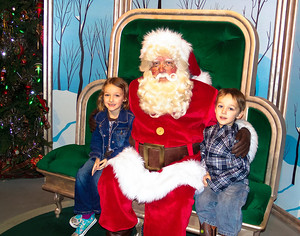 Disneyland at Christmas time is incredible. Everywhere you turn is festivity! They even redo the “It’s a Small World” ride to incorporate Christmas decorations. Santa Claus was on hand, and there was no mall visit required! While there was an official photographer there, and with the characters, we were encouraged to take our own photos as well.

The days were a tad chilly for Southern California, but we popped on our windbreakers and were very comfortable. Two of our days there we had beautiful clear skies. The third day was overcast and threatened to be a rare day of showers, but it never did more than a sprinkle.

I would definitely suggest this time if you can swing it! We felt the combination of off-season and Christmas time made for the best experience possible. However, having not visited Disneyland previously we are only going with my husband’s experiences visiting Disney World in the summer and second-hand reports of long lines at the rides during peak season.

Things at Which Disneyland Excels

One thing is catering to the smaller child. In many of the places, we’ve visited, the height requirements for most of the rides preclude my 42″ inch average sized four and a half year old from riding them.

But Disneyland clearly had kids his age in mind. The majority of rides and activities were open to him at his size. He got his first real experiences with roller coasters at Disneyland, and he absolutely loved them. It was one of the sweetest bonding experiences I’ve ever seen between him and my husband. A mutual love of roller coasters realized at a young age! I know this will shape their relationship and they are already talking about their next trip to an amusement park. 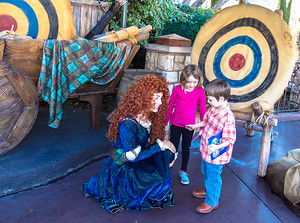 We also found out that my daughter is not a fan of roller coasters. After the first one we tried, my son was jumping up and down jabbering out words that would be roughly translated as “again, let’s do that again!” My daughter looked me in the eye and emphatically said: “I am NOT okay.” There were even hand gestures to further drive her point home. That was not a problem! While dad and Luke ran off to fulfill a need for speed, Claire and I rode the milder rides and had a blast. Disney covered everyone.

Disneyland also has the most consistently great customer service I’ve ever encountered. The cast members got down to the kid’s level to talk to them, and never talked down to them. They were kind and respectful when we dealt with them, and they went above and beyond in each exchange we had.

How to Keep the Expense Down 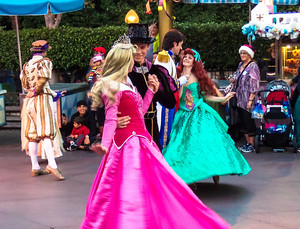 For most vacation budgets, Disneyland is higher than average. It is easy to argue that a visit to Disneyland is worth the expense.  But even when you are sold on the merits of Disneyland, you are probably looking to find ways to keep the expenses down.  Unless you are a princess like these, of course!

We tend to cook our own food to help keep expenses down. If this is the plan, make sure and check what your hotel room offers. For instance, we had a minifridge but no microwave. We found the breakfast offerings in the park to be limited. A good way to save would be having breakfast in your room before hitting the parks.

There are also lots of places for children to spy cool toys they want to take home with them. We flew, so despite having a budget to think of, we also needed to make sure everything could fit in the suitcases. I made a deal with the kids. I would buy them an autograph book, and they could choose one toy to get. That cut down a lot on the begging. Claire chose a Brave Doll. Luke really wanted Hulk Hands (yes.. they are green foam hands that look like Hulk’s). We couldn’t figure out how to get them in our luggage due to the size, and having him wear them on a plane ride didn’t seem prudent. I mean, how many passengers want to sit by a kid saying “Hulk Smash!” and banging on things? So he asked Santa for the Hulk Hands (and he delivered!).  For his one item, he settled on a Mickey Mouse Sorcerer hat. He loves that hat and wears frequently. 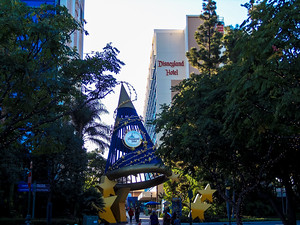 Staying at one of the three Disneyland hotels on property. One of the largest benefits is accessibility. You walk out the door of the hotel and you are in Downtown Disney, mere steps from both Disneyland and California Adventure. This enhances everyone’s experience, and it keeps you from wasting time commuting from an offsite partner hotel.

We also had a fantastic view of the fireworks from our hotel room at the Disneyland Hotel. One thing I will remember always was getting the kids back to the room, getting on their pajamas and laying down on the floor and watching the fireworks at night. We didn’t have to worry about missing them even though our little ones were tired out!

Staying at Disneyland hotels on property also affords you the luxury of Magic Hour. Each day, one of the parks opens an hour early for the hotel guests. This was AWESOME! We were able to rush to the rides that usually had notoriously long lines and ride them first. Our wait time was minimized, and we could experience more rides during the day. At Disneyland, we headed directly towards Fantasyland and at California Adventure we made a bee-line towards the new Cars Land.

A character meal, if your child has a favorite, might be a place to splurge. This is my one Disneyland regret. My daughter missed seeing Ariel at Disneyland, and she was heartbroken. Ariel is definitely her favorite. We should have splurged for a character dinner at Ariel’s Grotto at California Adventure to make sure it happened. I think she’ll remember this disappointment, and I wish I would have chosen differently with this expense.

It was a trip that will remain vivid in our minds for our lifetimes. It was a great experience as a family, and the time we spent together at Disneyland helped our family become closer. We found that we liked California Adventure slightly better than Disneyland, but both were experiences we will treasure. I think we will return to either Disneyland or try out Disney World at some point in the future. We highly recommend a trip to Disneyland with your children during their childhood.  You’ll all have fun, I promise!

Disclosure: We were a guest of Disney during our visit to Disneyland, Disneyland Hotel, and Disney California Adventure.  Despite their hospitality, my views are my own and I make all editorial decisions on this and all other articles on this site.