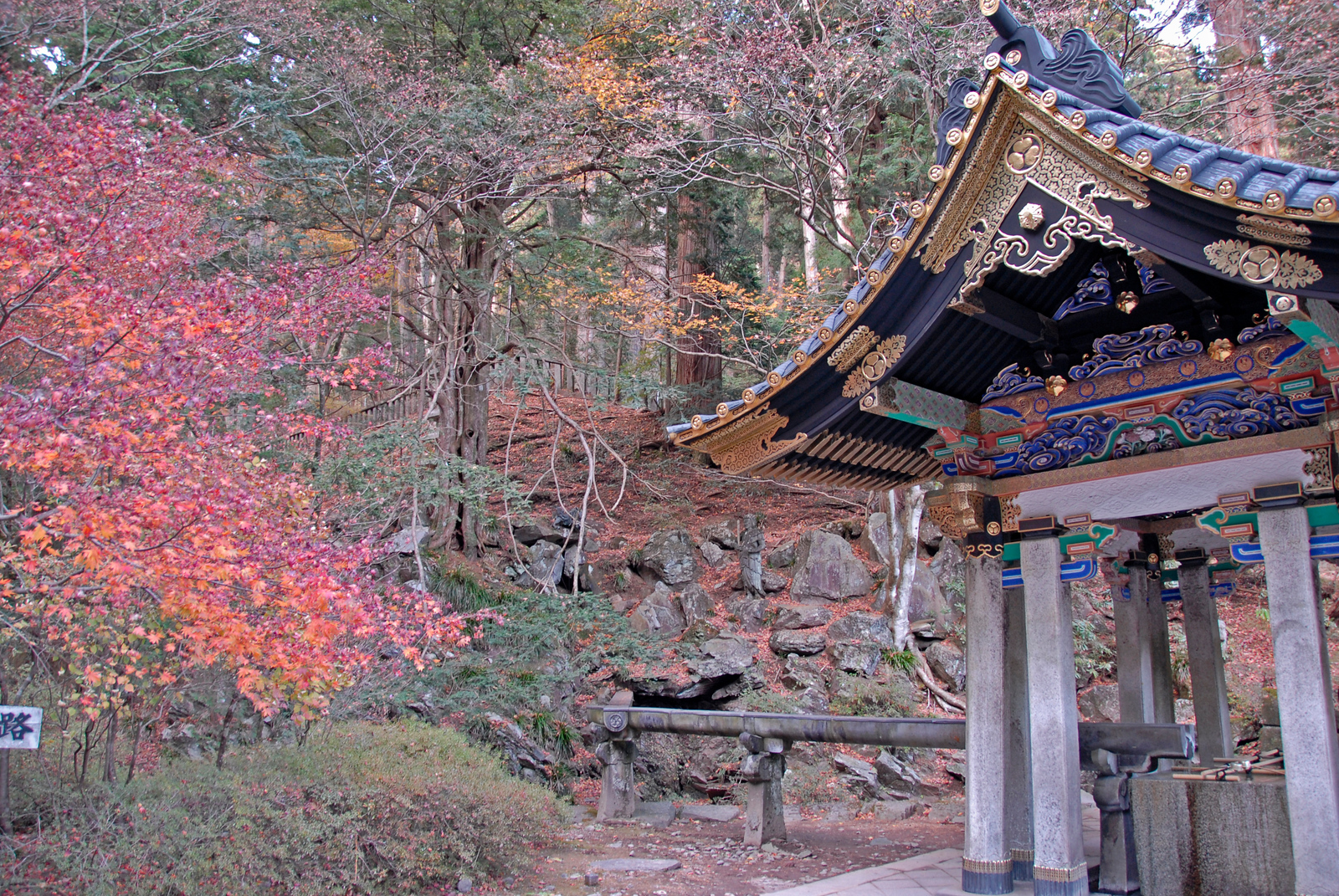 From the World Heritage inscription for the Shrines and Temples of Nikko:

The shrines and temples of Nikko, together with their natural surroundings, have for centuries been a sacred site known for its architectural and decorative masterpieces. They are closely associated with the history of the Tokugawa Shoguns.

Nikko is a day trip from Tokyo. About two hours away by train, half the trip is via shinkansen (bullet train) and the other half is via a smaller commuter train. Nikko is a small town located in the mountains and surrounded by cedar forests. Nikko is a collection of Shinto and Buddhist temples built from the 16th to 19th centuries.

You can walk from the train station to the temple area (I did it) but it will take about 30 minutes and the walk is mostly uphill. There are taxis and buses which can drive you to the temple site. Nikko is world-famous for a small wood carving on one of the temples: the see no evil, hear no evil and see no evil monkeys. While I was there, I saw everyone lined up to get their photos taken in front of the same building acting goofy. I had no idea what was going on. I saw the carving, and together with all the mentions of the monkeys in the stores in town, I figured it out.

Visiting the Shrines and Temples of Nikko from Tokyo takes a full day, but it is probably the best example of traditional shrines and temples you can see within easy traveling distance from the city.

The Shrines and Temples of Nikko comprise of the Toshogu and Futarasan-jinja Shrines. The Rinno-ji temple and the monuments in its surroundings are also included in this particular property under UNESCO World Heritage Sites in Japan.

Toshogu is the location of the enshrinement of Ieyasu Tokugawa who was the first shogun when the Edo Shogunate flourished in the 17th and 19th centuries. More than 127,000 craftsmen were called in to help build the shrine. The “Yomei-mon Gate” consists of two stories and over 500 sculptures, on top of other beautiful and colorful decorations.

There are 103 buildings and structures that were included in this property listing for UNESCO. Of the 103, 9 are National Treasures of Japan and the other 94 are all Important Cultural Properties. You can learn more about the shrines and temples of Nikko below.

If you want to visit the shrines and temples of Nikko, you need to take the limited express train Spacia. Its jumping off point is in Asakusa in downtown Tokyo. Your travel time to get to Nikko would be roughly 110 minutes.

Foreign tourists who are traveling via this express train with a 2-Day pass or All Nikko Pass are entitled to get a discount of 20% on their express fare. About 80% of the tourists who visit the UNESCO World Heritage Site in Nikko are foreigners.

This is another Shinto shrine named as one of the shrines and temples of Nikko by UNESCO. This is where Ieyasu Tokugawa was enshrined in. There are several Tosho-gu shrines in Japan but the one in Nikko is the most famous one. During the Edo period, there are 500 shrines that makeup the Tosho-gu shrines. But after some of them had been destroyed and abandoned, the total number is now down to 130.

This complex consists of 15 Buddhist temples within the city of Nikko. The site was founded by a Buddhist monk in the late 8th century. The temple complex is located deep in the mountains and it helped for the site to flourish as it attracted other Buddhist monks looking for a place of solitude. The most famous building in this complex is the Sanbutsudo or Three Buddha Hall. You can also find the Shoyo-en Garden and Treasure House of Rinno-Ji within the same complex.

1 thought on “Shrines and Temples of Nikko”