From the World Heritage inscription for Historic Monuments of Ancient Nara:

Nara was the capital of Japan from 710 to 784. During this period the framework of national government was consolidated and Nara enjoyed great prosperity, emerging as the fountainhead of Japanese culture. The city’s historic monuments – Buddhist temples, Shinto shrines and the excavated remains of the great Imperial Palace – provide a vivid picture of life in the Japanese capital in the 8th century, a period of profound political and cultural change.

While in Kyoto, a must day trip is a visit to Nara. In many respects, Nara can be thought of as the sister city to Kyoto. It was the capital of Japan before it was moved to Kyoto and also contains many historic shrines and temples. 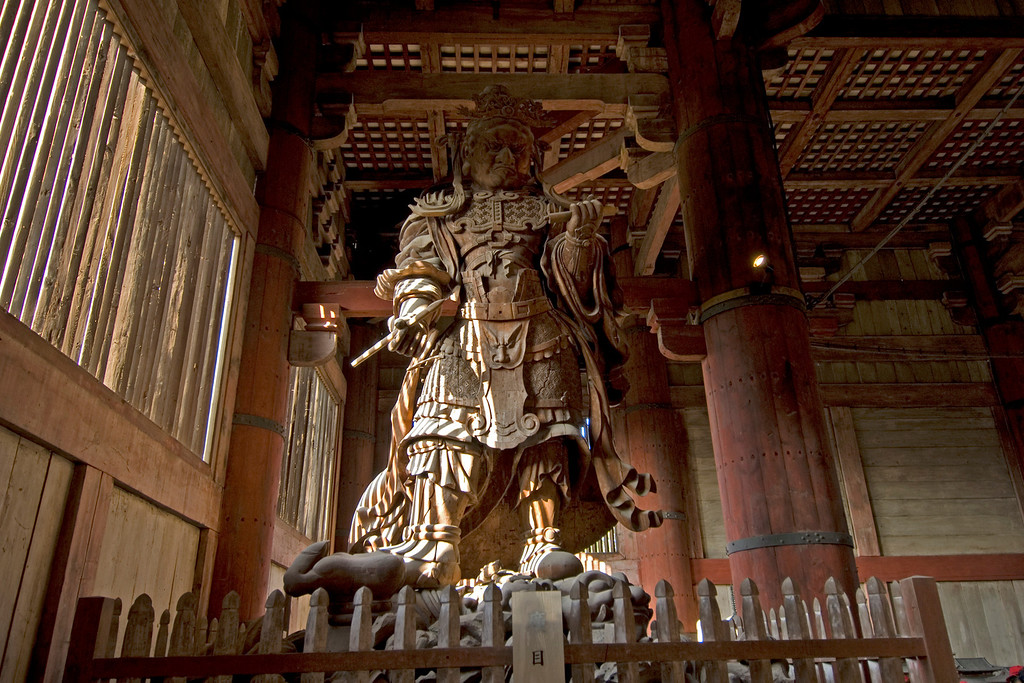 The primary building in Nara is the Todaiji Temple (shown above) which is thought to be the largest wooden building in the world. The temple is home to the largest Buddha statue in Japan: The Daibutsu. The current building was finished in 1709 and replaced an even larger structure which was destroyed by fire.

One of the unique features of the city is the small red deer which roam around freely. If you go to the central park in the city, you can buy small packets of crackers to feed the deer, which are quite tame.

During the early to late 8th century, Nara was the capital of Japan. The framework of the government was still consolidated during this time and it brought about prosperity in Nara. It also earned the status as the focal center of Japanese culture. The historic monuments that were built in Nara including the Shinto shrines, Buddhist temples, and the great Imperial Palace were reminiscent of how life in Nara flourished during the 8th century. It experienced a fusion of the political change and cultural landscape that was taking shape.

For this reason, the historic monuments of ancient Nara were named as one of the UNESCO World Heritage Sites in Japan. It bore witness to the evolution of Japan’s architecture and art as a result of its cultural links with other countries such as China and Korea. The architectural heritage within the city also showcases how Nara developed by the time it was the capital of Japan.

To learn more about the historic monuments of Ancient Nara, you can read a detailed description on each site listed here:

Todai-ji: Also known as the Eastern Great Temple, Todai-ji Temple is the most iconic monument in this collective property on the UNESCO World Heritage Site listing. It is a Buddhist temple that was built in the early 8th century in Japan. It is under the Kegon Buddhism affiliation and is considered a National Treasure. Within the temple’s Great Buddha Hall you will find the largest bronze Buddha statue in the world. 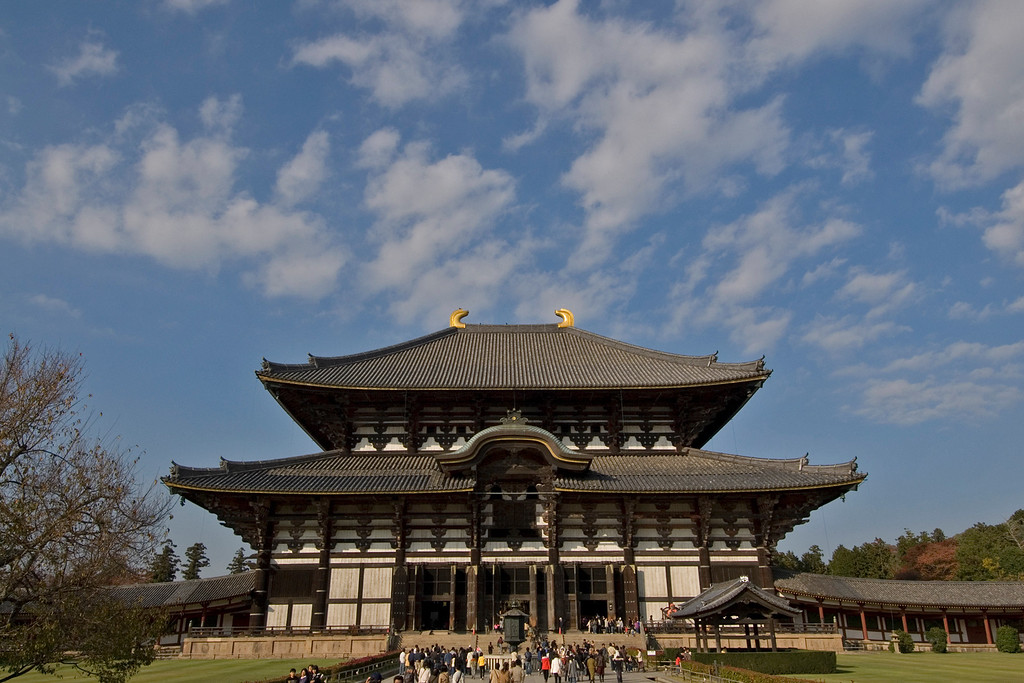 Kofuku-ji: This is another Buddhist temple recognized within the historic monuments of ancient Nara. It is also among the Seven Great Temples within Nara, Japan. The temple serves as the headquarters for the Hossu branch of Buddhism in Japan. This temple was built in mid-7th century by Emperor Tenji.

Kasuga Shrine: This shrine was founded in the 8th century by the powerful Fujiwara clan. It is also the most celebrated shrine in Nara since it was built in dedication to the deity that they believe protects the city. There are several bronze lanterns hanging all over this shrine, of which it became famous for. The main hall of the shrine is also considered a National Treasure.

Gango-ji: This Buddhist temple is one of the oldest in Japan since it was constructed in the late 6th century. It is also one of the Seven Great Temples of Nara. The original architecture was massive as it contained seven halls and pagodas; however, it underwent many renovations after being destructed by fires. 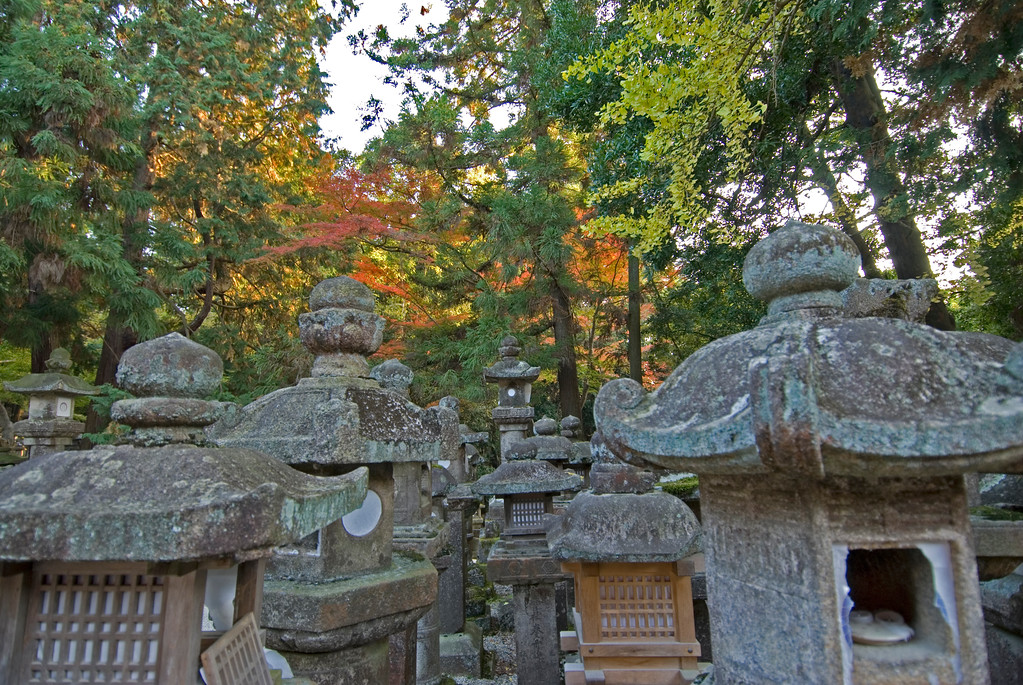 Yakushi-ji: This is another 7th century temple among the historic monuments of ancient Nara. It was Emperor Temmu who commissioned the building of the temple as a prayer for his wife’s healing. Eventually, it became one of the Seven Great Temples of Ancient Nara. The name for the temple was derived from the Medicine Buddha, Yakushi Nyorai. The East Pagoda and East Hall of the temple are considered National Treasures.

Toshodai-ji: This mid-8th-century temple is best known for its Golden Hall, which is also a National Treasure. The classic architectural detail of the hall is considered by many as the archetype of classic Japanese architecture.

Heijo Palace: This is the Imperial Palace and residence of the Emperor at a time when Nara was the ancient capital. The palace features many walled enclosures that contained the government ministries, administrative buildings, and ceremonial sites.

Kasugayama Primeval Forest: This forest is located near the Kasuga Grand Shrine in Nara. It is an old-growth forest that measures at approximately 250 hectares. Since the forest is connected with the shrine, it is considered sacred and has not been altered or touched since the 6th century. There are 175 different kinds of trees and various species of birds and insects that thrive within this forest.