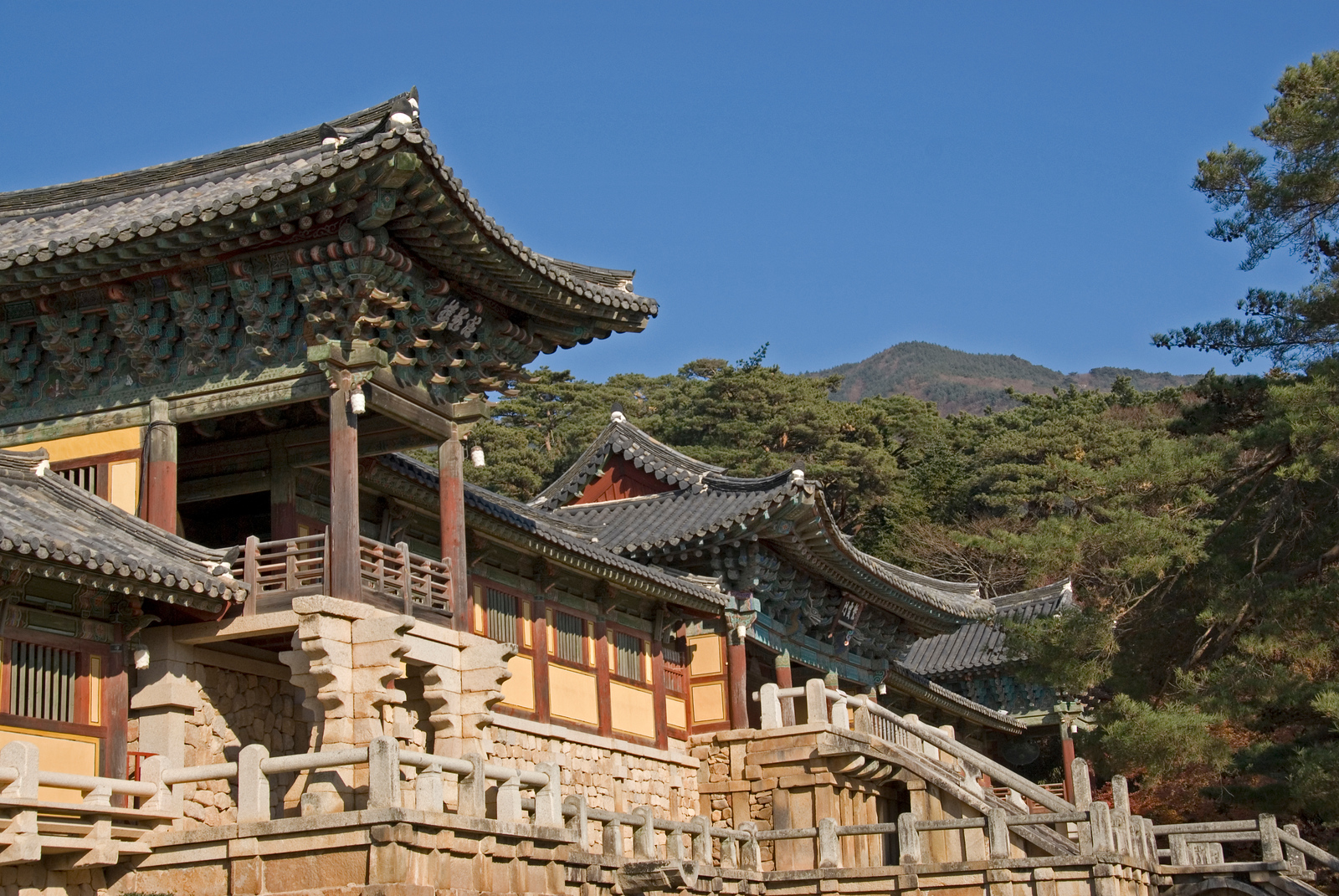 From the World Heritage inscription for Seokguram Grotto and Bulguksa Temple:

Established in the 8th century on the slopes of Mount T’oham, the Seokguram Grotto contains a monumental statue of the Buddha looking at the sea in the bhumisparsha mudra position. With the surrounding portrayals of gods, Bodhisattvas, and disciples, all realistically and delicately sculpted in high and low relief, it is considered a masterpiece of Buddhist art in the Far East. The Temple of Bulguksa (built in 774) and the Seokguram Grotto form a religious architectural complex of exceptional significance.

Located a short distance out of Geyongju, the Seokguram Grotto and Bluguksa Temple are two completely different sites put under the same World Heritage banner. The Seokguram Grotto was a real disappointment. It is much more difficult to get to, sitting on the top of a mountain, and up a winding road. You have to walk about 10-15 min to get there, and when you do get there, it is a tiny alcove where you can’t take photos, and the Buddha is walled off behind glass.

The Bluguska Temple, however, is the most impressive thing in the Gyeongju area. It was the best-preserved temple I visited in South Korea and is a rather large complex. The above photo is the front of the Bluguska Temple. Both the temple and the shrine can be visited from Gyeongju on a half-day trip via taxi or organized tour.

The Seokguram Grotto and Bulguksa Temple is a UNESCO World Heritage Site that was inscribed in 1995. It is a mid-8th century Buddhist Temple in Korea that was established during the height of the United Silla Dynasty.

These two Heritage sites represent the architectural and craftsmanship skills of the Silla people during earlier times. This is exemplified by the level of detail of the carvings and the statues within the Buddhist architecture itself. In fact, these two had been referred to as one of the best examples of Buddhist Architecture in Asia.

For this reason, this UNESCO World Heritage Site featuring the Seokguram Grotto and Bulguksa Temple is one of the most visited tourist attractions in South Korea. It is both an architectural masterpiece and holds cultural value.

There are two main attractions included within this UNESCO site: the Seokguram Grotto and Bulguksa Temple. Thus, these two are the main attractions when you visit this site. You can learn more information about each site below so you know what to expect during your visit:

This is a hermitage site that belongs to the Bulguksa Temple complex. It is considered as National Treasure in South Korea. The grotto is located four kilometers east of the temple on Mt. Tohamsan in Gyeongju. It provides an overlooking view of the East Sea with an elevation of 750 meters above sea level.

The Seokguram Grotto exemplifies one of the best Buddhist sculptures in the world. It was believed to have been originally built for by Kim Daeseong. The original name of the grotto is Seokbulsa, which means Stone Buddha Temple. The construction of the grotto started in the mid-8th century at a time wherein the Unified Silla Kingdom was at the height of its power. The grotto was completed in 774.

The Bulguksa Temple or Temple of the Buddha Land is an ancient relic in South Korea. It was built in the 8th century on a wooded slope of Mt. Tohamsan, which was once the ancient capital of the Silla Kingdom.

This temple was built in the early 6th century during the Silla Kingdom. The original name for the temple is Hwaeom Bulguksa Temple. When the temple has finished construction, it was changed to its current name.

Since ancient times and until today, the temple is home to many important cultural and historical relics. It was also designed to represent the land of Buddha, which is what the temple’s name stands for. There are three principal zones that are encompassed within the temple complex and they are 1) Birojeon or Vairocana Buddha Hall, 2) Daeungjeon or the Hall of Great Enlightenment and main temple, and 3) Geungnakjeon or Hall of Supreme Bliss. The halls of the temple are constructed using wooden materials and the roofs made of tiles. Each temple or structure is built on a raised stone terrace.